The year-end 338Canada projection: Nowhere to go for the Liberals

Philippe J. Fournier: The NDP and leaderless Greens are up, while the Conservatives aren't fading. Don't expect a snap election. 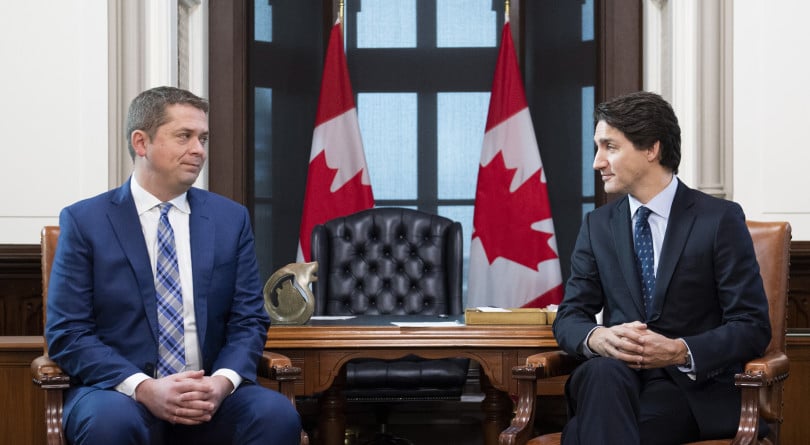 Trudeau meets with Scheer in his office on Parliament Hill in Ottawa, on Nov. 12, 2019 (THE CANADIAN PRESS/Justin Tang)

Last Oct. 21, Canadians elected a minority government for the fourth time this century. And while past minorities in Canada have lasted on average slightly over one year and a half, there is a general feeling that, barring a major scandal, this legislature could last way beyond that mark considering the Bloc and NDP both hold the balance of power, and that the Conservatives are now searching for a new leader.

Nevertheless, five polling firms have published voting intention polls in the past month, and their data have generally converged (see list of all federal polls here). Here is a quick recap:

(Note that Nanos’ federal numbers are published behind a paywall and are therefore not shown here.)

What do all these polls have in common? They all show the NDP and the leaderless Greens polling modestly above their 2019 election results. With the Greens expected to nominate a new leader in 2020, it will be interesting to see how (or whether) it will affect voting intentions. Should the governing Liberals disappoint green-leaning voters in the next 12 months, we could witness a significant shift in voting intentions—which could dramatically flip the national seat projections.

Adding these poll results to the 338Canada electoral model, here is the updated popular vote projection: 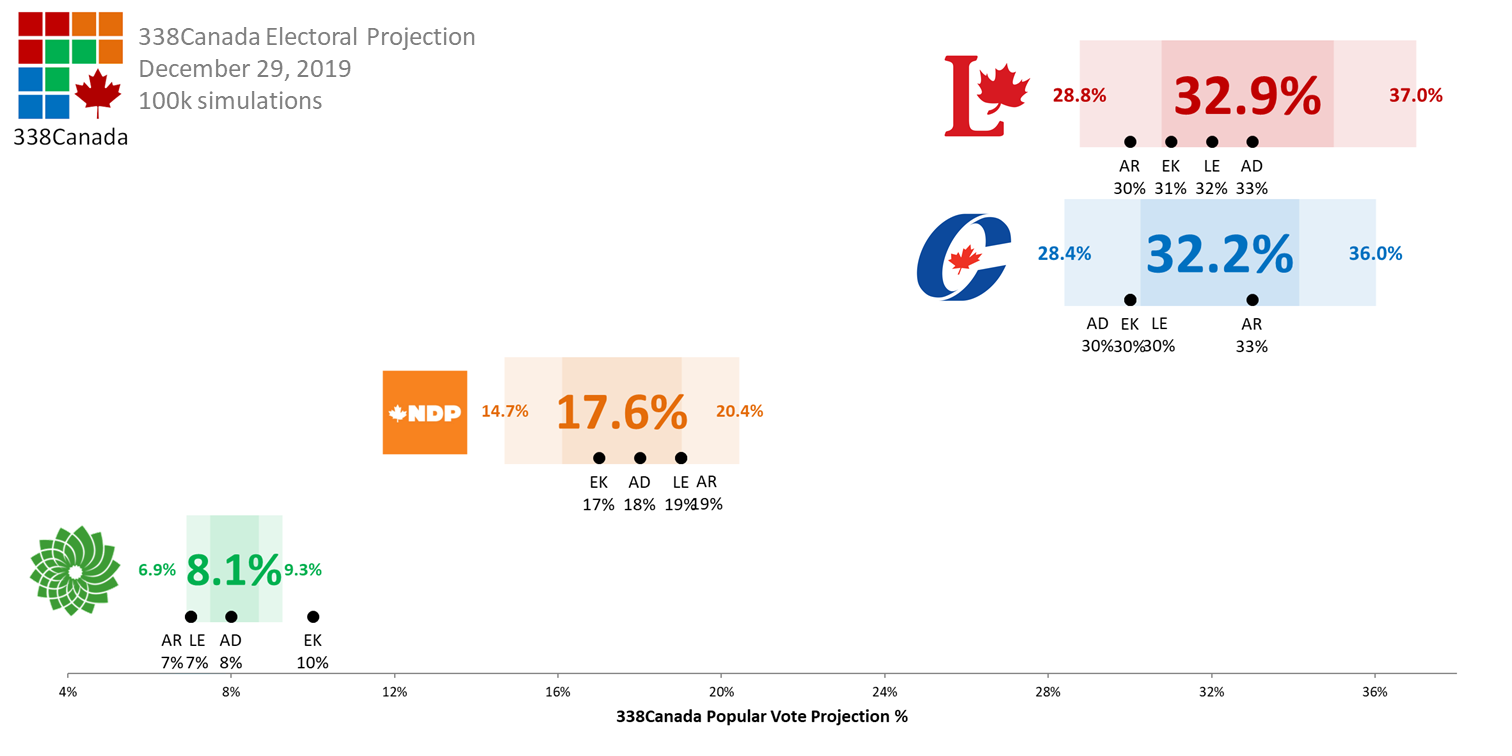 Once again, the Liberals and Conservatives remain in a statistical tie with support from nearly a third of the electorate apiece. The NDP’s average stands just below 18 per cent and the Greens hold steady at 8 per cent. The Bloc Québécois is at 30 per cent in Quebec (7 per cent nationally).

By breaking down the levels of support by provinces and regions, we calculate the following 338Canada seat projection: 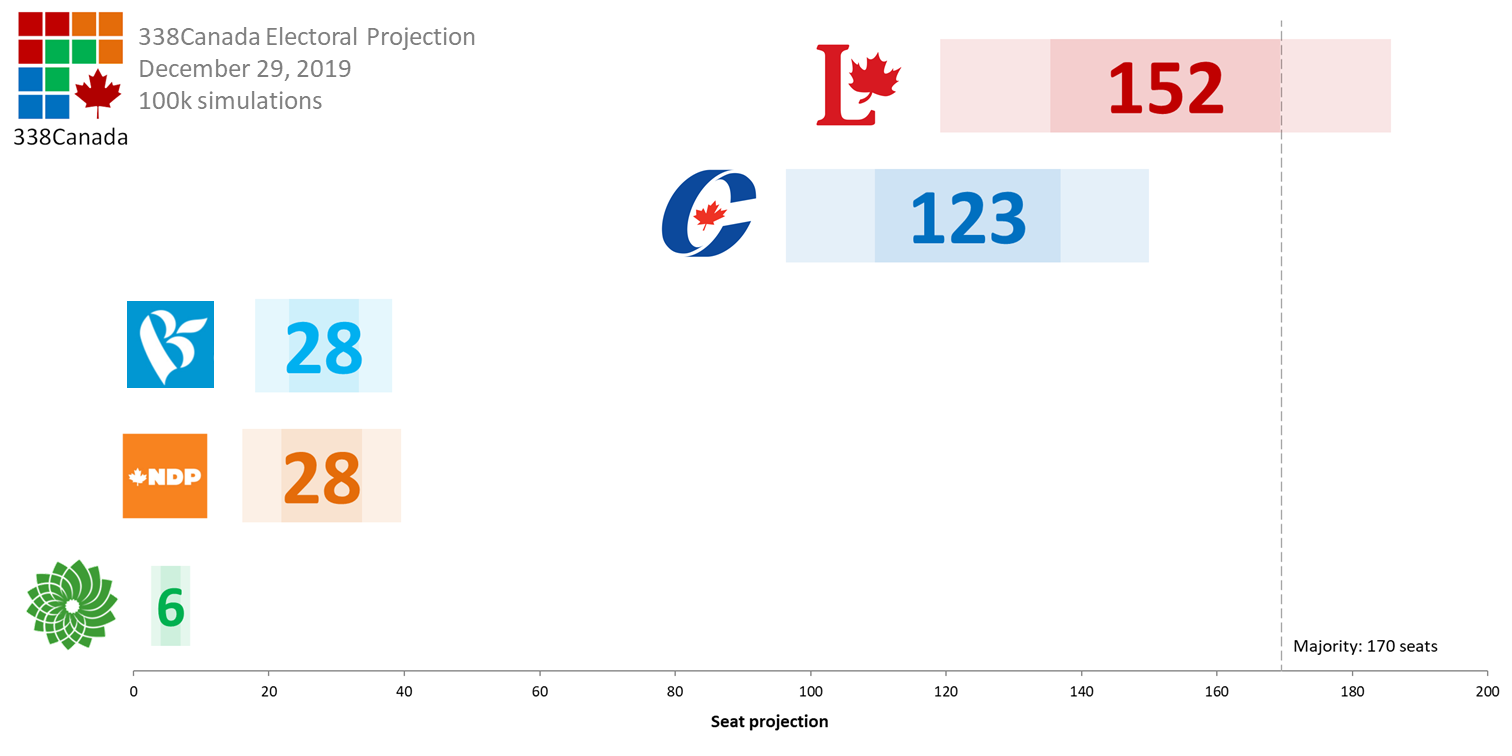 Unsurprisingly, considering voting intentions have not moved much since October, these seat averages remain close to those of the election results:

Even though the Conservatives will most likely be without a permanent leader for the better part of 2020 (more on that below), these numbers suggest a snap spring or summer election would be incredibly risky for the Liberals: The Bloc has coalesced a significant fraction of CAQ-leaning Quebec nationalists (and François Legault’s approval ratings of late have been higher than any Quebec Premier in the past 30 years); the NDP’s core base remains strong, and the Greens should be able to improve their standings—especially with a new leader. Hence, with the Conservative support’s floor most likely around 30 to 32 per cent nationally, the Liberals have little to no room to grow in the short term.

About the Conservatives: With Andrew Scheer announcing his resignation as leader  in mid-December, one might have thought the party would organize a quick, 2018 Ontario PC-style leadership race. In 2018, Patrick Brown resigned from the PC leadership in late January and Doug Ford was designated PC leader on March 11, 2018, so a snap leadership race and convention can be done. However, it was announced before Christmas that the CPC’s policy convention scheduled for April 2020 in Toronto has been postponed to November 2020 (and moved to Quebec City). Whether the new CPC leader will be chosen before then is not known for now.

There is always room for improvement, but it has been a fairly good year for Canadian pollsters: the Alberta, P.E.I., Newfoundland and Labrador and Manitoba provincial elections yielded mostly expected results, and the federal election was almost called spot on. In 2020, we look forward to several significant leadership races: federal Tories and Greens, the Quebec and Ontario provincial Liberal parties, the Parti Québécois, and the B.C. Greens. We will also keep an eye on the Saskatchewan general election scheduled for Nov. 2.

Oh, and we will take an occasional peek at what’s going on south of the border.