The year in parliamentary democracy 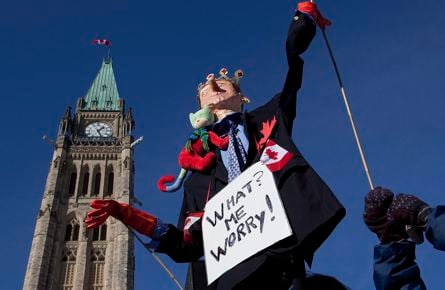 You have to remember how this started, how 2009 ended and how 2010 began. How the Prime Minister rang up the Governor General and asked her to prorogue Parliament until March. How this was hailed as “devilishly clever.” How someone started a Facebook group to protest the gratuitous use of an arcane Parliamentary procedure. How 200,000 people made the tremendously small effort of registering the requisite click to join that group. And how 20,000 people stood in the cold on a Sunday afternoon in their various towns in January to demand that the House of Commons return to work—work that we otherwise mostly ignore, but work we apparently want to know is going on all the same.

Before the Peace Tower on Parliament Hill, 3,500 people stood on the front lawn, singing and chanting and shouting. It was insistent and demanding and disgruntled. It was quaintly committed to the institutions and principles of parliamentary democracy. It was an incredible noise. However fleeting that moment now seems.

Whatever the government’s explanations—let us pause here to remember the “recalibration” that briefly resulted in a promise to study the national anthem’s gender inclusiveness—it seemed then that the Prime Minister merely desired a few more weeks without the opposition’s incessant questions about the treatment of individuals detained and transferred during the military mission in Afghanistan. That he simply wished to enjoy some quality time with Wayne Gretzky without having to worry himself over such complicated matters of human rights, international law and modern warfare, not to mention the small matter of the House’s demand that his government produce all documents relevant to the matter forthwith.

Days after Parliament returned, with neither prorogation nor Sidney Crosby’s winning goal seeming to have dampened the opposition’s enthusiasm for disclosure, a new proposal: an independent review of documents by an esteemed former justice of the Supreme Court. Alas, not even that could sufficiently shake those set on a showdown. Indeed, two weeks later, the House of Commons effectively pushed all its chips toward the middle of the table—three members, one from each opposition party, rising to claim a breach of privilege. Five weeks later, the Speaker delivered his ruling.

Of that this must be said: it only reaffirmed the basis upon which this country’s functional democracy was created and has continued for 143 years.

For the sake of posterity, the ruling will be recorded as a response to those three members—the Liberal Derek Lee, the Bloc’s Claude Bachand and the New Democrat Jack Harris. All have assured that they will be mentioned in the footnotes of future attempts to explain how we govern ourselves. Mr. Lee is a keen man of procedure. Mr. Bachand is another of his side’s spirited hectorers of the government side. And from the far end of the room, often this year there was Mr. Harris and his gruff Newfoundland brogue (or perhaps it’s more of a twang). Here sometimes seemed a man who would set his teeth into your pant leg and not let go. That he and his party refused to go along with the negotiated agreement that followed the Speaker’s ruling and that they now pursue the participants from the outside is perhaps the only reason to believe the process will come to anything. Surely, if only to avoid proving them right, the Liberals and Bloc will be compelled to carry out their duties. Such is democracy. Or so we can hope.

Now for sure would be a good time for some obviously laudable democracy. Now would be a good time for that which perhaps defines the House’s best voices: measured, but unrelenting, insistence. For underpinning so much of what was said this year about this place, these people and our politics was dissatisfaction and disappointment. You can quibble with those who too excitedly shout about crisis and catastrophe. You can mock the facile laments for decorum and civility. You can reject the proposed remedies. But you cannot entirely dismiss the lingering feeling that something is not quite right, that even if we cannot quite express what is wrong, even if we know it could be worse, we wish it could be somehow better. Maybe it has always been so. Maybe that doesn’t make the current disappointment any less relevant.

If there was any response this year for those people on Facebook—however many are still paying attention—and all those who have subsequently lamented for it all, it was that ruling. Years of unanswered questions had compelled a demand from the House. The Prime Minister called the Governor General. Those 3,500 people stood on the lawn. Those three MPs stood and insisted on their rights. And the Speaker ruled. In that there was the most important affirmation of the year: that in the 308 individuals who are beholden to us rests both the power and the responsibility. Be it theirs, and thus ours, to hold high.