Full house: The zany antics of Trudeau and his landlord, the GG

When the GG is your landlord, even pizza night is constitutionally interesting. Scott Feschuk on the PM-designate's living situation 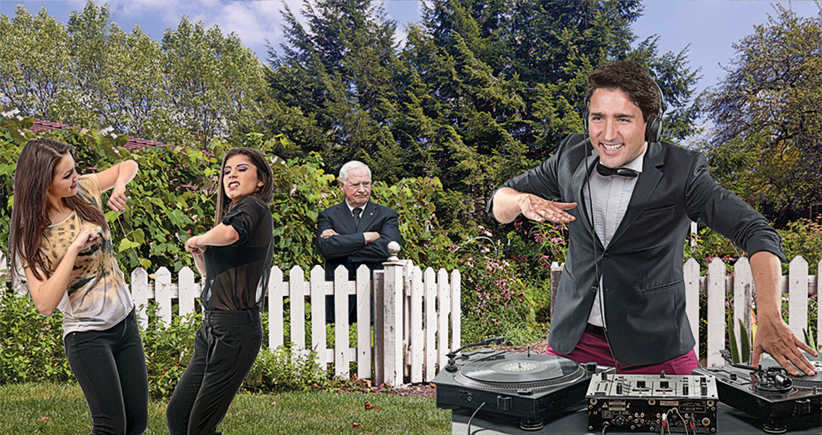 With 24 Sussex in need of repair, Justin Trudeau and his family are moving into a cottage on the grounds of Rideau Hall, home to the Governor General. As a country, we now have licence to consider our new prime minister the Kato Kaelin of public life—just crashing in the guest house until he gets his act together. Your Excellency, is it okay if I pay this month’s rent in empties and karma?

In the wake of the news, a number of Twitter users posed questions about this unusual living arrangement. In service to our democracy, I answer some of these actual queries below.

Is the Governor General required to help the PM move in?

Constitutionally, this is a grey area. Most scholars believe it would be prudent for David Johnston, the Queen’s representative in Canada, to watch secretly from a distance—then swoop in to lug the last few cushions. Under our system of constitutional monarchy, the Governor General would thereby be empowered to participate in post-move beers.

Do you think the proximity will affect the relationship between the two men?

If they’re like most neighbours, they’ll chat maybe three or four times a year, then hustle inside to ask their wives, “What’s his name again?”

How bad can 24 Sussex possibly be?

It’s a great place to live if you enjoy nature—especially specific parts of nature, like asbestos, decay and somehow ice-cold breezes, even though, technically, you are inside. When I worked for Paul Martin more than a decade ago, one of the housekeepers and I were watching The Young and the Restless together —the ironing board from the 1950s and the computer from the 1980s were in the same basement room in the 2000s—when, out of nowhere, she declared: “This place is a dump.” Correction: heritage dump.

Few debates hold greater potential for constitutional acrimony. Happily, our 148 years of history as a nation have defined through precedent the duties that govern this scenario. It is the GG’s responsibility to provide “valued counsel” on choice of toppings, emphasizing the value of balance between meat and vegetable. The prime minister takes this recommendation under advisement, then orders a Hawaiian. Tradition dictates that the GG pretend to enjoy his slice, all while slipping chunks of pineapple into the crack of the sofa. This is how Lord Tweedsmuir and William Lyon Mackenzie King spent every Friday night.

What will be the biggest lifestyle change for the GG?

This will be a period of adjustment for both men. Trudeau is not going to have the same freedom he would have had at 24 Sussex. The grounds of Rideau Hall welcome hundreds of thousands of Canadians each year. Not all of them are going to want to see Ralph Goodale doing cannonballs.

Isn’t there a power imbalance here? Sure, the GG is technically the landlord, but the PM has all the practical muscle.

Not so. The GG does have some measure of recourse. For instance, among his many duties, the Governor General is head of the Canadian Heraldic Authority. He therefore has the power to decree that, for today and all time, the Trudeau family’s coat of arms shall consist of three bare-naked rear ends, one of which has a fart cloud coming out of it. Believe you me: That’s a useful bargaining chip.

The Governor General can also use his legislative role to strategic advantage on the home front: “You want royal assent to make weed legal? Maybe take down those damn Christmas lights. It’s April, buddy.” That said, Johnston must take care not to escalate the feud too far. “Get off my property” sounds far more intimidating than “Get off the property bequeathed to my ceremonial office as a pastoral relic of our colonial past.”

If the PM has a get-together that “be bumpin’, ” can the GG prorogue the party if the music is disturbing the vice-regal rest?

Most experts believe the Governor General is obliged to act in a more measured fashion, perhaps first placing the occupants of Rideau Cottage on “double-secret probation” or, alternatively, telling the Queen on them. But the larger point is this: When it comes to late-night noise, it would be wise for Trudeau and family to tread lightly. Never go to war with a neighbour who has access to untold numbers of ceremonial trumpets.