There's no national action plan on the MMIWG crisis, and the clock is ticking 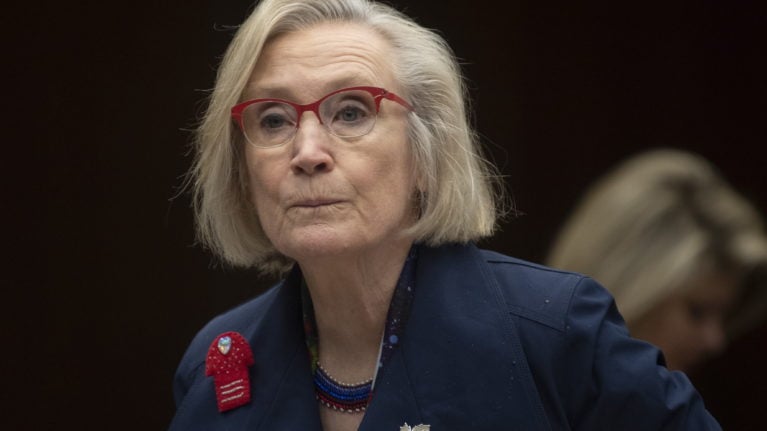 Crown-Indigenous Relations Minister Carolyn Bennett takes her seat as she wait to appear before the Indigenous and Northern Affairs committee in Ottawa on March 10, 2020. (Adrian Wyld/CP)

Yesterday marked the one-year anniversary of the Liberal promise to create a national action plan to fight the crisis of missing and murdered Indigenous women and girls. The government marked the occasion with a press release signed by six cabinet ministers that lists a handful of legislative measures passed in response to the final report of a national inquiry. They also recommitted to a national action plan, though with no timeline. The lack of a concrete plan has not gone unnoticed. Most major Indigenous organizations across Canada demanded more.

The watchdogs cometh: “We need a plan as soon as possible.” That’s the concerned opinion of Yves Giroux, the parliamentary budget watchdog who joined Paul Wells on Maclean’s Live last night, when it comes to the future of federal finances. Wells asked Giroux what he worries about most. “We may have collectively lost a sense of perspective,” he responded. “Spending a billion dollars on something is now barely noticeable.”

The only analysis of spending comes from Giroux’s PBO. There’s “nothing whatsoever” from federal officials, who are “governing by cabinet.” The mild-mannered Giroux, an economist by training, sounded something approximating agitated.

Wells’s second guest was fellow watchdog Caroline Maynard, the information commissioner who recently warned cabinet that the system overseeing public information disclosure is teetering on the brink. Maynard was cautiously optimistic that her warnings won’t fall on deaf ears. She said the coronavirus pandemic could force the paper-obsessed federal bureaucracy to finally shift into the digital word. She said public servants sometimes prefer carrying stacks of paper into meetings instead of the laptops that have all the same files. That culture may slowly be evolving.

Ontario Premier Doug Ford openly threatened commercial landlords yesterday. Asked about low take-up for a federal-provincial rent relief program budgeted to spend more than $900 million, the premier said property owners are playing chicken. “What they’re doing is they’re testing me,” he said. “We’ll give it a few more days, then we’ll act.” Small biz advocates have called for a ban on evictions to convince landlords to offer the relief. Ford kept teasing that he would do something. “They want to keep pushing us?” he said. “Stay tuned.”

Stockwell’s day: Telus and McMillan LLP have one more vacancy in their shops today than they did yesterday. Stockwell Day, the former leader of the Canadian Alliance who eventually served in Stephen Harper’s cabinet, more recently sat on Telus’s board of directors and worked as a senior advisor at McMillan. On Tuesday, Day told CBC’s Power & Politics that systemic racism is not a problem in Canada. A day later, he stepped down from Telus and resigned from McMillan. Neither move appeared to be much of a choice. But he won’t be explaining himself on P&P any time soon.

I Spy: It’s so last month to have fun dissecting the working-from-home backgrounds our elected people. But still, Finance Minister Bill Morneau‘s taped farewell to Bank of Canada governor Stephen Poloz revealed a bookshelf heavy with political texts: Titans, Peter C. Newman’s third take on Canada’s rich and powerful; C.D. Howe, the biography of a powerful cabinet “minister of everything”; No Ordinary Time, Doris Kearns Goodwin’s Pulitzer-winning chronicle of FDR’s wartime presidency. Watch Morneau’s video here. Your homework is to identify the most [pick one: fascinating/infuriating/bizarre] book on the shelf and email us your answer.

A deep-sea recovery team in the Ionian Sea managed to haul up pieces of the CH-148 Cyclone helicopter that crashed within visual range of crew aboard HMCS Fredericton in April. The Department of National Defence published photos of the unmanned vehicle that dove to a depth of more than 3,000 m and some of the wreckage. The team did find remains of the air crew, but added a dark caveat: “It is unknown at this time whether we have found everyone.”

Chugging along: Back in 2016, a federal budget first mentioned VIA Rail’s proposal to launch “high-frequency” rail in its Quebec City-Windsor corridor. That plan would see more dedicated tracks and faster service. Supplementary estimates tabled in the Commons this week included $14.8 million for more of what a VIA spokesman called “technical work” that explores “interoperability and integration” of high-frequency rail with other existing transit services. Eventually, the people of Peterborough, Ont., who lost rail access to Toronto lo so many years ago might once again get their own station.