This election will be won on citizenship issues. To our shame.

From expat voting rights to deporting terrorists and rejecting niqabs, this campaign has focused on the surprising question of who gets to be a citizen 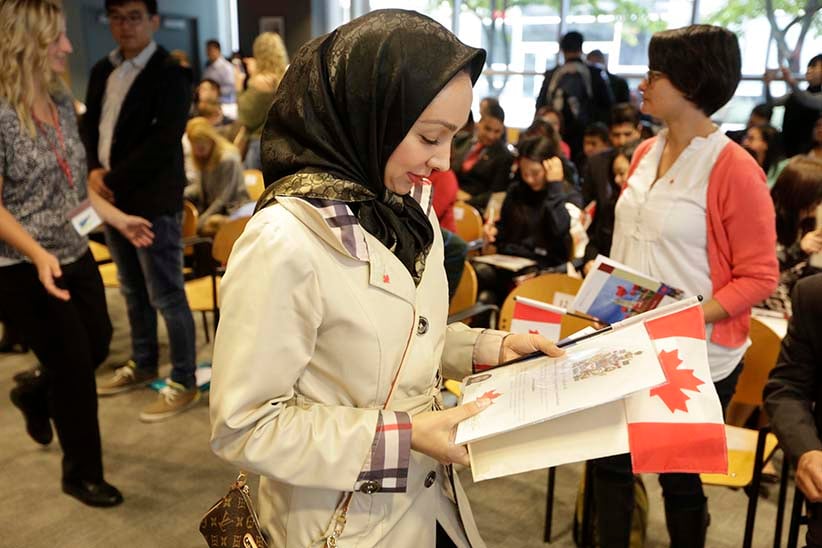 A young woman looks at her official citizenship document that she received at a Vancouver ceremnoy on Oct 6th, 2015. (Photograph by Brian Howell)

This may be remembered as the “citizenship election.” For the first time since the Second World War, we are seeing the conspicuous use of identity politics by mainstream parties on a national level. This type of campaigning haunted the 19th and early 20th century, and we thought it was gone. But, in this election, that grave has been dug up, to our shame. And the preposterous idea that some citizens are more Canadian than others is being rattled in our faces like old bones.

When the election began, I expected NDP Leader Tom Mulcair’s French passport to be the campaign’s citizenship issue. A federal politician’s dual allegiance is not necessarily problematic, but it is worth debating. It has been barely mentioned. Instead, the question of citizenship entered the race when Donald Sutherland angrily denounced the law that denies voting rights to Canadians who have lived abroad for the last five years. Other expat celebrities joined in to condemn Conservative Leader Stephen Harper for nefariously devaluing their citizenship, and one suspects he welcomed it. In Canadian politics, what offends those lined up at the Toronto International Film Festival may very well delight those lined up at the Tim Hortons in Lethbridge, Alta.

A few weeks later, the question of citizenship returned to the front pages with the refugee crisis. The debate over how many we should accept was actually about how safe our country might be, and how it would change socially and economically, if we allowed an embarrassingly small number of Syrians to become Canadians. In short, are they worthy of citizenship the same way the Kosovars or Vietnamese were?

Sadly, our national attention span is short, so our eyes soon wandered away from 60 million refugees and settled on two women who wanted to wear niqabs at their citizenship ceremony. On the surface, this seemed to be about security (how do we know it’s really them?) and women’s rights (they are being enslaved by their scarves). But, like the refugee crisis, this debate was really about citizenship: How far should we accommodate new citizens, and do we even want people like that?

Related: Maclean’s in-depth primer on where the parties stand on the niqab

Then we scuffled over stripping convicted terrorists of their citizenship. This seems reasonable, in theory. If we can revoke the citizenship of war criminals, then why not those who plot or commit mass murder? But, in practice, this is both impractical and counterproductive. Only very few convicted terrorists have dual citizenship, and even fewer nations would be willing to take them back. Ironically, if we do manage to send them overseas, our security forces will have a far harder time de-radicalizing, tracking, or stopping the terrorists than if they had remained in Canada.

And then, this week, we moved on to “barbaric cultural practices” and the Conservative promise to establish an RCMP hotline to report polygamy, child marriage and honour killings. Setting aside the fact that we already have a national hotline for these crimes (911), this also seemed like a reasonable thing to do. But, like all of the other examples I’ve listed, the Conservative party pushed this issue for less respectable reasons.

You can be sure that Immigration Minister Chris Alexander does not actually think a new tip line is an effective safeguard to prevent honour killings. Similarly, no one in Harper’s circle genuinely believes that two women in niqabs pose any threat to our social fabric, nor our security. Likewise, Harper doesn’t really worry that accepting 10,000 refugees (1/30th of one per cent of our population) over the course of two months, versus two years, will harm our country in any way. And his security experts have never suggested that the most expedient additional measure to safeguard Canadians from terrorist attacks is to strip a dozen criminals of their citizenship.

What the Conservatives do believe, however, is that encouraging one group of Canadians to fear another group of Canadians is an exceptionally effective way to get out the vote. When written so bluntly, it sounds preposterous. But that’s what identity politics is: a conscious effort to divide the body politic, and set it against itself. In this election, the CPC politicians have talked about citizenship almost constantly and, every time, it involved Muslim Canadians. Every time, it was so they could pit Canadians against Canadians.