This fall, Doug Ford is toxic

Politics Insider for Sept. 27: Doug Ford may be doing more harm than good, and Jody Wilson-Raybould is a fundraising titan 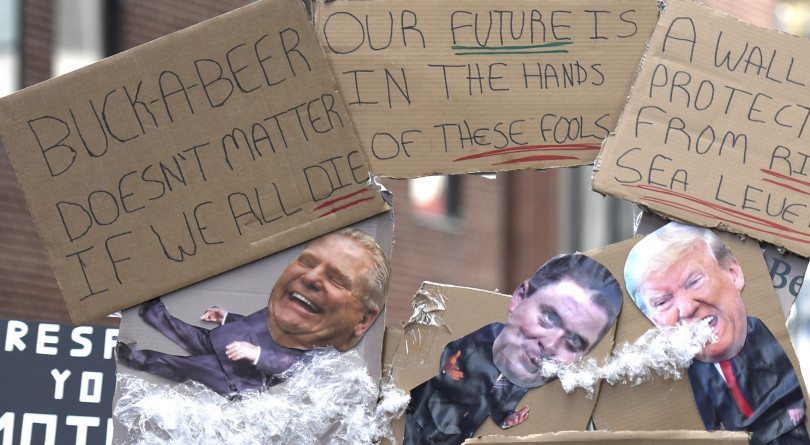 Far from Ford. Political observers have noticed Doug Ford’s absence from Andrew Scheer’s campaign trail. The distance, many believe, is deliberate, as the Ontario premier has become the second-least popular premier in Canada, expanding class sizes while effectively instating a hiring freeze that will cost the province 10,000 teachers over the next five years. His fragile records on health care and autism, combined with the number of friends who’ve found their way into high-profile positions (only to later quit or be removed), have also made him an easy target.

It’s a target Scheer would rather avoid. A new survey from the Angus Reid Institute suggests that Ford’s election last year will sway nearly half of Ontarians’ votes, with the vast majority (85 per cent) saying it makes them less likely to vote for Scheer. In short: 42 per cent of Ontarians already won’t vote for Scheer because of Ford, which is marginally higher than the average influence premiers have on federal elections (39 per cent). The Toronto area will be a decisive battleground, according to the polling institute:

Currently, 36 per cent of Ontario residents say that they will support the Liberals in the October election, while 35 per cent choose the CPC. The Liberal Party holds a commanding lead in the City of Toronto, while the Greater Toronto Area continues to be a close race. Outside of the GTA, the Conservatives are chosen by 46 per cent of residents and the Liberals by one-in-three (33%).

Notably, the NDP, Green Party and People’s Party make up one-quarter of votes in the GTA (26%), suggesting the dynamics of these parties may play an important role in deciding seats in that region.

Better off alone. Jody Wilson-Raybould and Jane Philpott, the two high-profile former Liberal cabinet ministers who quit the party in the wake of the SNC-Lavalin scandal, are running as independents this fall. Typically, independent candidates struggle with fundraising. Not so in this case.

Both women have shut down donations to their campaigns, saying they’ve exceeded their goals and don’t need any more money. Neither woman provided exact numbers, though Wilson-Raybould said she’s passed her maximum target of $200,000. As she explained it to The Globe and Mail:

People have wanted to support our campaign from across the country. I’ve never seen anything like it. People keep walking in the door, saying, ‘Can I give you money, can I take a sign, what help do you need?’…. The nature of the political discussion has caused a lot of anxiety and frustration. The revelations that came to light about [Mr. Trudeau’s] actions do not help that reality.

Lock him up? Andrew Scheer, if elected, would launch a judicial inquiry into the SNC-Lavalin controversy. His Conservative government would push to enact what they’re calling the “No More Cover Ups Act,” which would allow the Royal Canadian Mounted Police to more easily obtain evidence protected by cabinet confidence when pursuing criminal investigations. “Cabinet confidentiality exists to protect sensitive matters of policy in order to create good policy,” Scheer told reporters. “It doesn’t exist to protect corrupt leaders.”

At least he’s got a paddle. Back in 2015, Justin Trudeau went canoeing in Calgary’s Bow River, presumably to show off his athleticism and rugged Canadianess. It recalled his father’s own penchant for the paddle, which likewise earned the former prime minister praise. But now, in 2019, Trudeau’s going to need to paddle a lot harder. He appeared in Sudbury, Ont., canoeing around for the press before announcing a couple environmental initiatives: one, to carve out 25 per cent of Canada’s land and oceans for environmental protection; and two, to offer a travel bursary of up to $2,000 to low-income families who want to go camping. The Post‘s John Ivison summed it up with more than a little heat: “A future Liberal government would provide $2,000 travel bursaries to send Canadians camping. I think that might be the stupidest thing I’ve heard so far in this election.”

Full house. Congratulations to the NDP, who finally, less than a month before the election, found candidates to fill all 338 ridings in Canada. It’s a fairly diverse crowd: 166 candidates are women; 80 are people of colour; 40 are LGBTQ2; 27 are Indigenous; and 17 are living with disabilities. How many will get elected, of course, will be a whole other story.

“Unrelated reasons.” Andrew Scheer was meant to visit a cafe at the University of Waterloo, but a crowd of around 50 students began protesting as soon as his bus arrived. So the bus kept moving⁠—but not, Tories claim, because of the protesters. They say road construction and tight time constrains forced them to cancel the appointment in favour of a different stop: L.A. Franks, a hot dog joint literally 600 metres away from the campus cafe.