This repatriation ceremony was not like all the others

Politics Insider for May 7: Tories have a broadband plan, the nation's capital finally lightens up and Shopify soars to new heights 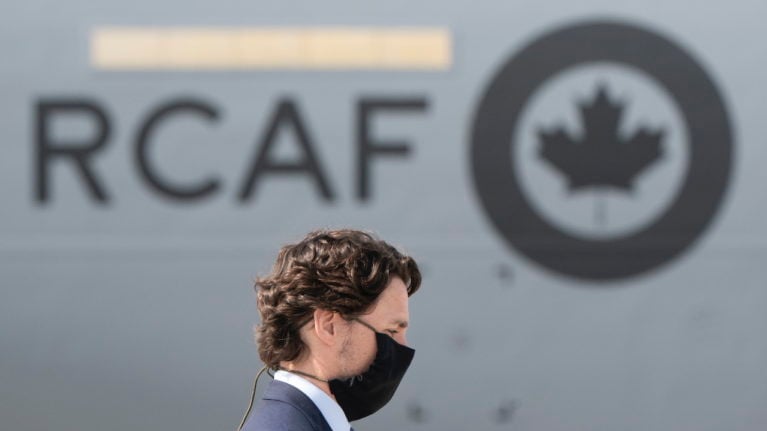 Prime Minister Justin Trudeau attends a repatriation ceremony for the six Canadian Armed Forces members killed in a helicopter crash off of Greece during Operation Reassurance, at CFB Trenton, Ont. on Wednesday, May 6, 2020. (Frank Gunn/CP)

Justin Trudeau was in Trenton, Ont., yesterday for the repatriation ceremony that honoured six military personnel who served on HMCS Fredericton and died in a helicopter as it plunged into the Ionian Sea, between Greece and Italy.

The PM joined Governor General Julie Payette, Defence Minister Harjit Sajjan and Chief of the Defence Staff Jonathan Vance. All wore black masks. Trudeau met privately with the families of the fallen before the repatriation ceremony.

During the war in Afghanistan, when hearses drove from Trenton to Toronto along Highway 401—dubbed the “Highway of Heroes”—they’d pass Canadians paying solemn respects across bridges spanning the freeway. Often, those onlookers held hand-drawn signs. They always waved flags. Yesterday, public officials discouraged those tributes amid the pandemic—and asked that if residents along the way did gather, to do so at a safe distance.

Of course, people did assemble along the route yesterday—beside the road to the highway, overtop the very first overpass, in Port Hope, Oshawa and Scarborough, and outside the coroner’s office that will examine the body of Sub.-Lt. Abbigail Cowbrough. And yes, flags waved in the breeze.

If constructive opposition is what the Liberals want as they govern during a pandemic, they might pay attention to a hefty Conservative consultation document with recommendations on how to get top-notch broadband to rural Canadians. The Tory proposals to “end the digital divide” between cities and Canada’s hinterland enjoy “broad support within the caucus.”

As coronavirus infections peak and regional economies slowly start to open up, Export Development Canada‘s analysis of six major cities reveals that mobility is on the rise—with one major exception. Public transit ridership has not returned.

“Oil is dead”: Those were the words of Green parliamentary leader Elizabeth May, who called for the energy industry to transition away from fossil fuels. “My heart bleeds for people who believe the sector is going to come back. It’s not,” she said. Not to be outdone, Bloc Québécois leader Yves-Francois Blanchet dismissed the “tar sands” as “condemned. NDP leader Jagmeet Singh avoided similarly harsh language, emphasizing the need for renewable sources and noting the “tough decisions” facing the industry.

Ottawa—that is, the city itself, not the short-hand for everything federal—has taken a public-relations beating for its overbearing restrictions on where residents can go in the age of the pandemic. Mayor Jim Watson refuses to open streets to pedestrians, public-health officials appeared to forbid neighbourly beer visits, and the city briefly prohibited any visits even to the windows of long-term care facilities. Yesterday, Watson relented. The mayor announced the re-opening of city parks—subject, of course, to physical distancing.

Eighty-five per cent of Canadian meat is processed at just three plants, and coronavirus outbreaks have hit two of them. The Financial Post dives deep to answer the question: How did that industry become so mega-concentrated?

Speaking of the nation’s capital, one of its homegrown tech firms, Shopify, breezed past RBC to become Canada’s most valuable company with a market capitalization of $121.5 billion. The Globe and Mail reminds us that two other breakout Canadian tech stars—Nortel Networks and BlackBerry—both soared to similar heights, only to crash back to Earth.

The Canadian Press reported that Canada paid up its annual contribution—USD$70 million—to the joint strike fighter program that’s developing the F-35, a fifth-generation jet that might or might not form the future backbone of the Royal Canadian Air Force. The feds says Canadian companies have scored $1.8 billion in development work. Maclean’s has asked for a breakdown of that work. We’ll report back on which parts of the F-35 have Canadian fingerprints all over them.

Yours to discover: For Ontario drivers, it’s out with the new and in with the old. Premier Doug Ford announced an official return to the province’s white plates with blue embossed text. The new models, which flipped the colour scheme, were famously hard to read when the sun went down.

We owe some congratulations to Brian Smith, a regular reader from Delta, B.C., who submitted the correct title of that book sitting on MP Tom Lukiwski‘s desk. Brian’s email came in under the buzzer, so half the bragging rights are, in fact, his.