Philippe J. Fournier: The Conservatives may be on their way to sweep Alberta, but this race—still too close to call—will be decided elsewhere 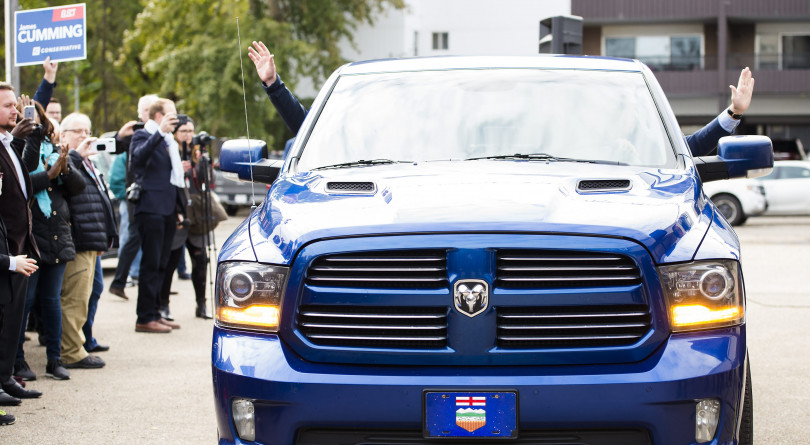 Scheer and Alberta Premier Jason Kenney wave as they arrive during a campaign stop in Edmonton on Sept. 28, 2019 (Nathan Denette/CP)

New federal polls were published this week as the 2019 campaign enters the home stretch with three leaders’ debate in a span of 8 days. Here is a short recap of the latest numbers:

We also add to the 338Canada model numbers from Mainstreet Research/iPolitics and Nanos/CTV News/The Globe and Mail. Both these rolling polls can be found behind a paywall (follow links to subscribe). All federal polls are listed here.

With only 18 days to go until election day, the topline numbers remain mostly stable: The Conservatives (34 per cent) and Liberals (33 per cent) are in a statistical tie with the slightest of edge going towards the CPC. Here is how the 338Canada projection compares with the latest polls: 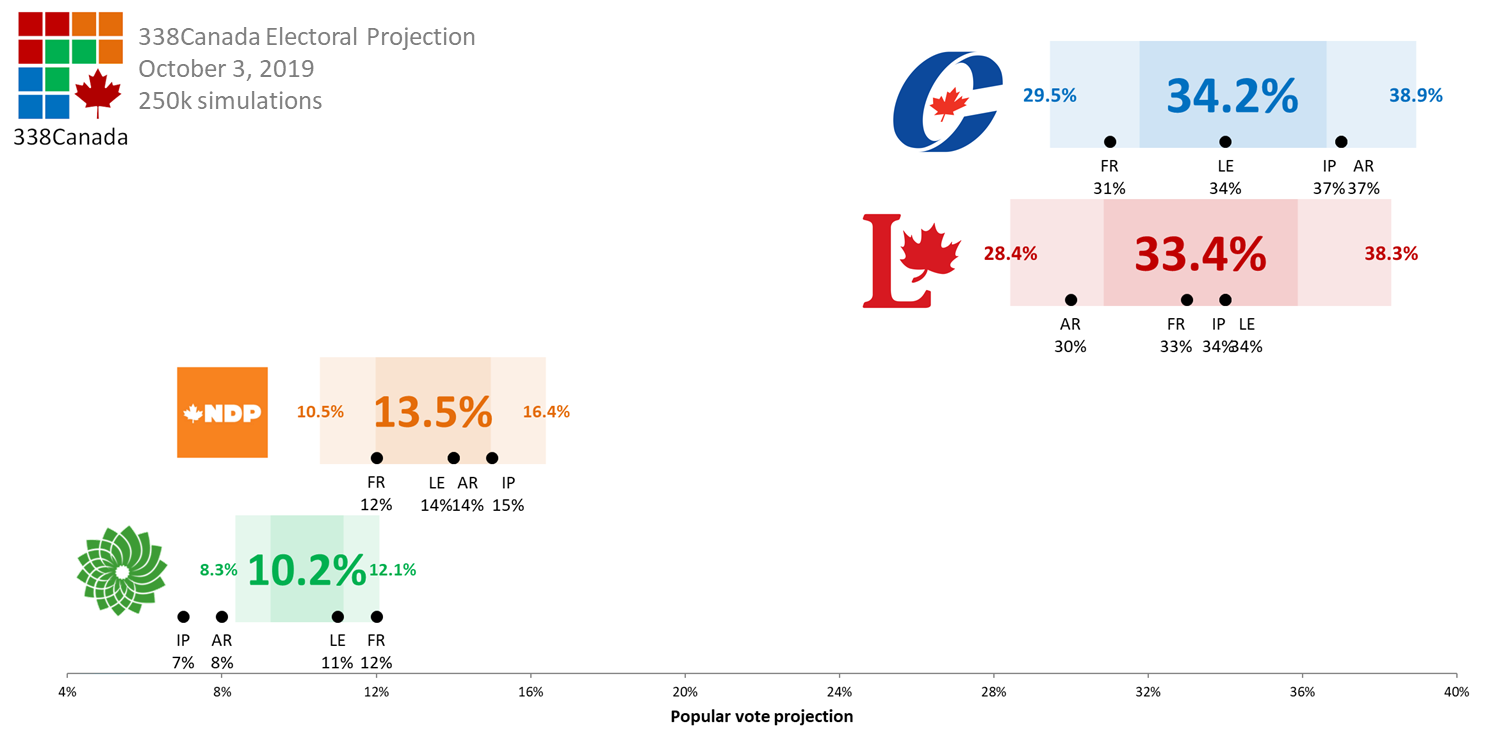 The NDP remains a distant third in voting intentions and, as we will see below, will be fighting to keep official party status, whose threshold is set at 12 seats.

Green Party support varies significantly from firm to firm, but average support remains stable at about 10 per cent.

Maxime Bernier’s PPC’s average is at 3 per cent. In Quebec, the Bloc québécois stands at 22 per cent, tied with the Conservatives for second place in the province.

How do these levels of support translate into the seat projection? Here: 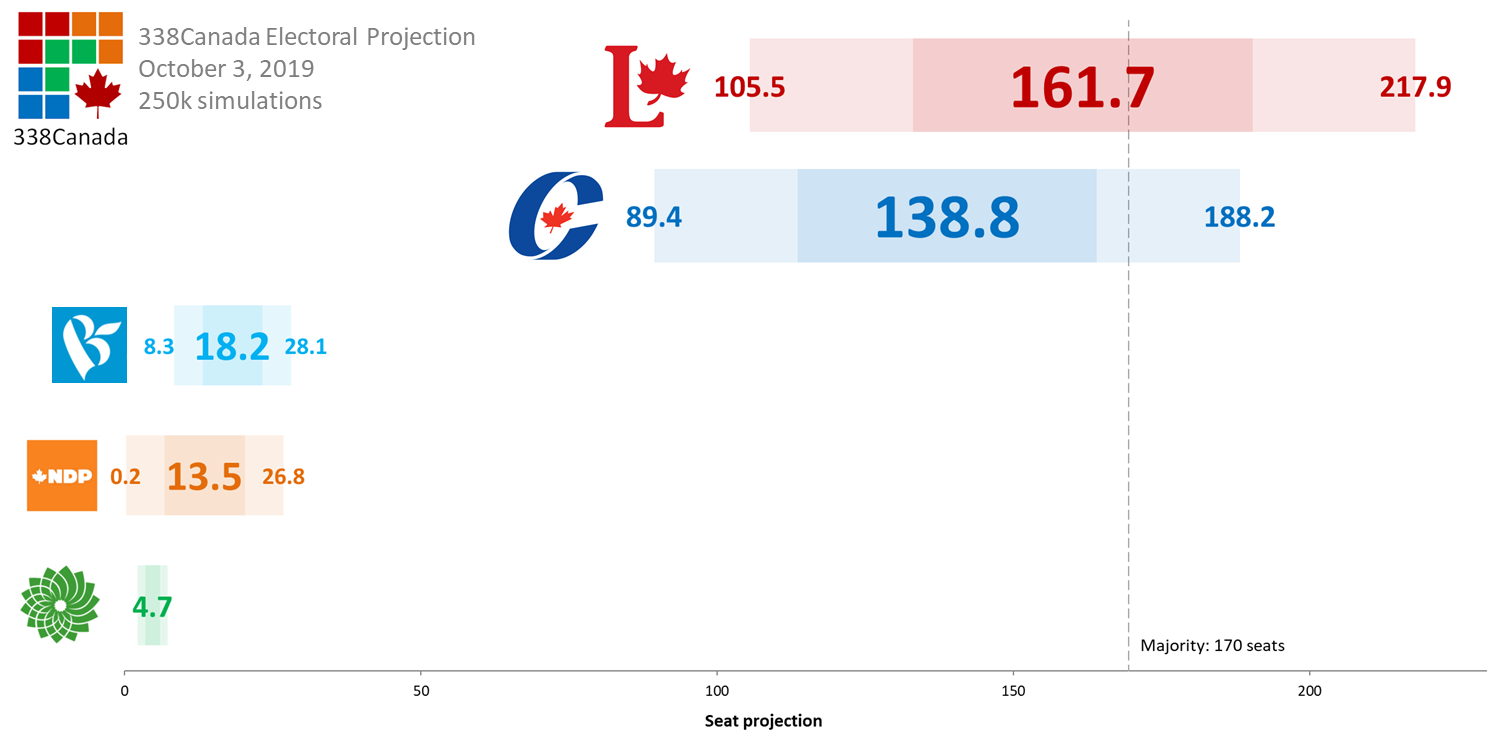 The Liberals are currently favoured to win the most seats with an average of 162, compared to the Conservatives’ 139. However, we see from the graph above that confidence intervals of the two parties still overlap significantly. A normal polling error in favour of either parties could dramatically alter the seat totals—especially in Ontario and Quebec.

In third place with an average of 18 seats is the Bloc québécois. Recent gains for the Bloc in Quebec (mostly at the expense of the CPC) could help Yves-François Blanchet and his team increase their seat count, especially in rural Quebec where many close races are currently projected.

With the numbers above, the Liberals win the most seats in just under 64 per cent of all 250,000 general election simulations performed by the model. Nevertheless, if these numbers were to hold all the way to Oct. 20, the election would most likely be too close to call. The gap in the seat projections between the LPC and CPC is much smaller than the model’s uncertainty. 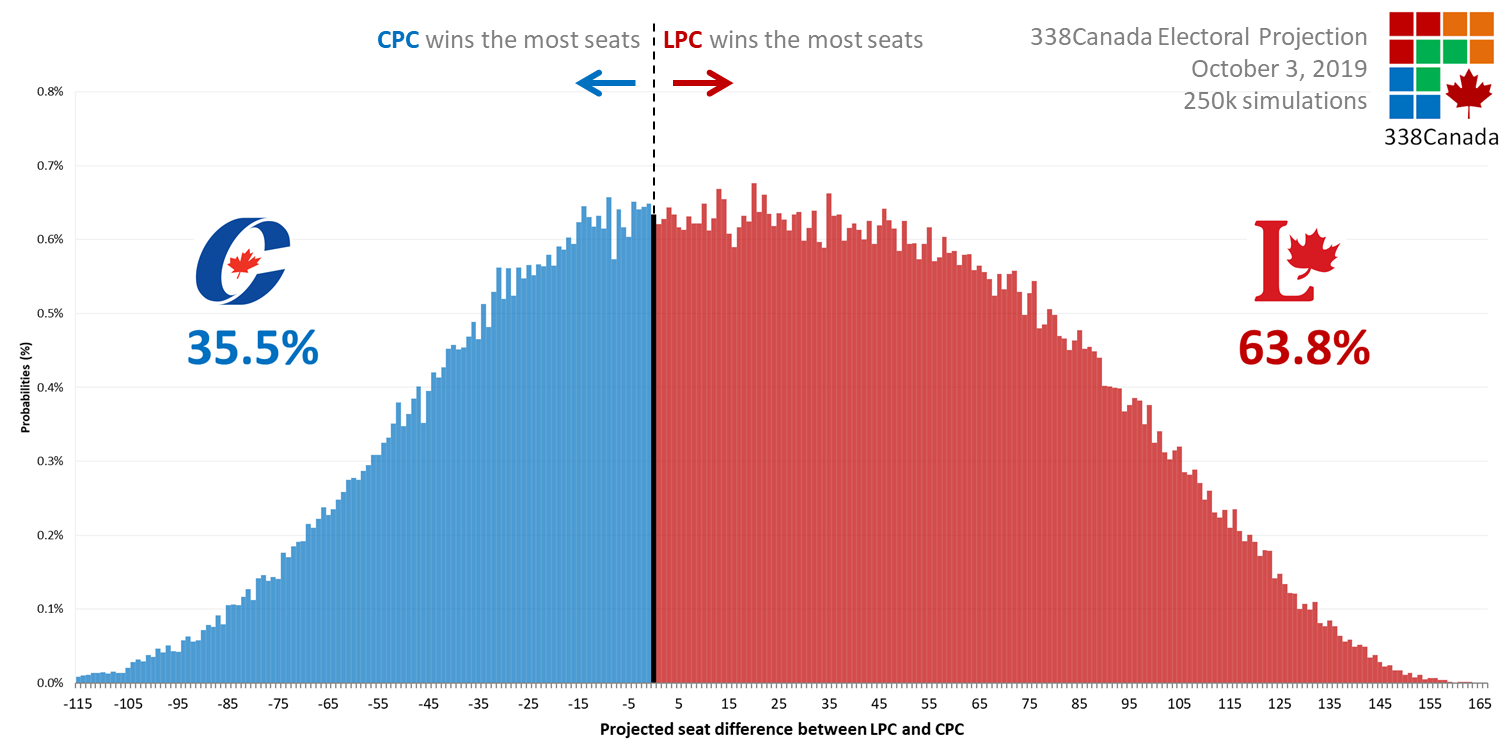 I published on social media some regional projections earlier this week, and none received as much attention as the Alberta seat projection. See graph below: 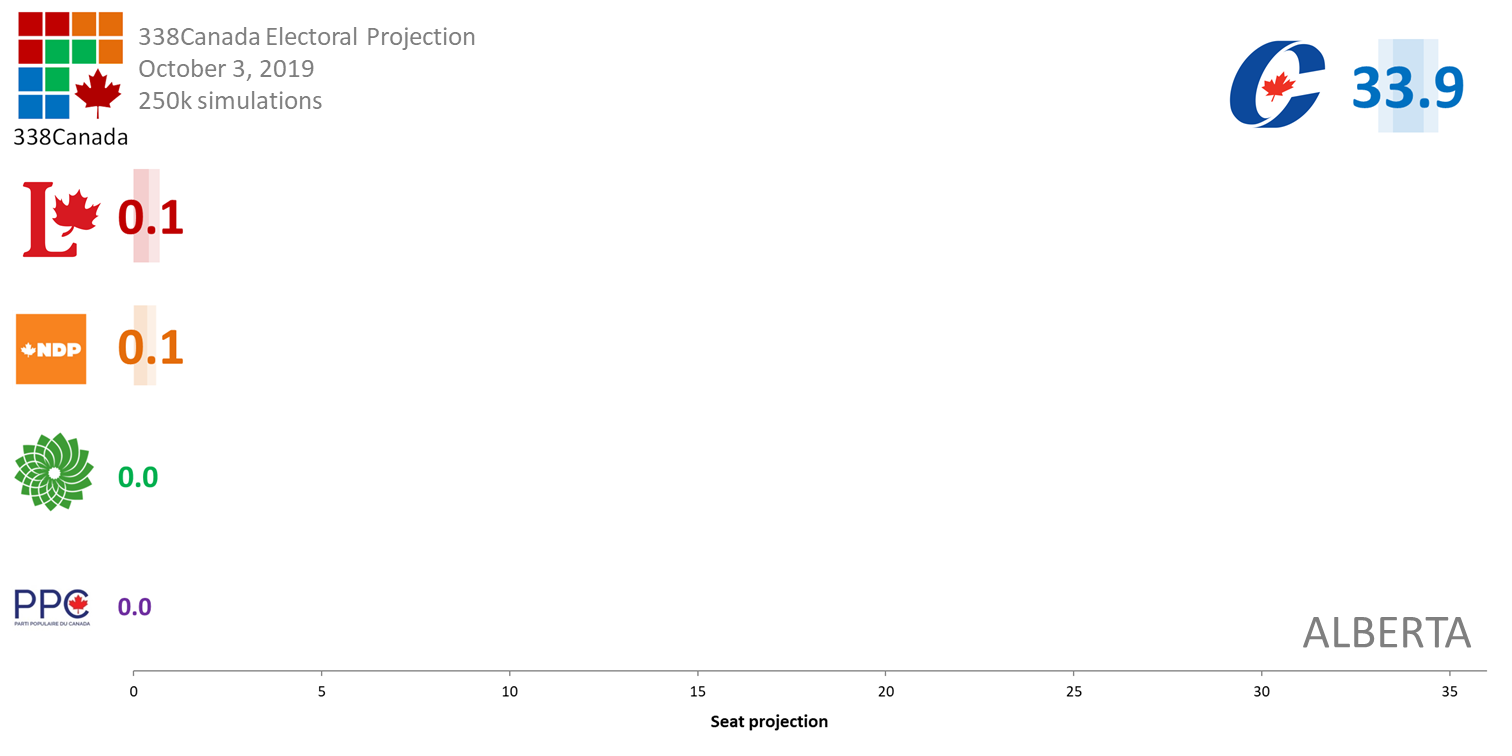 According to national and regional numbers that have been made available so far, the Conservatives appear to be on their way to sweep all 34 Alberta federal districts.

In 2015, with 25 per cent of the Alberta popular vote, the Liberals had won four seats in the province (two in Edmonton and two in Calgary). The NDP had held on to Edmonton-Strathcona. However, as it stands right now, both the Liberals and the NDP have fewer than 10 per cent odds of winning a single Alberta seat.

Alberta voters, although certainly not unanimous, appear overwhelmingly behind the Conservatives in this election: the polling average has the CPC at close to 64 per cent in the province, almost 50 points (!!) ahead of their competitors.

While Alberta Conservatives will rejoice at the news of their dominance on the federal scene, it also means that Alberta will have painted itself in a corner for this election and, in the end, will not be a major factor in the race. Safe seats of whatever colour tend to be taken for granted for the dominant party and simply ignored by the others since giving them any attention would be wasted time and resources.

Unfortunately, for either Andrew Scheer and Justin Trudeau, it would not make strategic sense to spend the remaining days of the campaign talking (and listening) to Albertans, the same way the Liberals will not spend precious resources on their safest seats in the western half of Montreal or in Toronto. Such is the reality of the first-past-the-post electoral system.