Philippe J. Fournier: A big shift in Quebec has changed the election picture with 10 days to go. Gone are the good odds of a Liberal majority. 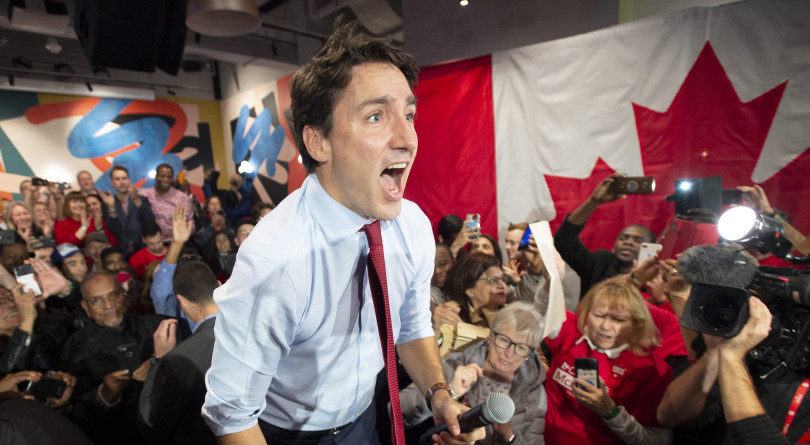 Trudeau reacts to supporters at an early morning rally in Ottawa on Oct. 11, 2019 (THE CANADIAN PRESS/Frank Gunn)

There has been significant movement in the seat projections in the last few days and, as we enter the final stretch of the 2019 federal election campaign, the prospect of a minority government has grown significantly. Let’s dive right into it and recap the most recent numbers:

Naturally, all of these polls paint a starkly different picture when taken individually: Angus Reid’s numbers would probably mean the Conservative are headed towards a majority (or very close to it), whereas Innovative and Nanos’ data would lead to the Liberals winning the most seats (although not necessarily a majority). Conversely, Léger and Mainstreet’s numbers would most likely translate into a hung parliament.

Let’s add all of these polls (and many others, see full list here) to the 338Canada federal model. Here’s the projection update for October 11, 2019.

Somewhat amazingly, we still have a dead heat in the popular vote projection between the Liberals and Conservatives with 10 days to go until election day. Consider the following graph: 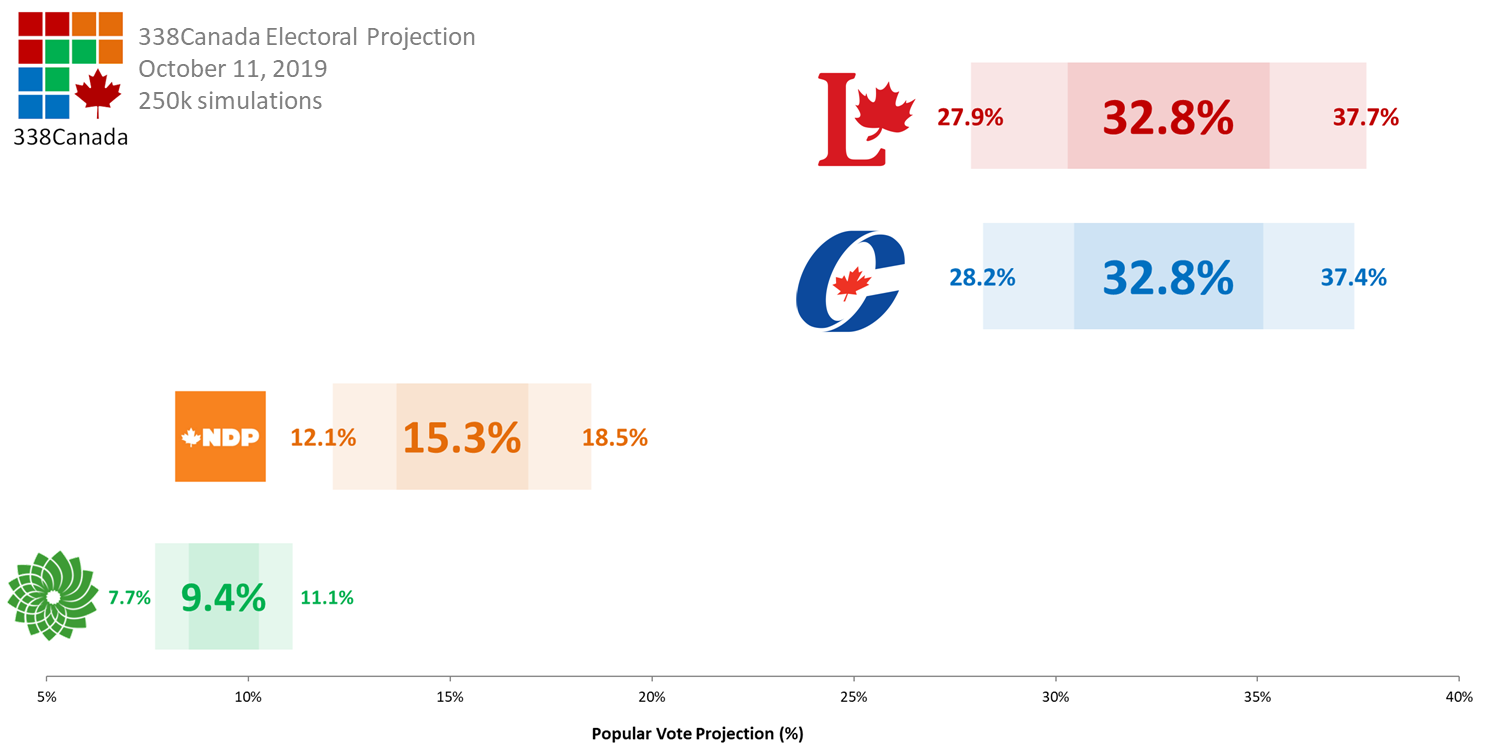 Since the TVA debate last week, the NDP has also grown its national support and has distanced itself from the Greens. The NDP’s average is now 15 per cent—the highest level since the campaign began.

With a still significant lead in Ontario and the Atlantic provinces, the Liberals remain ever so slightly ahead in the overall seat projection. However, the rise of the Bloc Québécois has both 1) hindered any hope the Conservatives had to make gains in the province, and 2) started to eat away at seats the Liberals were hoping to pick up from the New Democrats.

Additionally, the recent fluctuations in the numbers have increased the projection’s uncertainty, especially in Quebec and B.C. Here are the seat projections: 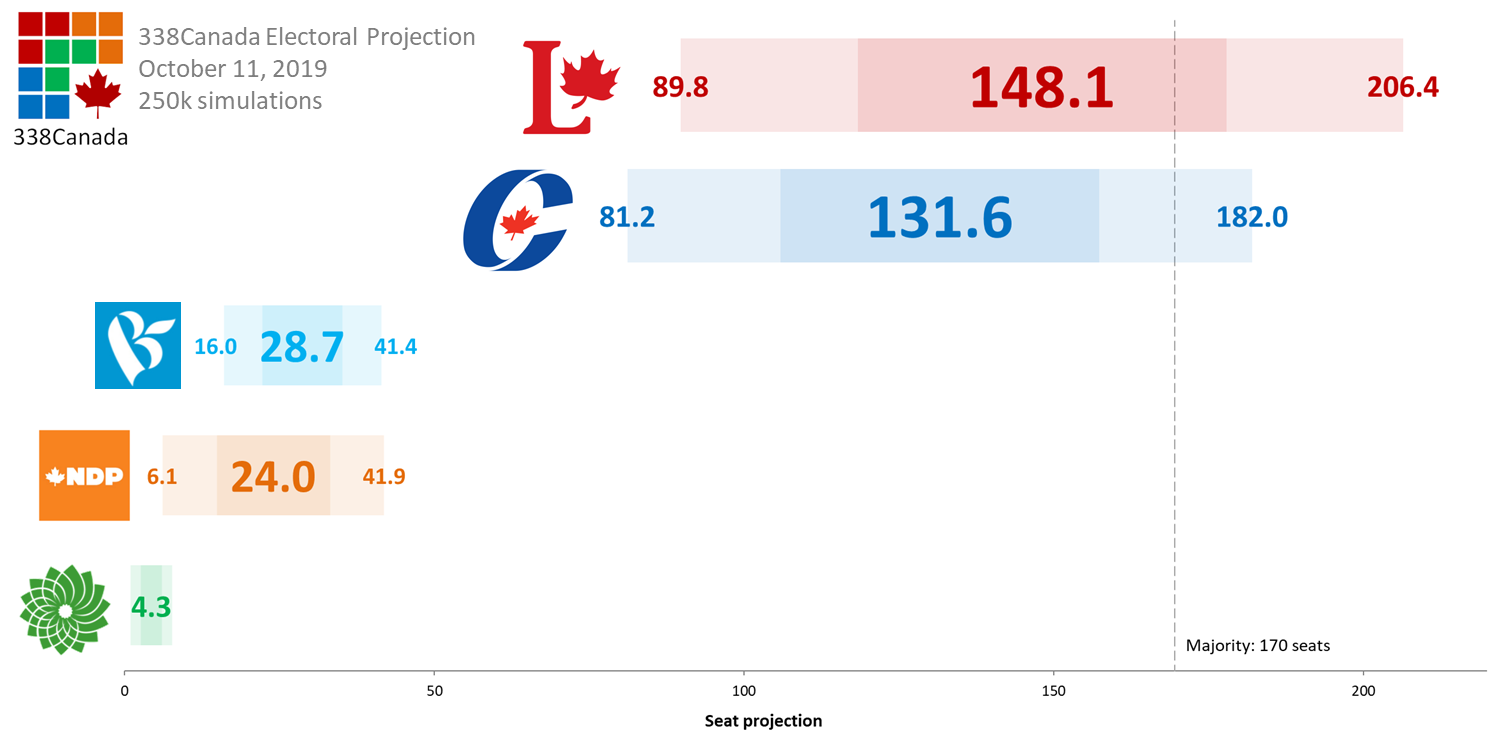 In early September, we were wondering whether the Bloc Québécois could even reach official party status—now the question has become whether it will surpass the Liberals in Quebec.

We should also notice that the NDP’s average has increased to 24 seats, about double what was projected two weeks ago.

As mentioned above, most of the movement in voting intentions so far has been measured in Quebec. Here are the popular vote projections in Quebec since late August: 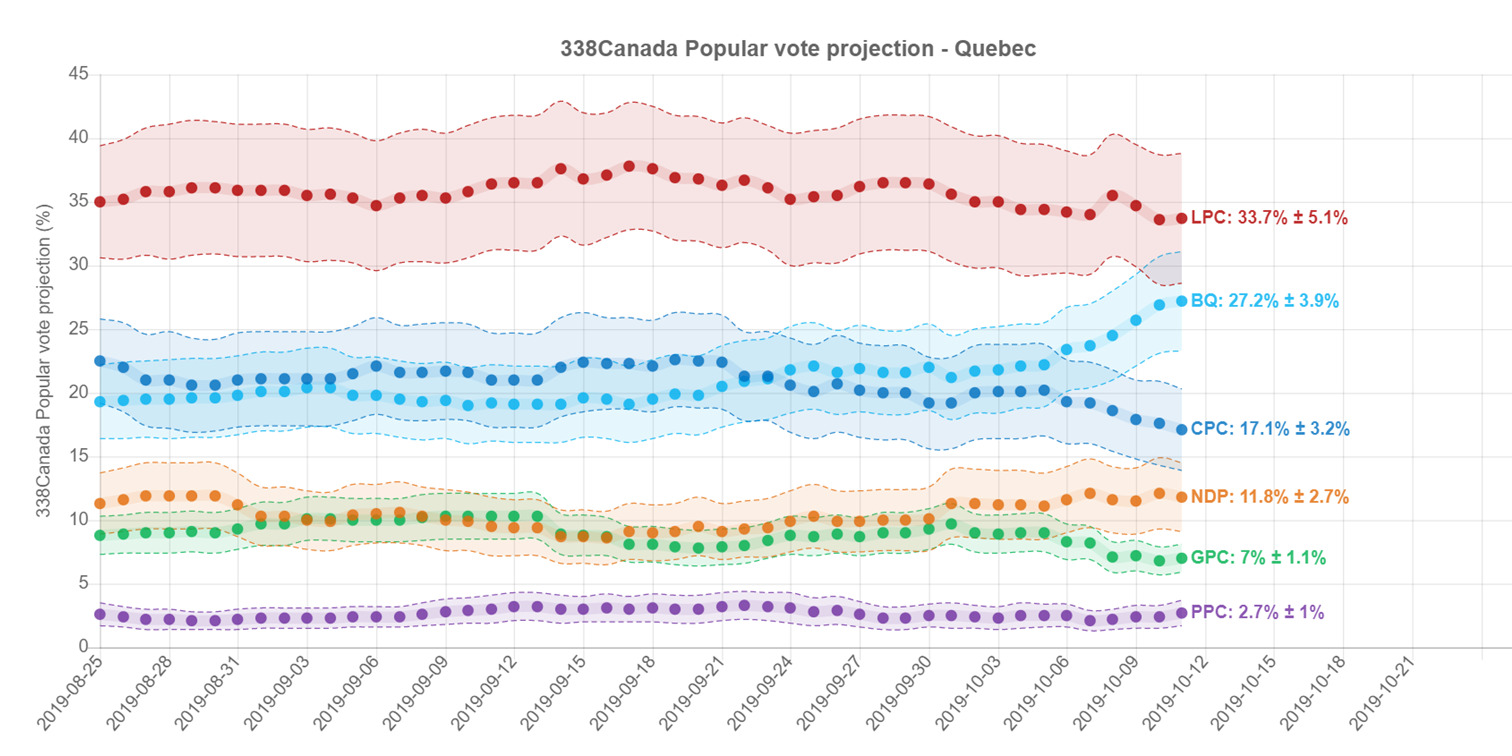 Notice how the Bloc surge on the right coincides with the Conservative slide, which happened right after the TVA debate. Evidently, Scheer’s poor performance that night did not go unnoticed by Quebec voters.

As you can see above, the Bloc has gained close to 10 points (and counting) in the province since the campaign began. This is a major turn of events considering so many of the province’s 78 seats are now in play. Of course, votes have not yet been cast, but we have seen this kind of volatility in Quebec quite often in the past decade (see my recent column about this here).

For sake of comparison, here are the popular vote projections in Ontario, which have remained mostly flat during the same time period: 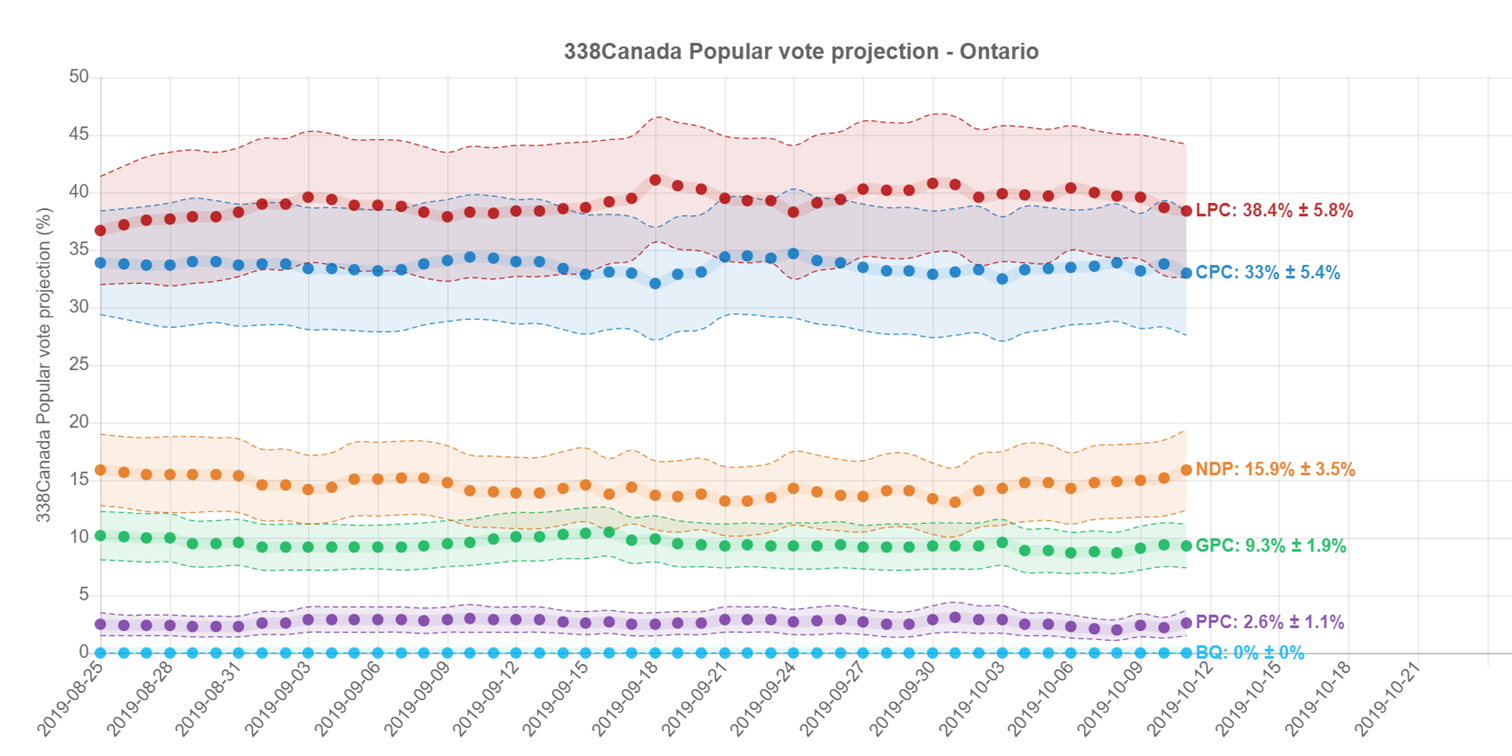 Without a party above the 35 per cent mark, it’s becoming clearer by the day that Canada may be heading towards a fourth minority parliament in this century and, without a formal coalition between parties (which, although not impossible, appears unlikely), the 43rd legislature could potentially be short-lived.

Let’s say, hypothetically, that either the Conservatives or Liberals win the most seats—but with fewer than 140 seats apiece, would a Justin Trudeau-led LPC or an Andrew Scheer-led CPC really be able to win the confidence of the House?

I will let more experienced political analysts speculate on the matter and stick to the numbers. With only 10 days to go in the campaign, we shall soon find out.