The NDP leader on how he plans to pay for his promises, getting women into parliament and turning the Senate into a daycare 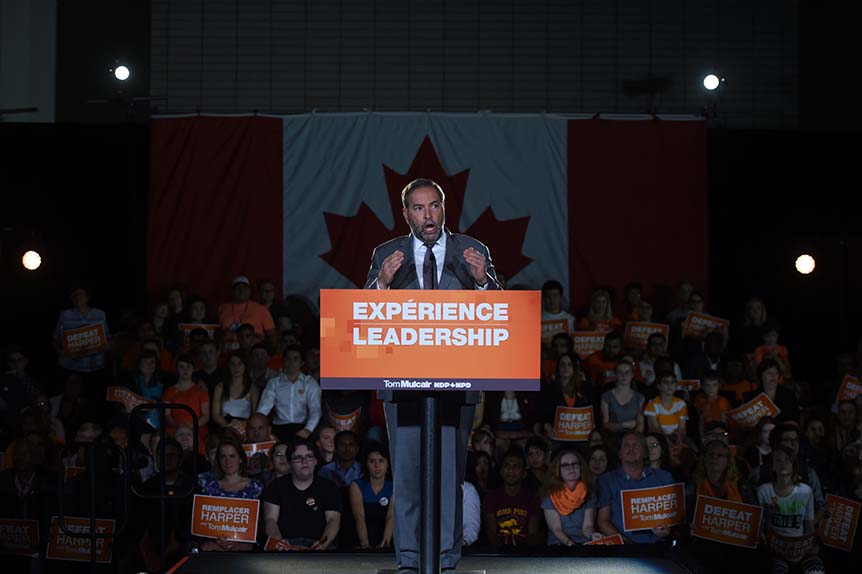 Up for Debate, a panel on gender justice and inequality set to take place on Monday, will not feature all the leaders; Stephen Harper declined to be interviewed for the event’s prerecorded Q&As. But in a series of one-on-one interviews, which first appeared at Chatelaine, Katrina Onstad and Rachel Giese spoke with four federal leaders—Stephen Harper, Thomas Mulcair, Justin Trudeau and Elizabeth May—to discuss women’s issues and beyond. Below, Thomas Mulcair discusses the NDP’s plans to pay for its promises, getting women into parliament and turning the Senate into a daycare centre.

In 2011, under the late Jack Layton’s guidance, a revitalized NDP became the official opposition for the first time in party history. Now led by Thomas Mulcair, the NDP is trying to position itself as a compassionate yet fiscally responsible alternative to the past nine years of Conservative rule. That strategy has put them neck-and-neck with the Liberals and the Tories in the most recent polls. We spoke to Mulcair on September 3.

A national child-care plan has been on the table during campaign seasons for 30 years, yet it always seems to be the first idea to vanish post-election. Why should we believe the NDP’s promise will be any different this time around?

Well, the Liberals were elected four times, and they didn’t create a single space. Even Mr. Harper said he’d create 125,000 child-care spaces, and he went on to create the exact same number as the Liberals: zero. We have a clear priority to process one million quality child-care spaces that will cost, at most, $15 a day. It’s not only good for families and good for women, it’s good for the economy. In Quebec, for every dollar that the system cost, more than a dollar flowed back into government. I know it can be done. There’s a great sentence I recall from Jack: “Don’t let them tell you it can’t be done.”

Yet some blame Jack Layton for dissolving [Paul Martin’s minority] government in 2005 at the moment when the Liberals had funding agreements in place with the provinces and national daycare seemed near realization.

You recently announced a $40-million plan to restore shelter enhancement programs for women and a strategy to end violence against women. Why now?

When you look at the things that Mr. Harper cuts, interestingly enough, they often have to do with public protection. Here we are talking about money that was cut from a program that would help shelters with some of the infrastructure spending that they need to stay open. [In one study] done on a night in 2014, there were hundreds of women and hundreds children who were turned away from shelters. Under an NDP government, that’s not going to happen again. We also have to worry about housing after that, because affordable housing is the next step once you’ve been in a shelter.

The NDP has been accused of being the party of expensive promises. So where will the money come from?

Some people believe that I have to keep everything Mr. Harper’s been doing and then anything new has to be added on with a new source of revenue. But I don’t share Stephen Harper’s priorities. For example, when he has an income-splitting scheme that’s going to cost billions of dollars and will only benefit 15 percent of the population, including some of the Canada’s wealthiest families, I’m going to get rid of that. That’s money that will be available for the things we’re talking about.

Related: How much for that promise in the window? Geddes on NDP plans

You’ve agreed to an immediate federal inquiry into missing and murdered indigenous women. But do you think that Canadians suffer from inquiry fatigue? What other action will the NDP take to address this issue?

I’ve never heard that expression “inquiry fatigue,” but there’s never been a proper inquiry into missing and murdered indigenous women in Canada. There’s an underlying problem of institutional racism there. The population of Ottawa is roughly equivalent to the indigenous population of Canada. If 1,200 women had gone missing or been murdered in Ottawa, do you think we’d have to have the UN pushing us for an inquiry? It would have taken place a long time ago. It’s a reflection of the fact that, despite the theory that in Canada everyone is equal before the law, indigenous women certainly haven’t had their lives taken care of the same way as others in this country. Within 100 days of forming government, we will be launching a full inquiry into missing and murdered indigenous women in Canada.

Related: ‘It Could Have Been Me’: Harrowing stories from resilient Indigenous women

According to the World Economic Forum, Canada ranks a dismal 42nd in the world in terms of the gender gap in politics, with men outnumbering women in parliament three to one.

The NDP has a proud history: Of the eight leaders of our party, three of them have been women. Right now, the NDP has the highest number of women ever elected as part of a caucus in the history of the parliament of Canada. Today, as I’m speaking to you, 43 percent of all our candidates are women, a much higher percentage than any of the other parties.

What tangible effects have you witnessed by having women in positions of power?

Women’s issues are always front and centre when we’re putting together our platform proposals, like affordable child care. That’s also a reflection of the fact that a lot of our young MPs have had babies while in parliament. I have a very concrete plan: There’s a lovely red chamber on Parliament Hill which, once we empty it of the people who inhabit it, will make the most lovely child-care centre in Canada.

The Senate is going to be a daycare centre?

Yes, for the children of the thousands of employees on Parliament Hill and MPs, and it will be a great daycare centre. I’m looking forward to cutting the ribbon.