The minority Liberal government's Speech from the Throne was a vaguer road map than the confident, shiny plan of 2015 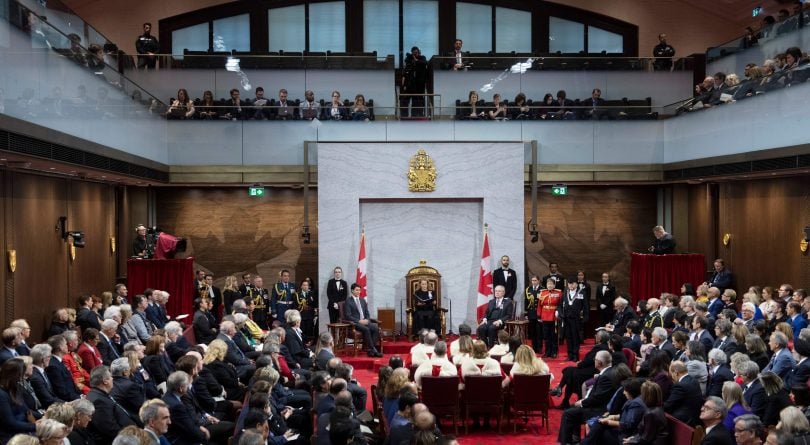 Governor General Julie Payette delivers the Speech from the Throne as Canadian Prime Minister Justin Trudeau (center L) looks on at the Senate in Ottawa on December 5, 2019. (Photo by Sean Kilpatrick / POOL / AFP) (Photo by SEAN KILPATRICK/POOL/AFP via Getty Images)

The previous post-election Speech from the Throne of Justin Trudeau’s government, delivered in 2015, read like an artist’s statement emblazoned on the wall of a museum. There was much soaring rhetoric and philosophical scene-setting, a declaration not only of what was and what mattered, but what could be and what it all meant and who it demonstrated we really were.

“We know the greatness that Canada is capable of, and we know that our success is not only about doing well for ourselves, but also about leaving an even better, more peaceful and prosperous world for our children,” then-Governor General David Johnston read on behalf of the government. “As you consider the important work that lies ahead, remember that Canadians have placed their trust in you. It is now your sacred responsibility to help build that better world.”

The more grounded portions of that speech read like a legislative to-do list lifted straight from an election platform—which is exactly what it was—and that grocery list was both ambitious and extremely specific.

READ MORE: The Throne Speech: More will be done

Thursday’s post-election Throne Speech, on the other hand, was distinctly more restrained, both in what it laid claim to accomplishing in the coming months and years, and in the detail it publicly pinned to those plans.

The most obvious reason for this vaguer road map, of course, is that Trudeau’s party now presides over a fragile minority rather than the robust majority they had in 2015. Every decision about what they can accomplish, how they craft legislation and conduct committee work will now be subject to constant negotiation with a rotating cast of opposition MPs, and not simple majority fiat.

There was near-overt acknowledgement of that reality in the Throne Speech.

“The mandate of this recent election is a starting point, not the final word. The Government is open to new ideas from all Parliamentarians, stakeholders, public servants, and Canadians,” Governor General Julie Payette recited, specifically mentioning universal dental care, in an obvious nod to the NDP’s legislative wish-list. “Whether it’s fighting money laundering or making parental benefits tax-free, there are good ideas across parties, and this Government is ready to learn from you and work with you in the years ahead.”

That statement, notably, may be the most obviously humbled, conciliatory and collaborative one the government has made since Trudeau’s oddly triumphal election night address in Montreal.

The themes around which Thursday’s Throne Speech revolved suggest a similar set of priorities and approaches for the 43rd parliament to those set out for the 42nd: fighting climate change, strengthening the middle class, walking the road of reconciliation and positioning Canada for success in an uncertain world. In 2015, the table of contents was growth for the middle class; open and transparent government; a clean environment and a strong economy; diversity is Canada’s strength; and security and opportunity.

The government’s standard public interpretation of the Oct. 21 election results—which saw the Liberals win 157 seats, the Conservatives 121, the Bloc Quebecois 32, the NDP 24, the Greens three and one independent in the form of Jody Wilson-Raybould—is that it represented a resounding mandate from Canadians for a broadly progressive program.

So not a Liberal majority, but a Liberal-ish approach, surely.

In both cases, the declared first priority was a tax cut, but while the 2015 version would help “the middle class” (whoever that is, because truly no one knows and that is a feature and not a bug), the new Trudeau government “will cut taxes for all but the wealthiest Canadians, giving more money to middle class families and those who need it most.”

The 2015 Throne Speech promised an enhanced Canada Pension Plan and a strengthened Employment Insurance program, the development of a new Health Accord with the provinces, federal leadership to put a price on carbon, new environmental assessment processes, implementation of the recommendations of the Truth and Reconciliation Commission, launching an inquiry into missing and murdered Indigenous women and welcoming 25,000 Syrian refugees within the following few months.

And, in a passage that now sounds like a surreal postcard from another planet—which it effectively is—the 2015 government of Canada would seek to strengthen its relationships with its allies, “especially with our closest friend and partner, the United States.” There is no mention of the U.S. in the latest dispatch from the throne, which is perhaps just as well for a powerful next-door neighbour that a few short years ago was run by the aspirational apparition of Barack Obama and now has the human embodiment of an itchy trigger finger at the helm.

Plenty of ink, however, is devoted in 2019 to outlining how Canada will strengthen multilateral efforts to create a more just and safe world, renew commitments to NATO and United Nations peacekeeping and stick up “for the rules-based international order when that order is put in question, particularly when it comes to matters of trade and digital policy.” No particular reason, you understand, just generally seems like a good idea.

Aside from the negotiated reality of a minority parliament, though, another possible very good reason for a slightly battered and longer-in-the-tooth government to lay out a fuzzier legislative agenda than its sunny self did four years ago is that the 2015 Throne Speech provided an awfully convenient yardstick of unfulfilled promises and notions that aged poorly.

The 2015 section “open and transparent government” alone is enough to cause cold sweats for anyone tasked with defending the government’s record or even the original version of its branded identity.

The government would consult on electoral reform and “ensure that 2015 will be the last federal election conducted under the first-past-the-post voting system,” that Throne Speech confidently declared. The freshly-minted Trudeau government would “reform and strengthen committees” and “not interfere with the work of parliamentary officers,” and nor would it “resort to devices like prorogation and omnibus bills to avoid scrutiny.” Those two consecutive paragraphs alone neatly tick the boxes beside many of the major plot points of the SNC-Lavalin scandal.

On Thursday, before Payette arrived at the meaty part of the Throne Speech that was penned by the government and read out by her, she delivered an amazingly fanciful preamble that had come directly from her own pen. One line, meditating on how “we are inextricably bound to the same space-time continuum and on board the same planetary spaceship” grabbed all the attention online, deservedly, and earned a low rumble of tittering on the Senate floor when she read it out.

But it was another line, almost in the very opening bars of her speech, that provided the most poetic and perhaps inadvertently perfect encapsulation of this moment for this government, and the many, many ways it is different from this same moment almost exactly four years ago.

Payette mused about the first sitting of Parliament in 1867, when Canada was just five months old, and how distant but also how near that moment seems now.

“On the scale of world history, we are still very young. Yet much has happened in the world since then,” she said. “We have matured, and we are here…”

Everyone was so young and shiny then. And now we are here.