Through the Looking-Glass, and What Jack Found There

Yes, yes; ITQ is well aware that Colleague Wherry has gone with the Oz theme, but she prefers her literary allusions to have a Carrollian twist. Check back here at 2:45 or so for full liveblogging coverage of the pre-meeting scrum/photo-op, and then vicariously experience the glamourous life of the Hill journalist by hanging around aimlessly for the next hour or so as we wait for the closing press conference.

And yes, she’ll try to take pictures this time too.

2:33:10 PM
Well, with — just under twenty minutes to go til Jack Layton heads into the hallowed halls of Langevin to meet with destiny and/or the prime minister, ITQ is the only print-or-pixel journalist to join the stakeout so far, but the cameras are out in force. We’re on Wellington, at what I gather is actually the main entrance to the Department of Mysteries, although as far as I know, most of the senior denizens — up to and including the PM — tend to use the Metcalfe exit, since it’s not quite so rife with pedestrians, tourist and otherwise. 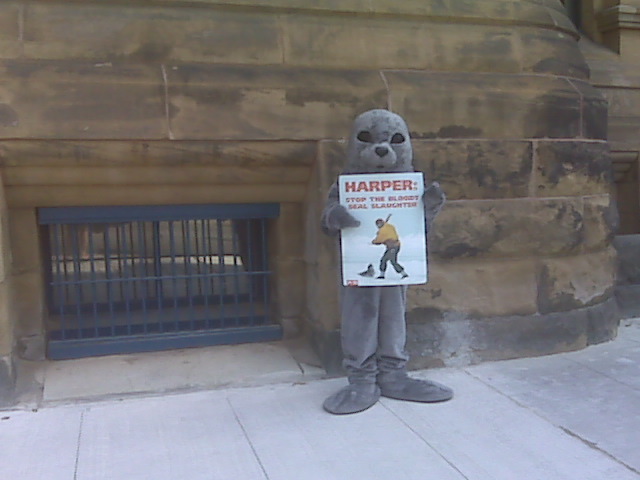 We’ve also been joined by a seal mascot — or, more accurately, an anti-seal mascot in a seal costume — who, with admirable initiative, is picketing the sidewalk in front of the media throng, complete with a sign imploring the PM to “stop the slaughter”. I wonder if protester mascots, like their sporting event cousins, are discouraged from speaking while — be-headed? He’s getting lots of honks, though. Unless those are for us, which I somehow doubt.

2:47:33 PM
Ooh, I wonder if Jack will stop to shake hands — or fins with the seal! You’d have to think that of all the party leaders, he’d be the most likely to secretly oppose — or even be agnostic to — the seal hunt, but for all those Atlantic Canadian seats — actual and aspirational — that he thinks it would cost him.

2:53:03 PM
Apparently, Anne McGrath will be joining Jack for a fourway with the PM and Giorno The Great and Terrible. (Yeah, I finally Baum’d up.)

And there he is! Stopping briefly to accost an unwitting pedestrian and flanked by an entourage of suspiciously Liberal researchy-looking guys carrying signs reading “Jack will do anything for a bigger office” and — damnit, I didn’t get the chance to read the other one, because the whole photo-op lasted approximately ninety seconds, and then he disappeared inside. Now I wish that we’d gotten a heads up on the anti-Jack! protest — we could’ve met them down on Queen Street and trailed along, listening to Jack make forced conversation the whole way.

2:57:36 PM
Okay, now that’s over. What next? Why, we wait to find out what happened inside, of course. Meet me back here in an hour for the presser.

3:23:14 PM
Yes, in case you were wondering, that *was* rather anticlimactic — the Grand Entrance, that is. I have to wonder if the presence of the miscreant crew of concerned Canadians/OLO summer interns might have discouraged any spontaneous chitchat with the assembled media.

And no, I didn’t manage to snap a pic, although I’m hoping *someone* did. That’s the trouble with liveblogging ** berrycamming — not quite enough arms.

Anyway, I’m now sitting outside the National Press Building, soaking up the sunshine (well, actually, the shade, but I’m appreciating the sunshine from a safe distance). I’ll keep you posted on any further shenanigans.

3:40:10 PM
And here comes Jack! No protesters this time — and no cameras either — but a contingent of staffers — and a beaming smile on his face. Hmm. So — the meeting ran for what, half an hour? Max? That seems — disproposing, as far as the possibility of striking some sort of diabolical deal to keep the government intact. I mean, it took Ignatieff three meetings over two *days*, and all he got was a blue ribbon panel.

Anyway, I’m assured that even though Jack is already in the building, the press conference is still scheduled to kick off at 4pm, which means a little more lolling out here on Wellington. What? I’m *monitoring the situation*!

3:55:52 PM
And we’re back! Well, actually, we’re now in the NPT, where the air cool and the tension palpable. Okay, that’s a bit of an exaggeration — there’s not much of a sense of anticipation, since everyone knows that Jack is going to take one of two tacks: he’s going to Make Parliament Work For Ordinary Kitchen-Table-Sitting Canadians, or this government is one up with which he will not put.

3:59:28 PM
And it’s showtime. Ooh, nice purple tie on Jack Layton. Okay, here we go — first, with the retroactive summer well-wishings, and then onto business.

He met with the PM today — yes, we know — and … Okay, it’s Making Parliament Work. Collect your winnings, bettors.

4:00:52 PM
The treatment of Canadians abroad — is it the new hot issue? Sounds like it is for Jack; he brought it up at his meeting, and asked the PM to make sure these sorts of unfortunate incidents don’t happen again. Also on the conversation list: EI — on which the two had “a genuine debate” — and job creation.

4:03:30 PM
Huh, in English — the opening bit was in French, which I probably should have mentioned — it was a *lively* debate, although that could be a translation issue. Otherwise, pretty much the same statement in both official languages.

4:04:21 PM
Questions! First up, Yves Malo, who wonders what he has to say about the Khadr situation; not surprisingly, he’s not impressed with the government’s decision to appeal the court ruling. Human rights are important, and there is no such thing as conditional citizenship.

As for his meeting with the PM, there was “no indication” that he plans to change his direction on the economy — or even that he understands “the scope of the situation”. Interesting — I wonder if he isn’t inadvertently playing into the Liberals’ hands by making EI his issue.

4:06:06 PM
Second question — the fabulous now-on-twitter Gloria Galloway — GlorGal — who wonders whether the PM reminded Jack about the huge honking deficit that has built up over the last year, and Jack disputes the notion that Canada is, in fact, coming out of the recession. Apparently, the two also had a little bit of a tussle over the infrastructure money, and whether it’s really making it down the pipes to the municipalities. That, Jack suggests, is what’s driving the unemployment rates up.

Next question — what about the Jack Tax Break that he was so pumped about during the convention? Some party members, she avers, are adamantly against the policy. What about caucus? He doesn’t quite answer the question, but re-touts the resolution that never made it to the floor, and hints that it will be debated in future. I see an opposition day motion!

4:09:15 PM
Helene Buzzetti wonders whether he demanded any concessions in exchange for NDP support on future confidence motions, and the answer, it seems, is no. He does get in a shot at the “rhetoric” from the Liberals, though.

As for the EI reform package, it seems to *him* that the Liberals and the Conservatives have accomplished pretty much nothing as far as the panel — the PM didn’t tell him that any progress had been made, at least — and the NDP already has a bill in the House that would address his concerns.

4:12:30 PM
Juliet O’Neil cuts to the chase: will the NDP vote in favour of a Liberal-introduced non-confidence motion? He won’t come right out and say yes — or no — but notes that his party would be the “least likely” to support this government, given his deep discontent with its direction.

Emmanuel Latraverse presses him on the issue — will he or won’t he? Layton plays coy, and throws it back in the lap of the Liberals, who — as he reminds us, not that we needed reminding — have frequently threatened to bring down the government, only to back away at the last second. Emmanuel wonders if there are any “potential compromises” he can see making with the prime minister, and Jack points to the government’s support for his party’s motion on senior citizens, but immediately adds that since then, they’ve done nothing to live up to it.

4:16:58 PM
BTW, it seems that Jack wants to Make Parliament Work for Canadians. Did I mention that?

He also has a good line on the Conservatives’ proposed EI reforms, which, as far as he can tell, would ‘increase the font size’ so unemployed workers would be more able to see how ineligible they are.

Elizabeth Thompson is gently grilling Layton on whether the PM showed any interest in finding a compromise with the NDP, and Jack finally comes right out and says no, he didn’t.

4:21:41 PM
SunMedia’s Althia Raj wants to know more about the feel at this meeting, as compared to last year: Apparently, it was similar in tone — and the last one ended with an election.

Oh, and it turns out that this meeting was arranged after a brief but poignant interleader encounter at the Calgary Stampede

4:23:37 PM
CP’s Joan Bryden wants to get back to that theoretical confidence vote, and I don’t think she’s going to appreciate Jack’s determined ambiguity on the issue. Unfortunately, that’s all we’re going to get on this one — the NDP will “assess the situation” if a motion does, indeed, come forward from the Liberals, which is an eventuality that he seems to think — or wants us to think he thinks — is remote at best.

What would it take to get him to support the government? A “fundamental change in direction” — particularly EI/job creation, seniors and credit card interest rates. He doesn’t seem terribly optimistic that there’s much chance of that happening — the prime minister “seems to be in denial” on the results of his stimulus package.

4:27:46 PM
An oddly internally conflicted minisoliloque from Layton, in which he suggests that, despite the lack of visible agreement from the prime minister, he may have started something that will eventually lead to action — just like when he told the same PM to make the residential schools apology “a priority”, which he eventually did, albeit ten months later — but then describes his current outlook as “not hopeful”. It’s as opaque a place as any to wrap up, and he does, leaving none of us any more the wiser as to what the future holds.

And with that, ITQ is signing off for the day. See y’all at Foreign Affairs tomorrow afternoon — if not before, that is.

UPDATE: The Globe has a picture of  Jack’s protester parade here.