Thursday in Beijing. The Prime Minister had pooled events for the first half of the day, so most reporters had a break from work. A few of us took a suggestion from Canadian embassy staff and made our way to 798 Art District,  a maze of contemporary art galleries, cafés and design stores in a mid-20th-century industrial neighbourhood on the way out to Beijing Airport. In the way it’s repurposed factory space to creative ends, it’s a little like the Distillery District in Toronto or the Exchange District in Winnipeg, except far larger and more elaborate.

We only had an hour and a half to poke around. I could have spent a week. I’ve posted a few photos below. Many of these photos come from the Ullens Centre for Contemporary Art, a great big gallery-exhibition space opened in 2007 by a Belgian couple. It’s obviously a Big Deal. The Canadian embassy showed Edward Burtynsky photos there not long ago; here’s a photo page showing the day Frank Gehry came to visit; the exhibit by video artist and sculptor Zhan Wang, which is hard to describe but haunting, was sponsored by Louis Vitton.

One piece at UCCA — I’m sorry I didn’t note the artist’s name — makes prominent use of excerpts from Byron’s poem The Age of Bronze:

Great things have been, and are, and greater still

Want little of mere mortals but their will:

A wider space, a greener field, is given

To those who play their “tricks before high heaven.”

Ai Weiwei, one of the most prominent Chinese dissidents, clearly has a close relationship with UCCA. An interview with him appears in a book I bought there by the gallery’s director, and his photo appears on the website.

Everything about this whole neighbourhood — the art, the mix of cultures, the relaxed relationship with the political censors, the way the display spaces roost in the skeleton of a mid-century worker’s nightmare — hints at the future China that, if everyone concerned is very lucky indeed, may not be too far distant. The world is enthralled and a little unnerved at the sight of tens of millions of Chinese following orders. Imagine each of them following their heart. 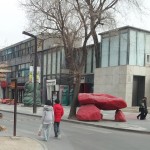 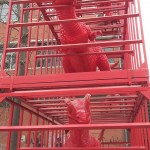 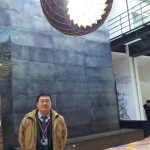 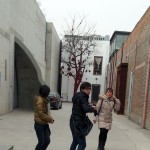 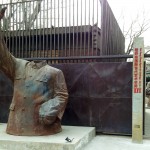 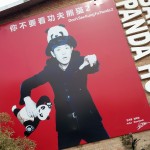 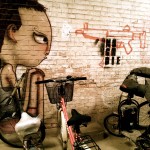