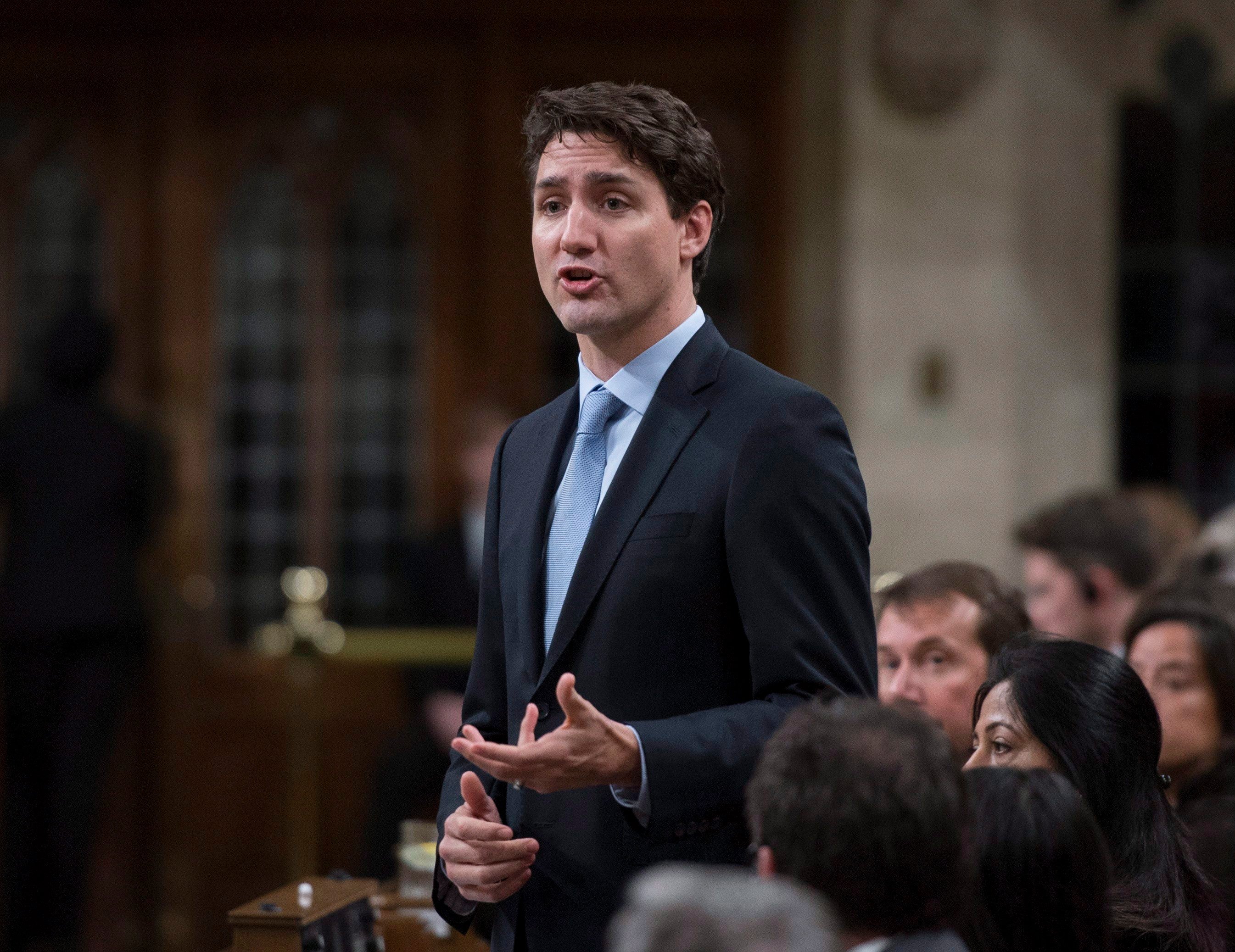 Prime Minister Justin Trudeau responds to a question on the situation in Syria during question period in the House of Commons on Parliament Hill in Ottawa on Friday, April 7, 2017. THE CANADIAN PRESS/Justin Tang

OTTAWA – Prime Minister Justin Trudeau smoked marijuana as an MP but he has not suffered the same consequences as Canadians who are slapped with simple pot charges, NDP Leader Tom Mulcair said Tuesday —an example, he says, of “abject hypocrisy.”

Mulcair took aim at Trudeau for his assertion that he wants to make things fairer for those facing pot-possession charges once marijuana becomes legal — a comment he made during a segment with Vice Canada on Monday.

The NDP has repeatedly called for an amnesty on charges for possessing small amounts of pot, but nothing has been done.

Trudeau doesn’t seem to care about Canadians who face charges, even though a plan is in place to revoke the prohibition, Mulcair said during a news conference.

“When you’re of that background and you’re privileged and you’ve always had everything given to you and you are treated differently, that’s what he is used to, isn’t it?” he said.

“He doesn’t find it at all abnormal that he can admit to smoking marijuana while he was a member of Parliament and at the same time say, ‘The law is the law and you will be prosecuted if you smoke marijuana.’

“That is abject hypocrisy by Justin Trudeau.”

Trudeau also shared a story during the Monday interview about an incident in which his late brother Michel faced marijuana possession charges.

Trudeau said his father, former prime minister Pierre Trudeau, was able to bring the family’s resources to bear on the problem, including turning to friends in the legal community to help make the charges go away.

He also conceded that other Canadians, including marginalized people, are treated unfairly in the legal system despite the fact “Canada is supposed to be fair for everybody.”

The Prime Minister’s Office said Trudeau is exploring ways to address the issue, but did not delve into specifics on Tuesday.

Earlier this month, Public Safety Minister Ralph Goodale told The Canadian Press that blanket pardons for those with pot convictions is not “on the agenda at the moment.”

Governments have not historically issued generic pardons when there has been a change in the law, Osgoode Hall law professor Alan Young said Tuesday — a lawyer who has advocated for Canada to change its legal approach to pot for more than 25 years.

“They’ve also never confronted a situation where they’ve changed the law and it has affected hundreds of thousands of people and young people who have criminal records,” Young said in an interview.

“It does make sense, ethically and morally, to look at the pardon power to correct the mistake, but being somewhat unprecedented, until it is actually proposed, I don’t believe it.”

Trudeau could move quickly to decriminalize marijuana but refuses to do so, Mulcair said Tuesday.

“Mr. Trudeau’s lame answer is ‘Oh, it is because organized crime would somehow be selling marijuana,'” Mulcair said.

“This just in: that’s the case now. That was the case when Mr. Trudeau admitted he was smoking marijuana and that’s going to be the case until the new system is in place, but that’s not a reason to prosecute young people for smoking marijuana.”

“It still requires a person attending court and going through the steps of having it prosecuted,” she said.

Marijuana is also frequently banned in bail and probation conditions, she said, noting this keeps people entangled in the court system.

“It comes back to people who are racialized or otherwise disadvantaged, who are at a higher risk of being charged with these types of offences,” she said.

Daniel Bear, a professor in the criminal justice program at Humber College, said Tuesday that arrests or criminal convictions can have devastating impacts, especially among young Canadians, who have one of the highest rates of cannabis use in the world.

“With a conviction, you’re looking at issues of being able to work with vulnerable populations — that’s not just individuals who want to become police officers,” he said.

It is not in the long-term national interest if a pathway is not provided toward pardons, Bear added.