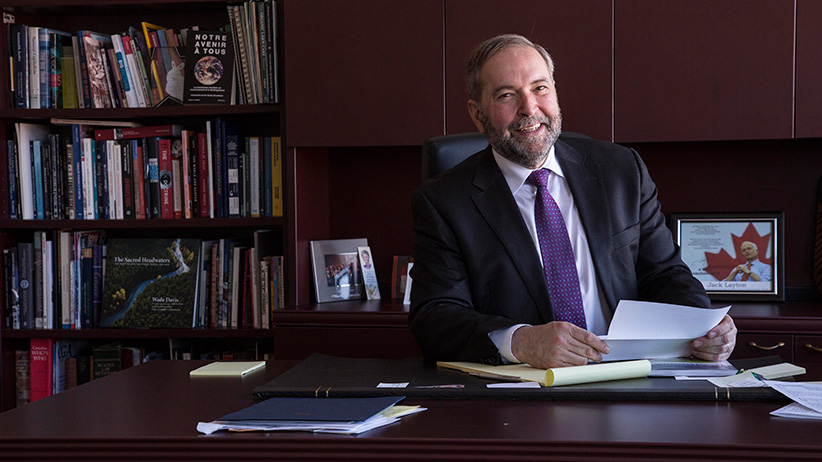 Tom Mulcair has always presented himself as fighter, and he’s facing a tough scrap now—over his future as NDP leader. About 1,500 party delegates are set to gather in Edmonton April 8-10 for a convention that’s officially about policy, but really all focused on a vote about whether to launch a leadership race or stick with Mulcair. In an interview at his Montreal office this week he discussed that test, but also spoke about what it’s like to square off against Justin Trudeau, rather than Stephen Harper, and about the mood of the political left in the moment of Bernie Sanders.

Q: Leading up to the vote on your leadership at your party’s convention in Edmonton, there’s been some confusion about what number you need to keep your job. The NDP’s constitution says you require only a bare majority, but the benchmark of 70 per cent has been mentioned a lot. What’s your view?

A: I think that 70 per cent is what I’ve been hearing across the country. I’m not taking anything for granted, but I am heartened by the level of support I’ve been seeing. I’m going to continue to work tirelessly right up until the vote to get the highest level of support possible.

Q: There’s also going to be a session at the convention to hash out what went wrong for the NDP in last year’s election. What aspects of the campaign are you hoping delegates focus on?

A: I’m not going to try to pre-empt what the members talk about. The purpose is to have an open, honest discussion and I’ll let people take that in the direction they want. I’m hoping to have a nice, full discussion. At the end of the day, if we want to win—and that’s the big change for the NDP, we’re a party that seeks to form a government—we’ve got to have the structure and the wherewithal to do it.

Q: You ran on a balanced-budgets platform and Justin Trudeau campaigned vowing to run deficits. Do you think the NDP could have gotten away with saying the federal government needed to run deficits, or would you have been pilloried as fiscally irresponsible? Is that a brand vulnerability for a social democratic party?

A: Well, actually, in 2009 at the NDP convention in Halifax, we sat down and hatched a policy for ourselves that we would, except in extreme circumstances, run a balanced budget. We’re a party that always uses universal social programs as the best way of reducing inequality in society. We don’t want to go through the cycle of spending and austerity. We’ve always understood that good management is a precondition for being able to offer stable, long-term, universal social programs.

Q: But Rebecca Blaikie, your party president, found in her review of the campaign that Trudeau’s willingness to run deficits was taken by a lot of progressive voters as a sign that Liberals were the party of change.

From Evan Solomon: What people often forget about political leaders like Tom Mulcair

Q: How much harder is it to be opposing Justin Trudeau than it was to square off against Stephen Harper?

A: Essentially, the whole Conservative project was the target. It was a mindset. It was narrow-minded, it was mean-spirited. It was anti-labour, overtly. So it was a full-force, full-bore fight between progressive values writ large and a government that represented the antithesis of those values.

How does it differ with Mr. Trudeau? When he talks about First Nations issues, for instance, I’m the first to applaud him, when he puts money on the table. But we’re going to be able to talk more about the substance of these files than we could with Mr. Harper.

When Mr. Trudeau campaigned, he talked a lot about the importance of health care. How could he not? When we got his budget, the $3 billion he had promised for home care was not there. Employment Insurance—there are 850,000 people ineligible out of the 1.4 million unemployed. They tweaked it a bit, a few percentage points, so it’ll be down to 800,000. But they didn’t promise to tweak it, they promised to fix it.

There are other issues, like climate change. I was there [at last fall’s UN climate summit] in Paris. I saw the emoting, and I felt a strong change of tone, and I congratulated that. Now let’s look at the details. Is Canada going to reduce greenhouse gas emissions? No. We’re not.

A: We’re not. There’s no plan to do it. The only plan that they’ve got is Stephen Harper’s plan, and even those weak targets they will not meet. They know that.

Q: You’re talking policy, but there’s also Trudeau’s ability to project an image of optimism and an upbeat spirit. How do you possibly fight that?

A: You don’t. I want a positive approach to climate change. I like having a Prime Minister who says climate change is a real challenge that we have to come to grips with. Now let’s get down to cases. Are you doing anything about it? Does that make it tougher? Sure it does. But these things are not decided in days or weeks. They’re decided in years.

Q: You mentioned that the NDP’s mission is to win, but I wonder if that’s entirely true. Aren’t there some in your party who’d be happier shifting left and not worrying about getting elected? They’re fired up by news of Bernie Sanders in the U.S., or Jeremy Corbyn in Britain, or the Leap Manifesto here in Canada.

A: I’m aware that there are some people who feel more comfortable in a position where they’ll take an ideological approach, and that will make them feel more reassured than any hope of actually being able to take that into government. I’m always going to take the approach that if we’re serious about wanting to do the big things, like fight inequality in our society, like come to grips with climate change, like bring in real democratic reform, that you have to form a government to do that.

Q: You have a reputation for being effective in the House, but maybe not the sort of guy who electrifies groups of the party faithful gathered in a church basement.

Q: That’s fair. I haven’t been following you around since the election.

A: Over the last four months I have gone into dozens and dozens of those halls across the country. And you know what? People were demoralized after the election. But we’re not letting them become demobilized.

Q: It must be especially hard in Ontario, where you lost so many seats. You were wiped out in Toronto. Did something particular go wrong there?

Q: Some commentators have said that one thing going against you, as your party decides if you should stay on as leader, is your age. I’m not sure it’s fair. I mean, you don’t seem to be flagging physically—

A: No. I’ll invite you if, you want, to come and swim a few kilometres with me every day.

Q: Let’s avoid that. Your age does come up, although maybe that’s a bit odd, given the prominence lately of senior citizens on the left, like Sanders and Corbyn. I’ve forgotten how old you are—

A: Honestly? I think I’ve heard it once, and it was very oblique. And by the way, if you look at the demographics of the Baby Boom, I’ve got a lot of people my age in Canada.

Q: You have a political track record as a fighter. But is it different when you face having to fight elements in your own party who want you to move on?

A: I mean, come on. This is us, right? It’s a party. It’s not a cult. So you’ve asked the right questions about being a movement as opposed to saying, “Well, we can actually form a government.” I think that a movement that inspires a political party can form a government. I don’t think it’s exclusive.