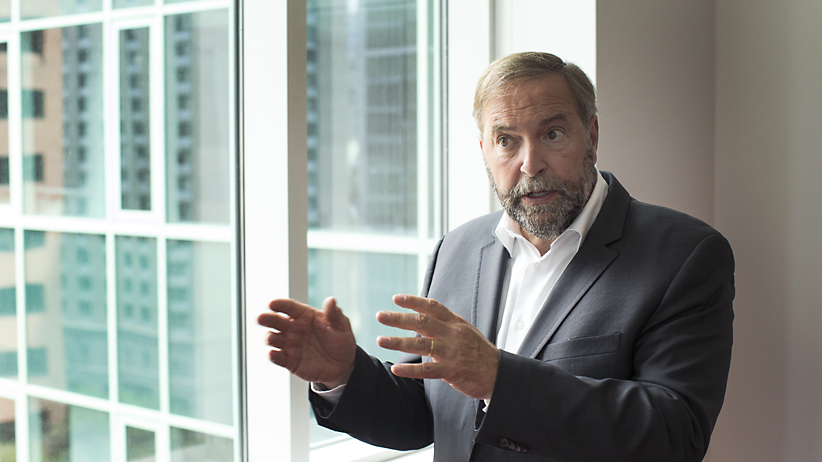 OTTAWA – Tom Mulcair predicts the next federal election will be an historic first: a three-way battle for power among Conservatives, New Democrats and Liberals.

Despite opinion polls which suggest the NDP has been eclipsed by Justin Trudeau’s ascendant Liberals, Mulcair is confident his party will be back in the hunt once a campaign actually gets under way in the fall of 2015.

“We’re heading into, at the start of the campaign, the first three-way race in Canadian history,” the NDP leader said in an interview as he prepared for a three-day caucus retreat beginning Tuesday in Edmonton to plot strategy for what is expected to be a full year of non-stop campaigning.

For the time being, Mulcair acknowledged he can’t compete with the rock star power of the youthful, telegenic Trudeau, who has topped Canada’s political charts since taking the helm of the third-party Liberals 18 months ago, relegating New Democrats to their more traditional role as also-rans.

He chuckled over a recent editorial cartoon in The Globe and Mail, which showed a fuming Mulcair, laden with charts and graphs, standing alone at a microphone while reporters swarmed to Trudeau, who had merely coughed.

More on macleans.ca from Paul Wells:

“We have to fight for every column inch (of media coverage),” he said.

But all that will change once an election campaign is actually underway, he predicted.

Mulcair expects the NDP will still have to push hard during the campaign to be taken seriously by the media as a contender for power. But it’s a challenge he appears to relish.

“Nobody’s ever given me anything in my life. I put myself through school and I come from a family of 10 kids and I’ve worked hard literally all my life,” he said.

“For me, hard work isn’t a slogan written by somebody else,” he added, in a dig at Trudeau’s “hope and hard work” mantra.

An experienced campaigner and nimble verbal jouster, Mulcair clearly believes he can out-perform the neophyte Trudeau on the hustings and in the crucial televised leaders’ debates.

“I love campaigning. Frankly, I’m a very strong campaigner, I don’t give up and I go morning, noon and night,” he said.

Liberal strategists calculate that Mulcair’s love of a good political brawl will strike Canadians as too much like Harper, actually helping Trudeau stand out as a different, sunnier, more appealing, more hopeful kind of political leader.

But Mulcair argues he won’t be fighting against anyone, but for the NDP’s positive agenda.

In the meantime, Mulcair professes satisfaction with the NDP’s current third-place showing in the polls, most of which show the party hovering in the low to mid-20s, behind the Conservatives at about 30 per cent and the Liberals approaching 40 per cent.

The NDP is actually in a better position now than it was at the start of the 2011 campaign, when the party vaulted past the Liberals into official Opposition status for the first time in history, he said. It’s starting with almost three times as many incumbent MPs as the Liberals, and going up against a government that Mulcair contends has worn out its welcome.

“I know that a year from now, Canadians are going to be looking for one thing: the team that can actually replace Stephen Harper. Canadians want change, I’m convinced of that,” Mulcair said.

“And the only team that has the ability to replace them is the NDP. Don’t forget, we not only won 103 seats in the last election but we finished second to the Conservatives in 107 seats.”

Moreover, the party is still “extremely strong” in Quebec, which delivered 59 of its 75 seats to the NDP in 2011. He boldly predicted the NDP “is not only going to hang on to the seats we have, we’re going to go get some more” in the province.

And Mulcair noted that he personally scores well in leadership polls, only slightly behind Trudeau.

Still, he allowed that one of the NDP’s biggest challenges will be overcoming Canadians’ traditional tendency to alternate between Conservative and Liberal governments.

“We’re in a great position, for the first time in our history, to form a government. But part of that work is overcoming the atavism, the feeling among the voting population that, well, when you get tired of Brian Mulroney, you can always go back to the Liberals of Jean Chretien,” he said.