In first interview after leading the NDP to a return to third-place status, Mulcair discusses his conviction and his consolation 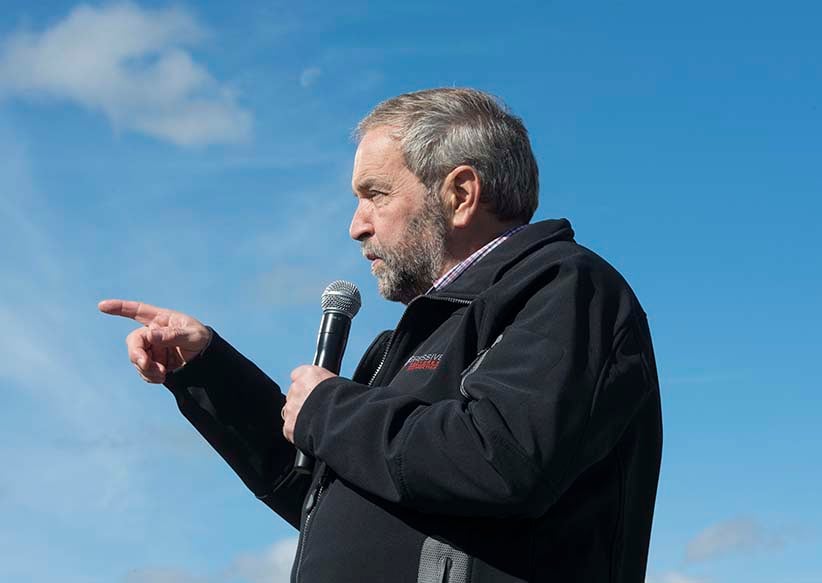 OTTAWA – NDP Leader Tom Mulcair says he believes he did the right thing to stand up to Stephen Harper on the niqab — even though his position may well have cost his party some crucial support.

In his first post-election interview with The Canadian Press, Mulcair says maintaining a principled approach on the issue was one of the defining moments of his political career.

The issue of face coverings became a thorny issue during the campaign, with some suggesting it seriously hurt the party’s stronghold in Quebec, after Harper insisted on a ban on the garments at citizenship ceremonies.

From the archives: Mulcair took a bold stand on the niqab. It may ruin him.

Mulcair said he continues to think he did the “right thing to stand up to Mr. Harper on those issues.”

“I would quote back to him his MPs that were being very divisive, talking about brown people or talking about Muslim women who should get the hell back to where they came from,” Mulcair said. “I wasn’t going to be part of that. I just found it undignified.”

Mulcair said he thought it was wrong to divide Canadians on issues of race and religion.

“These were defining moments for me in my political career and in the campaign,” Mulcair said. “And could a different result have been achieved? Perhaps. But I wasn’t going to do something that I had never done in my career.

“I’d always been a person who stood up for his convictions.”

Mulcair said his team was aware the niqab debate was a “very emotional issue” that created waves in the campaign.

“That’s something that was measured by us,” he said. “We knew that there was a very strong reaction. I was able to understand but I couldn’t agree…

“I was also obliged to say that we live in a society where rights are not a popularity contest and the rights, when they’re set down by the courts, have to be respected. It is no longer a question of what people like or don’t like.”

Related: Inside the orange crash

“I have such great admiration and strong affection for every single person who had been involved in our caucus and I want to make sure we keep them close,” he said.

The NDP caucus is now made up of 44 MPs, including 16 new members. That’s down from 95 in the previous Parliament, with high-profile MPs such as Paul Dewar, Megan Leslie, Peggy Nash and Peter Stoffer losing their seats to Liberals.

The NDP leader gave no indication that he has considered stepping down.

Rather, Mulcair said his party continues to have much to offer, especially as the Liberal government prepares for an upcoming climate change conference in Paris and plans to move forward on issues such as electoral reform.

“Both Mr. Trudeau and I have said that this one, the 2015 election, should be the last one under the old first-past-the-post system,” Mulcair said. “We should follow through on that. I also think that proportional representation is the only real way to achieve that type of change.

“So, I’m looking forward to having that discussion with him to see whether he wants to follow through. He’s going to get our full collaboration.”

Mulcair also says his main consolation — in an election which saw his party lose its status as official opposition and fall back to third place — is that the NDP helped take down Harper after nine years in power.

Mulcair says he attributes a lot of that success to the work the NDP did in opposition.

“We were able to take him regularly and show his ethical shortcomings and during the campaign, we were very tough on him,” he said. “I think, at least we can say for that part of it, I think that was mission accomplished … it was the key condition that I had set down and we got that job done. He’s no longer there.”

Mulcair said there was a strong desire for change among the Canadian public and he is optimistic about the role of the opposition going forward.

“We’re just going to make sure that the positive change that we’ve always talked about, when we do have things in common, that it is there,” he said.

“And when the government has different points of views from us … that the public is given full information so they can know what they’re dealing with.”