NDP leader said he takes 'responsibility for lack of clarity' 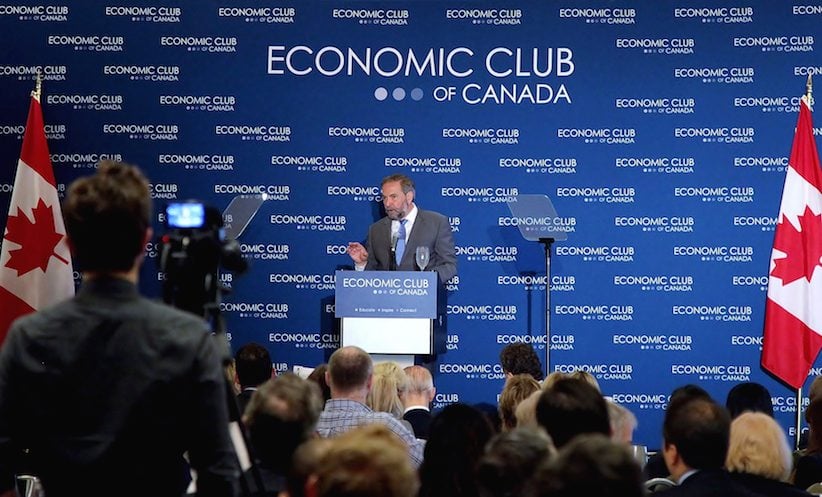 NDP Leader Tom Mulcair speaks to the Economic Club of Toronto on Tuesday, June 16, 2015. In his visit to Toronto, the NDP leader emphasized the record New Democrat governments have when it comes to balanced budgets. THE CANADIAN PRESS/Colin Perkel

OTTAWA — Tom Mulcair is having a little trouble with numbers even as he attempts to reassure the business community that New Democrats would be prudent guardians of the public purse.

The NDP leader told a Bay Street audience Tuesday that his child care plan “over the next 10 years will deliver one million, $15-a-day child care spaces across Canada.”

In fact, the NDP plan is to be rolled out over eight years.

An aide said the 10-year reference was a “speech-writer error.”

At an election-style partisan rally Wednesday evening, however, Mulcair boasted about his child care plan without attaching any time frame at all to it.

Earlier Wednesday, Mulcair told CBC Radio’s “The Current” that the existing corporate tax rate is “about 12, 13 (per cent), something like that right now.”

In fact, the corporate tax rate, which Mulcair has vowed to raise by an unspecified amount to pay for promises like his child care plan, is 15 per cent.

The combined U.S. rate is 39 per cent, almost 13 percentage points higher than Canada’s combined rate of 26.3 per cent.

Mulcair said he takes “responsibility for my lack of clarity” but then went on to muddy the corporate tax waters once again.

“We’ve always said one thing,” he said outside the NDP’s weekly caucus meeting. “We want to make sure that the Canadian tax rate for our large corporations remains below the U.S. combined rate and we’re going to continue to work on that.”

He added: “It’ll be done incrementally. We’ll stay below the U.S. average.”

But, in fact, Mulcair has not always said that one thing.

Last September, Mulcair told Maclean’s that Canada’s corporate tax rate has “dropped way below the OECD average, way below what the Americans are paying.”

He said an NDP government would keep corporate taxes below the American rate and “we’ll also wind up below the OECD average. But we’re so far below both right now it doesn’t make any sense.”

In fact, Canada’s tax rate is already slightly above the average 26 per cent imposed by the 34 countries that belong to the Organization for Economic Co-operation and Development.

Since that interview, Mulcair hasn’t mentioned the OECD and has talked instead about bringing Canada’s corporate tax rate more in line with the average of G7 industrialized countries.

“We’re way below the G7 average so those are our main trading partners, countries with economies similar to ours,” he told CTV’s “Canada AM” in January.

The average corporate tax rate for G7 countries is 29.9 per cent, 3.6 percentage points higher than Canada’s.

During his radio interview Wednesday, Mulcair said an NDP government would hike federal corporate taxes to “something in the 18 to 19 (per cent) range” — a three-to-four-point increase he said would bring Canada in line with the G7 average.

But a few hours later outside his party’s caucus meeting, he didn’t mention the G7 at all and talked only about staying below the U.S. rate, which is the highest among all the OECD and G7 countries.

Which tax bar Mulcair really intends to limbo under makes a huge difference, since he’s relying on the promised corporate tax hike to rake in much of the revenue he’ll need to pay for child care and other pricey promises.

Erin Weir, a labour economist running for the NDP in Saskatchewan, has estimated that each percentage point increase in the corporate tax rate would generate about $1.5 billion in revenue each year.

However, other economists have warned that the move wouldn’t bring in as much money as the NDP thinks because corporations would simply shift income to other countries to avoid paying the extra taxes here.

In the Commons, Prime Minister Stephen Harper needled Mulcair about his apparent confusion about corporate taxes.

“When asked, ‘What is the tax rate exactly?’, he did not know and stated it was three points lower than it actually is,” Harper said in a raucous question period that featured repeated pointed jabs at Mulcair, the current darling of public opinion polls.

“That is typical of the NDP. It does not know what the taxes are; it just knows everybody’s taxes have to be higher.”

The jabs and closer scrutiny of all his remarks is the price Mulcair is now paying for the NDP’s recent front-runner status in the polls four months out from an election. At the evening rally, however, a clearly buoyant Mulcair and a pumped crowd of some 1,000 party faithful, weren’t dwelling on the downside of momentum.

That change, he added, “is just an election away.”