Tom Mulcair: The 2016 Parliamentarian of the Year

After a tough election loss and a tougher party convention, Tom Mulcair got right back to work in the House of Commons 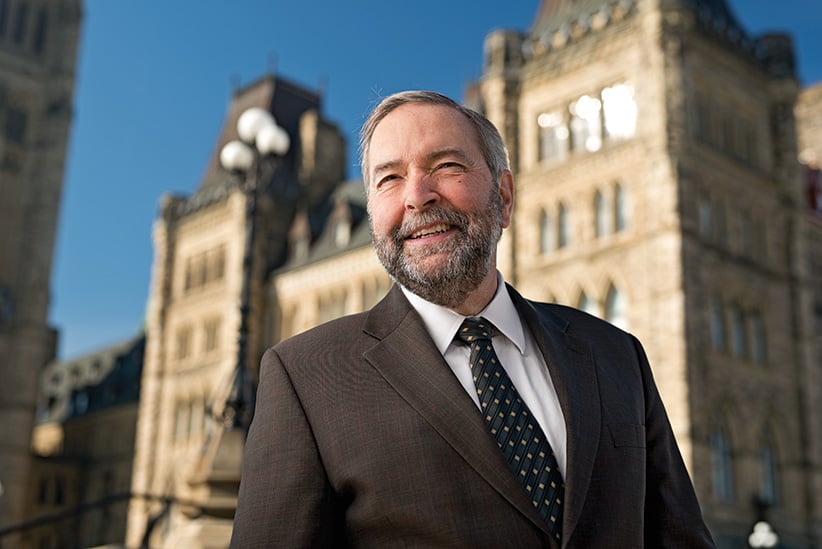 On Nov. 15, Maclean’s celebrated the best of Ottawa with the ninth edition of our Parliamentarians of the Year awards, which were handed out based on the results of a secret-ballot survey of their peers in the House of Commons. NDP Leader Tom Mulcair won the top honour for 2016. View the full list of award winners.

It would be hard to overstate how bruising last spring was for Tom Mulcair. After leading the NDP to a deeply disappointing third-place finish in the 2015 federal election, he faced a vote on his leadership at the party’s April convention in Edmonton. Mulcair campaigned hard to keep his job, but convention delegates rejected him anyway. This proud, combative career politician would be relegated to serving as interim leader until his successor is chosen in the fall of 2017.

On his first day back in the House of Commons, just two days after the vote in Edmonton, Mulcair rose in question period. Before he could begin to speak, MPs in his own caucus stood to applaud, and were quickly joined by Conservatives to his right and Liberals across the aisle. It was a sign of respect from MPs for one of their own, a question period specialist, whose grilling of former prime minister Stephen Harper on the Mike Duffy affair in 2013 will long make every highlight reel of QP sparring.

So how did Mulcair thank his House colleagues for that spontaneous tribute while his Edmonton humbling was still stinging? “Mr. Speaker,” he began as the cheering died down, “after years of ethically challenged Conservative rule, the Liberals promised to do things differently . . . ” Shouts of protest, then a wave of incredulous laughter, interrupted him. Mulcair was succinctly slamming both rival parties seconds after they put partisanship aside to honour him. He laughed, too. But then he went on with a tough question on ministerial fundraising activities.

Far from spoiling the moment, this quintessential Mulcair response made it. What MPs admire most about his QP performances—that intense interrogatory beam shone on the issue of the hour—hadn’t been dimmed by the rebuke his own party’s delegates had meted out. Nor was he softened by a bit of clapping. And perhaps that’s one reason MPs also voted Mulcair the overall best of their number in this year’s Maclean’s Parliamentarians of the Year survey: He kept his QP form despite everything.

Asked what advice he offers rookie MPs, Mulcair says he tells them to think of their job in three parts: riding, party and Parliament. “The most visible part is the Parliament, but the work always involves the other two, especially the riding, because, as the old saying goes, all politics is local,” he says. Constituency work requires loyal, local staffers who keep an ear to the ground while the MP is in Ottawa. Listening matters in the House, too: Mulcair advises MPs to pay close attention to the responses around them when they are engaged in QP exchanges. Often, he says, the reaction of MPs nearby signals how to calibrate a follow-up question.

First elected to Quebec’s National Assembly in 1994 as a Liberal, Mulcair jumped to the NDP and federal politics, lured by the late Jack Layton’s leadership, and won a Montreal by-election in 2007. After Layton’s death from cancer in 2011, Mulcair won the NDP’s leadership race. He says debate in Quebec’s legislature can be ferocious, but incessant heckling is worse in the federal House.

He revels in it anyway. Mulcair says allowing yourself to get jaded is a luxury a good MP won’t indulge. Even after all these years, he is present for an unusually high percentage of House votes. When the NDP needs an MP to step up on short notice for committee duty—seen by many as a thankless task—Mulcair is ready. “The whip’s ofﬁce knows it doesn’t take much to get me down there,” he says. “I’m only a phone call away and I really love it.”

And Mulcair is not one of those who reflexively dismisses the House and its committees as mostly theatre. Out of all the noise and partisan tactics, he says voters surprisingly often glean something true. “Through that constant cut and thrust, a lot makes it out to the public,” he says. “My best compliment during the Duffy exchanges with Harper was when someone would stop me on the street and say, ‘Hey, Mr. Mulcair, you finally asked the question that I wanted to ask.’”