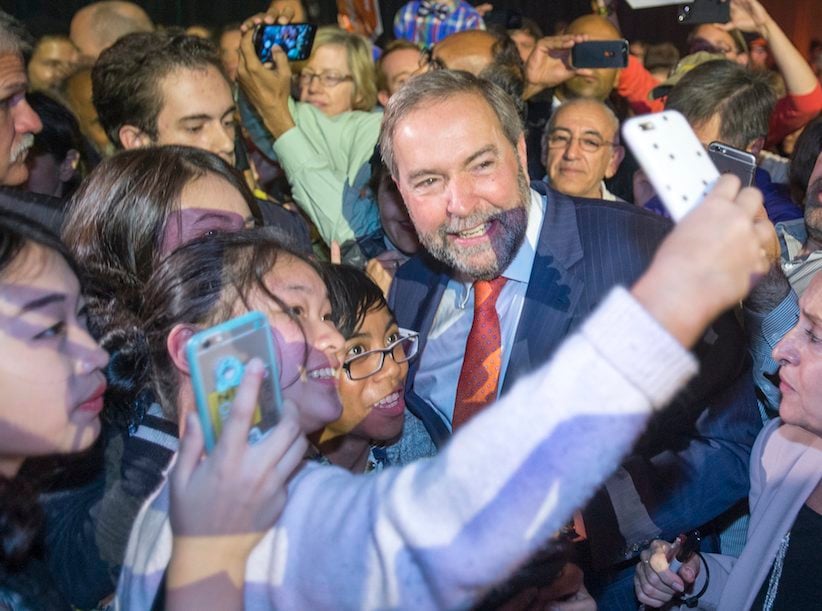 BURNABY, B.C. — NDP Leader Tom Mulcair isn’t having any talk of second or third place, insisting that after Canadians visit the ballot box Monday, he’ll be on his way to 24 Sussex Drive.

He campaigned in Burnaby, B.C., as he made his way to Vancouver for a rally later Saturday, Mulcair was asked repeatedly about what the NDP strategy would be if his party is unable to form a government.

He insisted — as he has done from the outset — that his sole focus was to defeat the Conservatives.

“My job as leader of the New Democratic Party of Canada, is to take on Stephen Harper, to defeat him on Monday, Oct. 19, and replace him with an NDP government,” Mulcair said.

“That’s my only priority between now and Monday.”

The Conservatives have been lining up newspaper endorsements across with the Postmedia group being the latest to advocate for Stephen Harper’s return to power.

The Ottawa Citizen became the latest of the network’s publications to endorse the Conservatives in a Friday editorial, joining the Edmonton Journal, The Province, the Saskatoon StarPhoenix, and at least five other papers.

Separately the Toronto Sun has also given the thumbs up, along with the Globe and Mail, which endorsed the Conservatives, but not Harper.

“What a surprise! I’m shocked!” Mulcair joked on Saturday.

He also repeated his message that the election remains a three-way race, and Canadian voters fed up with being forced to choose between either the Liberals and the Conservatives has another choice this time around.

Mulcair was also asked how long he thought would be appropriate for whichever party does achieve a plurality of seats Monday to wait before meeting Parliament.

He said the winner — him, of course — would have an obligation to do so “very rapidly.”

Given that both the NDP and the Liberals have made it clear they would not support a Harper government, speculation has been rampant that a Conservative minority win would likely mean a long delay before the House of Commons resumed.

The resignation of Liberal campaign co-chair Dan Gagnier over advice he was giving to TransCanada Pipeline over the Energy East project continued to provide fodder for the NDP.

“The fox is trying to get back into the hen house,” Mulcair told his audience.