Nov. 7: An extortion attempt against Clement after he sent sexually explicit images also puts a spotlight on national security oversight, plus a look at what a Democratic House means for Trump and the trade deal 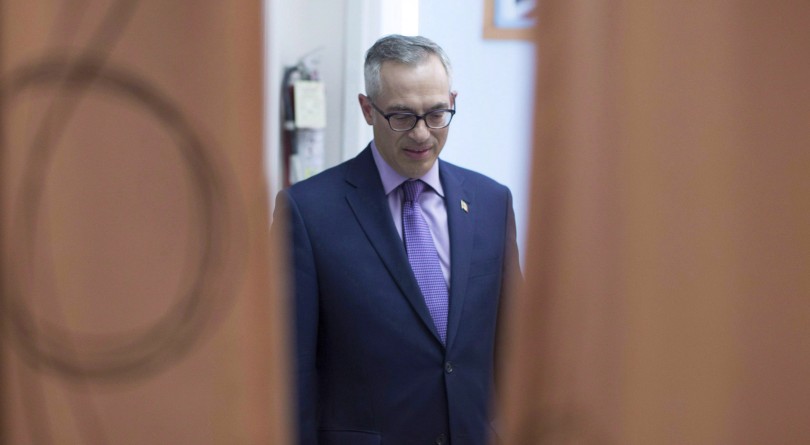 Conservative MP Tony Clement waiting to be introduced to supporters at a rally in Mississauga on Tuesday, July 12, 2016. THE CANADIAN PRESS/Chris Young

Heading into Tuesday the biggest political story in Ottawa was always going to be the outcome of the U.S. midterm elections. What could possibly top that?

Enter Tony Clement. Well, exit, actually. After admitting that he’d spent three weeks sending “sexually explicit images and a video of myself to someone who I believed was a consenting female recipient,” who then turned out to be an extortionist seeking 50,000 euros, Clement resigned as Conservative justice critic and stepped down from several Parliamentary committees. (Canadian Press, Global News)

More from Clement’s statement: “I recognize now that I have gone down a wrong path and have exercised very poor judgment. First and foremost, I apologize to my family for the needless pain and humiliation my actions have caused. I also apologize to my colleagues and my constituents for letting them down. I am committed to seeking the help and treatment I need in my personal life to make sure this will not happen again while also continuing to discharge my duties as a Member of Parliament.”

Just a day earlier it was revealed Clement was among the 10 MPs named to the new National Security and Intelligence Committee of Parliamentarians, which provides oversight of Canada’s national security and intelligence agencies. As one national security expert noted, Clement’s behaviour and the blackmail attempt is a devastating blow to an oversight body already facing skepticism from security agencies. (CTV News, Twitter)

Leashing a president: In the wake of Tuesday’s midterm vote, which saw Democrats win control of the House, Jason Markusoff looks at the rebuke American voters delivered to Donald Trump‘s presidency. (Maclean’s)

It wasn’t the blue wave some predicted, but the Democrats’ victory in the House provides the first real check Trump has faced since taking office:

The House, controlled by Trump’s opponents, will almost certainly begin scrutinizing how his presidency appears to operate to the benefit of Trump Organization. It may smoke out his tax returns and probe whether his team embraced Russian election meddling—and no more Republican-led committees indulging Trump’s “no puppet! You’re the puppet!” self-defence. Special counsel Robert Mueller’s report into potential collusion and obstruction of justice still hangs over the president; a de-Trumpified legislative body is bound to take seriously any damaging conclusions Mueller makes—to the point, potentially, of pursuing impeachment proceedings. (Maclean’s)

The Trudeau government no doubt watched election night with an eye to what the outcome might mean for the renegotiated NAFTA deal, which must be ratified by U.S. Congress before it can come into effect. But even with the Democrats now controlling the House, Canadian officials tell John Geddes they don’t expect the Democrats to pick a fight with the White House over the deal:

Some observers have predicted Democrats might flex their muscle by pushing for the deal to be revisited to strengthen certain parts, perhaps including provisions on labour rights. But there’s no mechanism to make targeted changes to satisfy the new majority in the House—and the Trump administration, like the Canadian and Mexican governments, will not want to risk reopening the whole, complex agreement, which took 13 arduous months of bargaining to finalize. (Maclean’s)

Parliament unanimously agreed to an NDP motion that called for any unused spending on programs for veterans to be rolled over to the following year. Since 2006 the Conservative and Liberal government’s have left more than $1.47 billion unspent. (Global News)

It turns out Adrienne Clarkson has been spending far more than public records show, maxing out programs for former governors general to the tune of $206,000 a year, sources have told the National Post. Meanwhile, former governor general David Johnston has vowed to release a report in the coming weeks detailing the expenses he’s incurred since leaving the post. He’s said he welcomes a review launched by the Trudeau government into spending by former GGs: “It is very important for the public to take an interest in that to be sure the money is well spent.” (National Post, Canadian Press)

Going, going, gone as of January: Quebec MP Nicola Di Iorio, who initially said in April he was resigning, who hasn’t been since on Parliament Hill since the House resumed sitting in September, and who claimed recently to be on special assignment for the Prime Minister, has finally given a timeline for his departure. Di Iorio said he’ll resign in January. (CBC News)

On Monday former NDP MP Paul Dewar received the Parliamentarian of the Year Lifetime Achievement award. His speech, a call for collaboration at a time of partisanship and cynicism, echoes particularly strongly in the wake of America’s deepening electoral divide:

Is it not time for some real change, don’t you think? Is it not time to take off the armour of our political party and work together as people representing citizens to build a better country for everyone?

In fact, we welcome people from all over the world. Why not welcome and interact with the people from different political parties? Imagine—imagine how different it would be if we put our swords down and our shields down for a moment. This is my proposition to you. (Maclean’s)