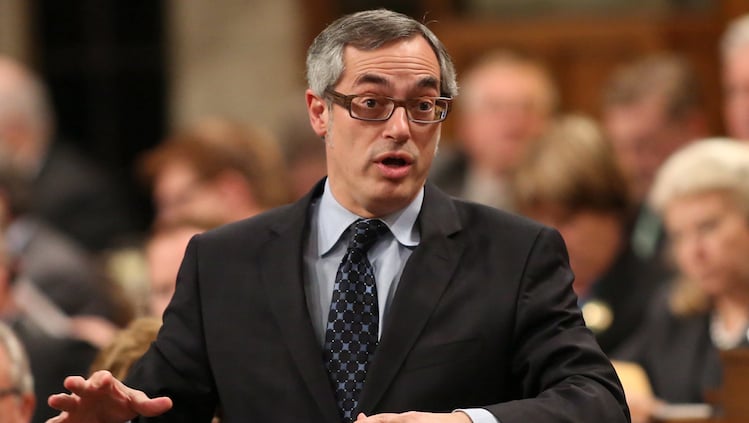 President of the Treasury Board Tony Clement . (Patrick Doyle/CP)

OTTAWA – Former Conservative cabinet minister Tony Clement declared Tuesday that he’s running for the leadership of his party — but it’s not the first time he has pursued the job.

Clement tried in 2004 when the Canadian Alliance merged with the Progressive Conservatives to form the current Conservative party, but he finished third to Stephen Harper, who led the party until last fall.

This time, he’s already leading in one area that will be key to the party’s efforts to revitalize itself after last year’s election defeat: social media.

Clement was an early adopter in Tory circles of social media platforms and went on to shape and encourage the former Conservative government’s usage of such cutting-edge communications tools, earning the nickname “the minister for Twitter.”

In launching his campaign Tuesday, he turned to those tools again to stress what will be a key theme in his campaign — the need to reach out and empower the party’s grassroots and bring in new voters.

In addition to choosing a battleground Toronto-area riding to make his inaugural campaign address, he also livestreamed it on Facebook.

An advance copy of his remarks provided to The Canadian Press was replete with references to social media.

“My first draft of this speech was less than 140 characters long,” he joked, a nod to the message limit length on Twitter. That draft? A tweet to Prime Minister Justin Trudeau, warning him his days in the job are numbered.

There’s no question Clement led the political pack in taking up social media, said Mark Blevis, a digital public affairs strategist with Full Duplex who has been observing politicians’ use of social media for years.

It has earned the 55-year-old a strong following, but could also provide a glimpse into his approach to political leadership, Blevis said.

Most politicians just push out messages, but Clement takes his followers into his living room and his jam sessions, posting pictures not only of himself, but also those taken from his point of view.

“He does talk, absolutely, but he replies. He responds to people’s comments.”

A challenge for Clement will be transforming that social media support into financial and membership support when the Conservatives gather next May to choose their new leader.

He’s up against three others for now — Kellie Leitch, Maxime Bernier and Michael Chong — but others are still considering a run.

He also spoke of his arrival in Canada as a child, and his time in government as president of the Treasury Board, which overseas the day-to-day operations of government.

While in that job he shaved billions off the government’s bottom line, but he’s also been accused of using the public purse for his own political ambition getting millions in infrastructure funding for his Muskoka riding around the G8 summit there in 2010. He was industry minister at the time.

Clement made no mention of that in his remarks.

He said his social media savvy, his personal history and his political CV make him a potential leader who represents experience and innovation.

“Tested, and ready today, to earn back the confidence of families, of millennials, and moms and dads, of urban and rural Canadians, and of small business leaders, and seniors, who want government to be an empowering force for good,” he said.

Here’s a look at who else is in, who’s out and who’s still on the fence.

Kellie Leitch. The pediatric orthopedic surgeon first elected as an MP in 2011 was the first official entrant in the race. She rolled out a campaign organization across the country on day one but that was dealt an early blow when a key organizer was charged with drunk driving offences and forced to resign.

Maxime Bernier. The Quebec MP filed his papers a few days after Leitch and has already outlined several key policy positions, including a pledge to end supply management, a controversial approach in his home province with its established farming industry.

Michael Chong. The Tory MP from Ontario has been a longtime champion of democratic reform is spending the summer holding fundraisers in a bid to bolster his campaign coffers.

Jason Kenney. The longtime Alberta MP had been thinking about a run but announced last week he’ll seek leadership of the provincial Conservatives in Alberta instead.

Rona Ambrose. A small group of conservatives, including some MPs, had been pushing Ambrose to consider making the jump from interim leadership of the party to the full time job. It would have required a rule change at the party level and efforts to make that happen failed at the party’s May convention.

Peter MacKay. The former cabinet minister from Nova Scotia now working as a lawyer in Toronto is considering a run, and with Kenney’s departure is believed to be an easy front-runner if he does.

Kevin O’Leary. The popular TV personality and businessman first mused about running for the leadership earlier this year. He only took out a party membership in May, ahead of the convention. Since then, his thinking has begun to shift; he told The Canadian Press last week he’s now considering whether to run himself or throw his weight behind another candidate.

Andrew Scheer. The former speaker of the House of Commons is spending the summer weighing his options. One key consideration for him is his young family. The Scheers have five children and the life of the Opposition leader will demand a great deal of time away.

Lisa Raitt. The popular Tory MP from Ontario and current finance critic musings about a bid have spurred an social media campaign called “Draft Lisa Raitt.” She’s also using the summer months to take stock. Family matters are weighing on her mind and some have raised concerns about her lack of facility with French.

Brad Trost. The Saskatchewan Tory is one of the foremost advocates for socially conservative positions within his party. When a policy opposing same-sex marriage was dropped from the party handbook in May, he said he was going to start looking into a leadership run.

Dan Lindsay. The former president of the College of Physicians and Surgeons of Manitoba announced in May he was forming a committee to explore a possible leadership run.