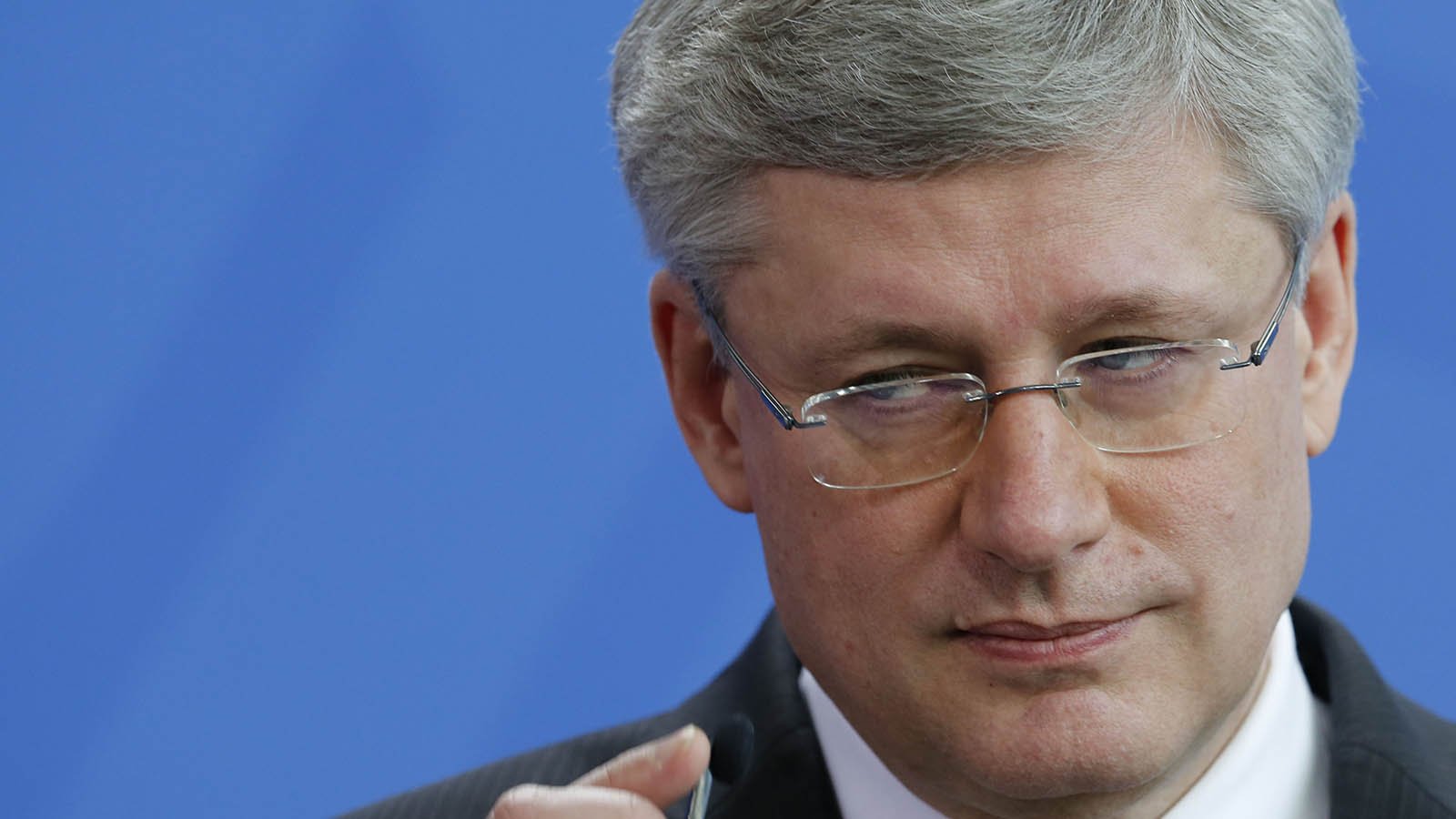 Update: The federal government will announce its decision on Northern Gateway after markets close June 17.

In any ranking of the files on which Stephen Harper would claim an edge over his opponents in the run-up to next year’s federal election, the top three might well be energy, trade and defence. Making Canada an “energy superpower” has always been the Prime Minister’s defining economic goal. Restoring the Tory brand advantage on free trade comes a close second. And staunch support for the military underpins his bid to bind together Conservative values and Canadian patriotism.

Yet in all three of these supposed strong suits, Harper now faces difficult choices when it comes to pushing past prolonged delays and making decisions with multi-billion-dollar consequences. The federal cabinet’s to-do list before Parliament breaks for the summer is dominated by the need to grapple with a controversial oil pipeline, a fighter jet purchase that long ago turned into a political fiasco, and perhaps a sweeping trade deal with Europe. In each case, making a bold move would advance the file, but also carry serious political risks.

Of the three files, insiders say the one least likely to be punted to next fall, or beyond, is the Northern Gateway pipeline. Enbridge Inc., of Calgary, Harper’s home base, has a $7.9-billion plan to pipe oil sands bitumen nearly 1,200 km from Alberta to a new Pacific tanker port at Kitimat, B.C., and on to vast Asian markets. Harper’s cabinet received a report from a joint National Energy Board panel late last year recommending approval of the plan, with conditions. There’s a stark contrast between the deep uncertainty about whether another proposed pipeline, the Keystone XL project through the U.S., will ever be approved by Washington and the expectation that Ottawa will approve Gateway soon.

Given Harper’s enthusiasm for energy exports, even the slightest hesitation might seem odd. But the federal government could be holding off on the pipeline approval to allow its proponents time to sort out what happens next. Geoff Hill, national oil and gas leader at the consulting firm Deloitte Canada, which has Enbridge as a client, says a key aim is to prevent its future from being dictated mainly by judges. “I would think nobody is going into this process hoping it will end up in court,” Hill said.

Replacing epic court battles with some sort of constructive bargaining will require delicate behind-the-scenes manoeuvring. That joint NEB panel report to cabinet has already triggered legal challenges from three B.C. First Nations and two environmental groups. They claim it didn’t properly weigh issues ranging from Aboriginal rights to whale habitats. It’s not just those predictable adversaries who have faulted Ottawa’s handling of the ambitious project. Back in the fall of 2012, CIBC executive vice-president and vice-chairman Jim Prentice—who had previously served stints as Harper’s environment and Aboriginal affairs minister—spoke out against the government’s failure to seriously consult with Natives on the pipeline’s path. “The Crown obligation to engage First Nations in a meaningful way has yet to be taken up,” he said in a speech at the University of Calgary.

Early this spring, Prentice moved from the sidelines to the playing field by going to work for Enbridge trying to build bridges to First Nations leaders in B.C. and Alberta. Only a few weeks later, he officially entered the race to become leader of Alberta’s Progressive Conservative party. But that doesn’t take him out of the picture. “With respect to this project,” Hill said, “I suspect Jim will be engaged no matter what his future role will be.” He declined to give more detail on what’s in the works for the day after a cabinet decision.

If efforts to widen support for the pipeline are shrouded in secrecy, the drawn-out negotiation of a Canada-European Union trade deal has been even more opaque. Canada and the EU have been negotiating the so-called Comprehensive Economic and Trade Agreement (CETA) since 2009. Last fall, Harper surprised many close watchers of those talks by flying to Brussels to stage a signing ceremony with European Commission President José Manuel Barroso on a CETA “agreement in principle.” To some, the occasion had a mission-accomplished feel to it. “I thought the announcement was incredibly premature,” says Dane Rowlands, director of the Norman Paterson School of International Affairs at Ottawa’s Carleton University. “It was unfortunate and probably politicized.”

Rowlands isn’t alone in speculating that Harper, facing Senate scandals and a revitalized Liberal party last fall, wanted to draw attention to economic policy. Indeed, eight months after his Brussels excursion, there’s still no deal. A key negotiating session early last month foundered on familiar obstacles, including disagreement over protecting intellectual property in the pharmaceutical sector. The political question facing Harper’s cabinet remains unchanged: How much flak is it worth taking from industries opposed to the deal to gain bragging rights about signing the biggest trade pact since NAFTA?

Even after a final text is settled, though, doubts remain about how long it might take to put it into force. The EU will have to go back to its member countries, and European officials reportedly fear it might take as long as five years to overcome their objections. “It will be difficult for them to sell economic liberalization to their voters at the moment,” Rowlands says. “The tradition is that when economic times are tough you look inward, you don’t open up.”

At home, the Harper government would like to be selling voters on the economic upside of military procurement. Its highest-profile buy, announced in 2010, was supposed to be a fleet of Lockheed Martin F-35 fighter jets. But that tentative plan sparked fierce debate over the F-35s’ cost and critical scrutiny of setbacks in the new jet’s development. In late 2012, the government announced it was “hitting the reset button” on the project, forecast to cost about $45 billion if it went ahead, and named a task force to re-examine it, including the alternatives: Boeing’s SuperHornet, the French-made Rafale and the Eurofighter Typhoon. Public Works Minister Diane Finley told a defence conference in Ottawa late last month that cabinet will be reviewing the reports on the options over the next few weeks.

The choice, according to David Perry, a senior analyst with the Conference of Defence Associations Institute in Ottawa, could come down to the F-35’s capability versus the affordability of the alternatives. Any of the rival jets might prove cheaper in a competitive bidding process, but none is, in Perry’s view, likely to match the F-35’s cutting-edge technology.

Economic spinoffs are another key factor. Last February, the government announced a new defence procurement strategy, aimed at leveraging more lasting economic benefits, while streamlining its notoriously slow system for buying big-ticket military hardware. Meanwhile, Canadian companies already working on F-35 subcontracts are lobbying the government hard, claiming Canada will lose thousands of “high-paying aerospace jobs” if it drops out of the international F-35 consortium. One possibility, Perry says, is that the government will spend whatever it takes to keep Canada’s aging fleet of CF-18s flying long enough to put off a final decision on a new jet—perhaps until after next year’s election. “I think that’s certainly an option,” he says. As with Gateway and CETA, an electoral reckoning looms large. Bold decisions can pay big political dividends, but also extract a price. This summer, Harper’s cabinet is making that tricky calculation three ways.