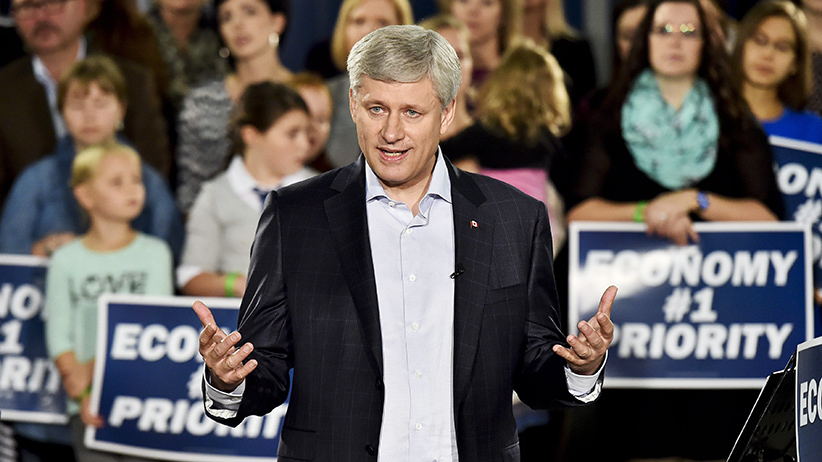 SASKATOON – Sheri Rudoski was beaming as she left a speech Stephen Harper delivered to parents and wailing babies in Saskatoon on Wednesday.
She wasn’t enthusiastic about a historic, 1,500-page trade deal reached among Pacific Rim nations, which the prime minister touted all week.
Instead, Rudoski was keen on the Conservative pledge to retool the Employment Insurance program and spread benefits by an additional six months.
“It was a really exciting announcement for moms,” said Rudoski as her son Finn wriggled in her arms. “It would affect me personally and it affects my vote.”
It’s been a long-held belief by Conservatives that pocketbook perks play to Harper’s strengths and it’s likely he will use the final campaign stretch to emphasize these issues.
On Saturday, Harper’s finance minister Joe Oliver was in Toronto to do just that, emphasizing the Tory economic vision.
The Conservatives have spent the last nine years refining their sales pitch, which includes a promise to ensure the middle class directly benefits from a low-tax plan.
Harper’s promises include a commitment for a new permanent home renovation tax credit, the home accessibility tax credit, a new tax credit for single seniors, and enhancements to Registered Education Savings Plans.
Each pledge puts cash in voters’ hands without a deficit or big take hikes, Harper says.
The Tories have also tried to directly contrast their plan with the Liberal pledge to run deficits of up to $10-billion a year for three years to put money into infrastructure projects.
As voters headed into the Thanksgiving weekend, the prime minister said he had presented “cold, hard choices” to Canadians.
Political scientist Jim Bickerton, who teaches at St. Francis Xavier University in Antigonish, N.S., said Harper may have succeeded in changing the channel to the economy this week.
“Things are going their way,” he said.
Bickerton also said Harper shifted attention away from public criticism over the government’s response to increasing the number of Syrian refugees by continuing to hammer the niqab issue.
The Conservatives are opposed to the use of face coverings at citizenship ceremonies, even though their policy has been deemed unlawful in court.
Harper told CBC this week he is also considering a ban on the face covering for public servants.
“It was a deliberate strategy because they needed a change in the conversation,” Bickerton said.
While Harper continues to draw support at campaign events, he has also faced protesters at rallies across the country.
An upbeat mood at a Thursday event was put on pause when a protester seemed to dash towards the prime minister before he was escorted out.
Earlier in the week, more than a hundred people behind a chain link fence could be heard outside a rally in Saskatoon, including native women who pounded drums and called on other aboriginals to vote against Harper.
A small group of protesting autoworkers were also hit by insults from party loyalists exiting an event in Oshawa, Ont. calling them “petulant, five-year-old brats” for their criticism of the TPP deal.
Cheryl Maloney, a native activist who has urged the Conservatives to consider holding a public inquiry into murdered and missing aboriginal women, said Tory opponents are growing more frustrated.
“We don’t expect anything different from Harper,” she said, of his continued refusal to launch an inquiry.
Maloney spent part of her week at an Assembly of First Nations meeting in Enoch, Alta., to encourage aboriginal people to cast a ballot against the Conservatives.
“I’m hoping to have more impact on votes than Harper,” she said.