Steven Blaney promises to bring back a new face-covering law 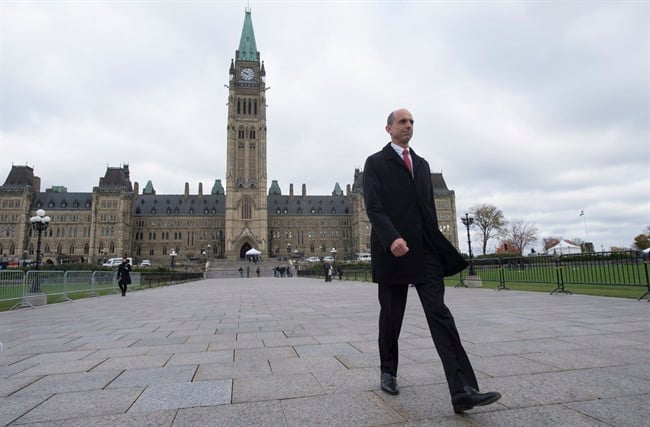 OTTAWA – Conservative leadership candidate Steven Blaney says he would introduce a bill calling for Canadians to have to show their face when they vote or take the oath of citizenship.

In his first policy announcement since revealing his leadership bid on the weekend, Blaney said Monday it’s time for a discussion on Canadian identity.

The former public safety minister says he would bring back a new face-covering law as a way of stemming what he calls the “slow and steady erosion” of Canadian values.

Under the proposed rules, all federal officials — regardless of whether they offer services on the front lines — would be forbidden from having their face covered when dealing with the public.

“The entire public service, whether in direct contact (or not) with the population, must reflect Canadian society,” he said.

A Blaney-led government wouldn’t hesitate to use the notwithstanding clause to stop the Supreme Court of Canada from striking down the measure.

“We must ensure that these new Canadians we welcome understand how we live,” Blaney said. “We do not want our country to become like the country they left.”

He says the discussion has been going on for years in Quebec, which he lauded for playing a leading role in dealing with the challenge.

Public hearings are underway in the province on Bill 62, the Liberal government’s attempt to legislate on religious accommodation.

The previous Parti Quebecois government introduced its controversial secularism charter in 2013, but it was never implemented following the PQ election loss in 2014.

Blaney, MP for the riding of Bellechasse-Les Etchemins-Levis near Quebec City, believes Canada is ready to have a similar “robust, mature” discussion on identity.

Blaney was behind a private member’s bill in February 2011 that would have required faces to be uncovered when people voted. It died on the order paper.

He said the new version of that bill would include changes to the oath of citizenship to reflect the equality between men and women as well as amendments to force federal officials to have their face uncovered when they provide services.

Both the PQ and the Conservatives lost playing the identity card.

However, Blaney is the second Conservative candidate to raise the identity issue after fellow leadership hopeful Kellie Leitch, who called for the screening of “anti-Canadian values” for newcomers.

That position has been repudiated by the majority of her leadership opponents, especially as the Conservatives were accused of practising divisive politics in the 2015 election.

Fellow leadership rival Michael Chong told reporters Monday the population has no more appetite today for identity issues than it did a year ago.

“That’s the message the people sent in federal and provincial elections in Canada,” Chong said. “The parties, when they introduced policies on things like the niqab, the electors and Canadian citizens were (somewhat more concerned) with economic issues.”