The massive, complex TPP trade deal may give Harper’s campaign a critical boost. Will it do the same for the Canadian economy? 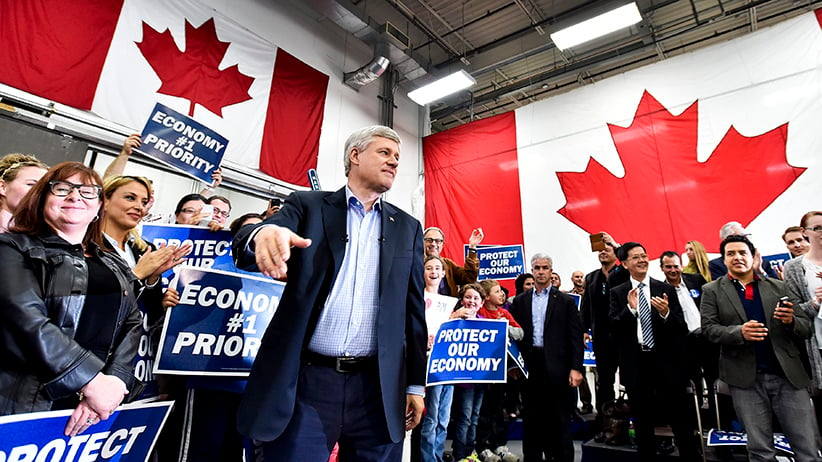 Never one to stray far from his talking points, Prime Minster Stephen Harper trumpeted the negotiation of the 12-nation Trans-Pacific Partnership (TPP) as yet another example of how the federal Conservatives are “protecting” Canada’s economy. Yet, while international trade agreements are usually good for business and consumers, there remain many questions about the sprawling and complex TPP deal, and whether Canada actually negotiated itself into a winning position.

In broad terms, the historic pact promises to give Canadian businesses—from cattle ranchers to forestry firms—improved access to about 800 million consumers in 11 Pacific Rim countries, including Japan, which collectively represent about 40 per cent of the global economy. Canadian beef producers, for one, are hoping the deal will allow them to triple their exports.

In exchange, the other 11 signatories, which include the U.S., Vietnam, Australia, New Zealand, Mexico, Singapore and Malaysia, will be permitted to make further inroads into the Canadian marketplace, offering Canadian consumers more choice and—ideally—lower prices on a wide range of products.

“Today, we take a significant step forward toward achieving our stated goal of protecting our economy and creating another 1.3 million well-paying jobs,” Harper told reporters, making the most of the opportunity to announce a massive trade deal (five years in the making) in the middle of a tight federal election campaign. “In a global economy, there is no more certain way to secure long-term economic growth and prosperity than by expanding market access for job-creating Canadian businesses.” He later suggested that if a Liberal or NDP government attempted to reverse course and pull out of the TPP, Canadians would look back on the decision as a “terrible error.”

The sweeping agreement, the full details of which have yet to be released, was announced early Monday after a marathon negotiating session in Atlanta. Still on the bargaining table over the weekend were a number of controversial cross-border issues, including, one assumes, Canada’s supply management system that sets prices for eggs, milk and poultry and limits foreign competition in a bid to protect smaller family farms.

While Ottawa managed to make good on its promise not to junk the system, which is blamed for limiting consumer choice and raising prices, it nevertheless agreed to open the door a crack by granting foreign producers access to just over three per cent of Canada’s dairy market, and about two per cent of the market for poultry over five years. There are, however, plans to offset the impact—and, presumably, the potential for lost votes in rural parts of the country—through a $4.3-billion program that will compensate affected Canadian farms over the next decade, with some dairy producers receiving up to $165,000 annually.

Ontario’s automotive industry is also in line for a shake-up under the TPP. In addition to phasing out the 6.1 per cent tariff on fully assembled cars imported into Canada, foreign-made vehicles and core parts will now only require 45 per cent of their content to come from one of the 12 signing countries, while 40 per cent of car components will have to meet the same test. By contrast, NAFTA rules require 62.5 per cent of fully assembled vehicles to come from the free trade zone and 60 per cent of auto parts.

The auto-sector changes did not sit well with the union representing Canada’s auto workers, which predicted that 20,000 auto-related jobs would be lost amid a flood of Japanese imports made with parts manufactured in low-wage Asian countries. “All the signs point to the TPP posing a major threat to good-paying jobs in Canada,” said Unifor National President Jerry Dias in a statement. The union also took issue with the fact that the TPP deal was negotiated, at least in its final stages, during a federal election campaign, when governments are supposed to limit themselves to ordinary, non-controversial business as part of so-called “caretaker” rules. Finance Minister Joe Oliver, however, argued that participating in the TPP talks was a matter of “national urgency,” since it represented a rare opportunity for Canada and involved several of its most important trading partners.

The deal’s signing put the Liberals and NDP in an awkward position. Liberal Leader Justin Trudeau, perhaps in an attempt to reach out to more conservative voters in an election where the Liberals have tacked left, responded by reaffirming his party’s “pro-trade” preference, but hastened to add that he would need to study the deal’s details before passing judgment. NDP Leader Tom Mulcair, meanwhile, took a slightly harder line by refusing to be bound by the Harper government’s “secret deals,” while taking issue with sacrifices being made on behalf of dairy farmers and auto workers. The TPP still needs to be ratified by its signatories before it can enter into force.

Keith Head, a professor at the University of British Columbia’s Sauder School of Business who specializes in Asian commerce, praised the trade deal’s overall focus on counterbalancing China’s influence in the global economy with a co-operative U.S.-Japan approach, as well as its attempt to balance the interests of both corporations and other stakeholders. As for Canada, he argues that any job losses in Ontario’s auto sector are likely to be offset by the gains enjoyed by consumers who will be able to buy cheaper cars. The same goes for the relatively small concessions made on behalf of dairy farmers.

Head says a less talked-about, but potentially more far-reaching, issue for Canadians is the granting of exclusive patents to pharmaceutical companies who make complex biologics drugs. During the talks, the U.S. and Japan had demanded 12-year exclusive arrangements for drug companies, while Australia had been pushing for shorter five-year exclusivity periods that were aimed at getting generic versions of the drugs, called biosimilars, to market sooner and bringing down prices for patients. The final agreement attempts to split the difference with either an eight-year exclusive arrangement or five years of “data-exclusivity,” plus three more years under the regulatory oversight of the TPP-participating country. While eight years is in line with Canada’s current policy, Head says Canada “should have been over there with the Australians on this issue.” Why? In contrast to the roughly 20,000 farms affected by changes to the supply management regime, every one of Canada’s aging 35 million residents may need to take a potentially life-saving biologic drug at some point. And if prices are permitted to skyrocket, Head warns, “That’s very bad for the consumer and the taxpayer in a system like Canada’s.”