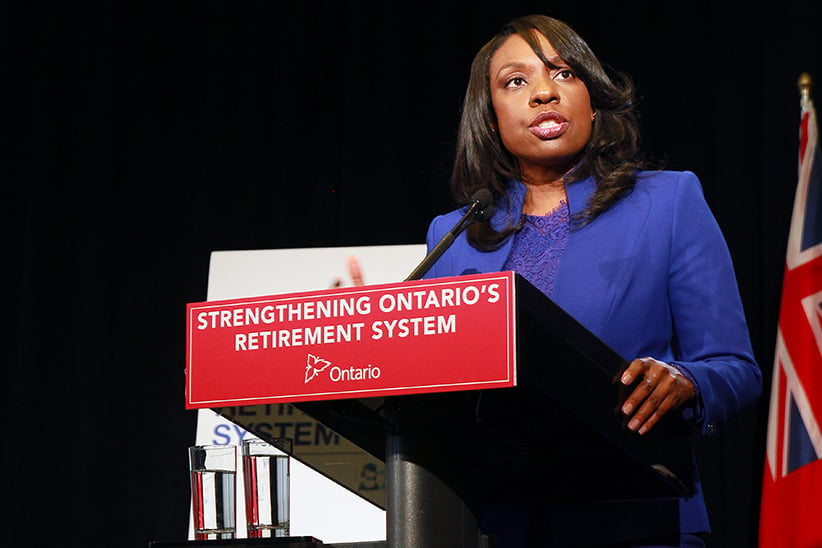 Among the hottest issues on the federal campaign trail is Ontario Premier Kathleen Wynne’s plan for a new provincial pension, which is vehemently opposed by Stephen Harper’s Conservatives. Wynne’s Ontario Retirement Pension Plan (ORPP) would be mandatory for any Ontario worker not already covered by a comparable workplace pension.

About 3.5 million workers would be covered by 2021 when the ORPP is fully phased in, with those employees seeing 1.9 per cent deducted from their pay and their employers contributing an equal amount. Harper slams those deductions as “an enormous tax increase.” Ontario’s associate minister of finance Mitzie Hunter was in Ottawa today to defend the ORPP. This interview with her has been edited.

Q: One criticism that’s raised about your plan is that it’s forcing people to save rather than leaving it to them to plan for their futures. What do you say to that?

A: First of all, I’d say that it’s responsible. This is about ensuring that people have adequate income when they retire. When we look at the state of workplace pension plans right now, two-thirds of Ontarians have no pension plan at work. What we’re saying is the Canada Pension Plan [CPP], while it’s good, it’s not enough at $6,900 in benefits on average in Ontario. The CPP maximum is $12,500, but the average is a little less than $7,000.

Q: And what you’re aiming to do is augment the CPP with your new plan.

A: What we’re doing is strengthening the retirement savings floor. The ORPP is aiming to replace 15 per cent [of pre-retirement income]. If you combine that with CPP, that’s 40 per cent. We believe that’s a strong savings floor for people, and that is the responsible thing to do. People can continue to save for their retirement goals beyond that, and those voluntary tools are very important.

Q: There’s been a high-profile clash over this between your Ontario Liberal government and the federal Conservatives. In the end, if you can’t run the ORPP through existing federal institutions, wouldn’t it cost a great deal for you to administer the new pension separately?

A: We are proceeding. This plan will be implemented Jan. 1, 2017. We’re always concerned about the federal government not being co-operative. We believe they should be treating Ontario fairly. At the same time, we’ve been looking at other options. We’ve been looking at third parties.

Q: You’re looking for potential administrators of the pension outside the Ontario government?

A: Absolutely. In terms of being mindful of costs, that’s actually built into our legislation and our policy. This will be an efficient, well-managed plan, best in class. We’ll be benchmarking it against the best-managed plans anywhere in the world. We’ll be drawing on Ontario’s strength in pension management. We are setting up a strong governance framework. This week our premier announced that [former Bank of Canada governor] David Dodge will chair a nominating council, together with Claude Lamoureux, the former president and CEO of the Ontario Teachers’ Pension Plan, as well as Gail Cook-Bennett, who was the first chair of CPP Investment Board. That will assist us in putting together the best board and CEO.

Q: There’s a federal election on, and Prime Minister Harper is saying businesses in Ontario don’t want this. It’s just an additional cost when it comes to hiring and employing people. How do you respond?

A: Well, yes, there is a federal campaign. But we can’t play politics with people’s pensions. This is about ensuring that when people retire they retire with adequate incomes. An aging population, low savings rates, declining workplace-based pensions—all these things combined really show that we have a crisis on the horizon. I’ve done consultations right across this province and talked to businesses of all sizes, and workers. The concern that we should have when it comes to Ontario’s economy is that if people retire without adequate income, that has the potential to slow consumption. It’s not good for the individual, it’s not good for business, and it’s not good for the economy as a whole.

Q: But what about those business concerns about payroll deductions?

A: We are mindful of business and the impact on business. We have introduced a staged approach, enrolling the largest employers first, followed by medium-sized ones, and in 2019 the smallest employers. And we’re also phasing in contributions.

Q: We’re talking about this within sight of Parliament Hill. I don’t see Ontario cabinet ministers around here all that often. Why did you come to Ottawa to talk about this issue?

A: We want to ensure that this message is taken broadly. 3.5 million Ontarians will be benefiting from the ORPP. By 2020, all Ontario workers will be in the ORPP or a comparable workplace pension plan.

Q: But are you here specifically because you want to be talking about this where the federal election is top of mind?

A: The ORPP is beyond that. It’s about future generations.