Trans Mountain: Will someone please build this government a pipeline? 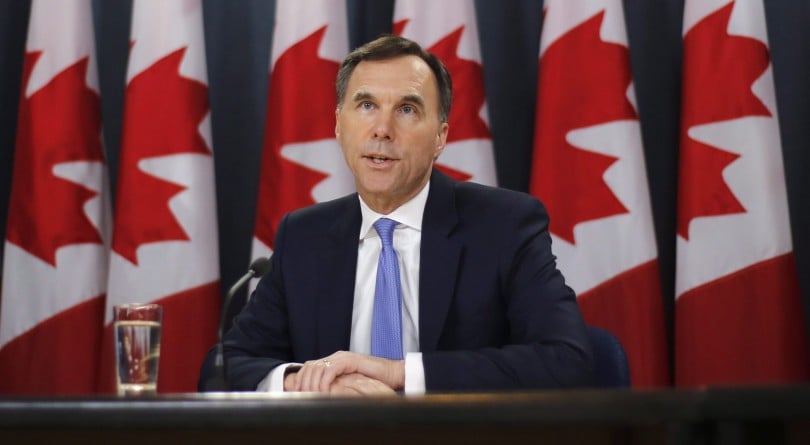 Finance Minister Bill Morneau speaks about the Trans Mountain Expansion project at a press conference in Ottawa on Wednesday, May 16, 2018. THE CANADIAN PRESS/ Patrick Doyle

The government of Canada is prepared to indemnify Kinder Morgan or “another party who might wish to take over” against financial losses on the Trans Mountain expansion project resulting from the B.C. NDP government’s opposition, finance minister Bill Morneau said on Wednesday.

Speaking in Ottawa on the same day as the pipeline company’s shareholders meet in Calgary, Morneau reiterated the Justin Trudeau administration’s oft-repeated lines on the undertaking. Canada is a great place—to invest, he specified, but his verbiage and adjectives could be transposed to any feel-good slogan—because its “blessed” with resources, including “the resourcefulness of our people.” The Trans Mountain project is in the national interest, he said.

He didn’t say “this pipeline will be built,” but there was lots about “getting this project done” and “striving to get an agreement.”

READ: Trudeau says ‘We’re all getting what we want’ on pipelines. He means nobody’s happy.

The new thing today was the promise to compensate Kinder Morgan—or anyone else who will build the thing—for “unnecessary delays that are politically motivated.” That’s a category of one, as far as Morneau is concerned. His prepared remarks singled out B.C. premier John Horgan as the roadblock, noting that his “stated intentions are to do whatever it takes to stop the project, which is unconstitutional in its very purpose.”

Horgan’s government started this latest round of wrangling when it indicated it would attempt to forestall any additional bitumen flowing through its territory. And the province has sought a B.C. Superior Court reference on its jurisdiction to enact such regulations.

But Horgan hasn’t been protesting in Burnaby nearly every day for the last few months or been arrested for demonstrations outside the Kinder Morgan terminal, as many Indigenous leaders have. And the government’s isn’t the only Trans Mountain-related case ongoing. Several B.C. First Nations have filed court challenges to the project.

Asked about those forms of opposition, Morneau chose to applaud his government’s environmental policies and highlight the spread of its consultations. But he pivoted quickly to the form of uncertainty-causing actions he was there to talk about: Horgan’s. “By dealing with that particular delay and uncertainty risk that comes in, we are enabling a project that we know is commercially viable to move forward,” Morneau said, maintaining a sombre look throughout the proceedings.

About that. The CBC reported Tuesday that Kinder Morgan hasn’t been especially obliging in the behind-the-scenes negotiations Morneau has been undertaking. Last month, the company’s CEO questioned the viability of the project, saying that he’d achieved clarity that it “may be untenable for any private party to undertake.”

Sign up for the Maclean’s Politics Insider newsletter here >>

Wednesday’s press conference was a half-hour long rejoinder to that assessment, even if it was never explicitly mentioned. “We think plenty of investors would be interested in taking on this project,” especially in light of the indemnification offer, Morneau said in the prepared portion of his appearance, though he emphasized that Kinder Morgan quitting the project is an “if,” not a “when.”

Whom those other parties might be, he couldn’t say. “I’ve been engaged in discussions with Kinder Morgan, as you know,” he said, adding a couple of reiterations later that he didn’t “have anything to report in terms of other discussions.”

Of course, the venture in question is the Trans Mountain Expansion Project, i.e. more pipeline than is already there. Would the government be looking to facilitate the sale of that existing infrastructure to the new player? “The Trans Mountain pipeline has been there since 1953, so we see that the twinning of that pipeline is one of the most effective ways to get our resources to market responsibly,” Morneau said. “We see a path to an outcome that will ensure that we can get the advantage that we’re seeking.” Specific plan to come.

The Conservatives have spent the last several months asking for a date, time and place for the first shovel in the ground on this project, and the Liberal benches’ response has typically included a dig at the “zero inches of pipeline going to tidewaters” that their opponents produced while in office. So the government’s urgency to get someone, anyone, to put some tubing under the topsoil is understandable.

Morneau didn’t have names to name on Wednesday, but what he did have was a belief that a private player would want to build this thing. “Where our confidence comes from is an understanding that this project provides economic advantages,” Morneau said, proffering again that promise of indemnification.

Just how much the government is prepared to put up, and how it will untangle Horgan-related losses from other factors, he could not say, though he promised he government will be acting in a “sound, and fair, and beneficial for Canadians” way.