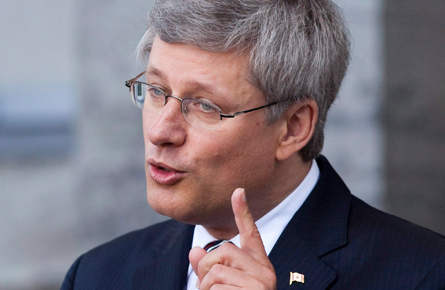 I’ve been mystified by Stephen Harper’s willingness to squander so much political capital on an issue as trivial as the long-form census. Only slightly less so by the media’s piling on, treating this as a matter of great national importance, and by the level of emotional investment so many apparently attach to census-gathering.

Stephen Harper seeks to diminish or destroy the Liberal Party to replace them with the Conservatives as Canada’s default choice for government. His greatest challenge is to dismantle the modern welfare state. If it can’t be measured, future governments can’t pander.

That’s the choice, I suppose. Either what the Harper government is doing with the long-form census doesn’t matter, or it does. Obviously Moore has a lot more company than Taylor does. Indeed, lately Moore’s company includes Taylor: since July 22 this whole business has gotten too hot for Stephen’s liking and in his blog and on Twitter he’s joined the nobody-cares crowd, arguing that this whole business is an invention of the “push media,” by which he means news organizations that cover a story he doesn’t like for longer than he likes.

But clearly Stephen Harper thinks it matters, because he has burned two useful ministers, Tony Clement and Stock Day, rather badly in advancing this little project. And I take Taylor’s July 22 post to be an example of the disarming frankness that makes him an easy guy to like. The whole post is worth a look. In his trademark prose style, Taylor describes Harper “integrating seemingly transactional initiatives into something transformative.” You see, the country is suspiciously full of “net tax receiving organizations.” Harper, Taylor writes, “has tried the ideological argument against these groups for years. But ideology is by its nature debatable; removing the framework of debate is his shortcut to victory.”

Removing the framework of debate? “If one day we have no idea how many divorced Hindu public transit users there are in East Vancouver, government policy will not be concocted to address them specifically.” This would be, Taylor adds, “a huge blow to the welfare state.”

This seems to me entirely more credible as a motivator than Clement’s and Day’s late-breaking concern for jackbooted census thugs hauling Jewish or many-bedroomed citizens off to the stockade for failing to divulge their pertinent information. And indeed, to say the least, there’s precedent for this analysis of the way things work, or could: that major social change happens incrementally and through stealth, rather than through the kind of romantic Thatcherite Big Fight for which some of my colleagues are so often nostalgic.

Indeed, Harper and his associates have for decades argued, with considerable accuracy, that comparable change-by-stealth was the preferred method of the Liberal party in power. Harper’s first chief of staff, Ian Brodie, wrote a doctoral thesis and book arguing that “the Canadian government” used the Court Challenges Program (since cancelled by Harper) to advance the agenda of “disadvantaged groups” in Charter challenges. Brodie cites Ted Morton and Rainer Knopff and their pioneering study of what they dubbed the “Court Party,” a loose-knit, like-minded set of “networks of activists and professionals” that “bring together social reform-minded professionals and academics in public interest groups, government departments, independent government agencies, the criminal bar, and the law schools.”

I think this next bit is key. “Morton and Knopff’s central observation is that the Court Party is a political minority in Canada,” Brodie wrote. “Electoral politics is therefore not an advantageous arena for them. The Court Party prefers to advance its agendas through institutions that are insulated from electoral politics. The courts, quasi-judicial tribunals, and the administrative arms of government are arenas where the Court Party’s professional skills and abilities can make up for their lack of electoral support.”

Electoral politics was, of course, advantageous to the Liberal Party of Canada during the early 1980s and most of the 1990s. But Brodie argues that Liberal governments very often preferred not to fight their social fights in the open (in this, by the way, he is joined by many other observers; Chantal Hébert made the same case often during the late Chrétien years). A little help to the Court Party’s assorted representatives went a long way. “The Canadian government has encouraged groups to litigate in Canada, particularly through the Court Challenges Program. It therefore casts doubt on the concept of the disadvantaged group itself.”

The purest expression of this line of argument on Parliament Hill came in 2003, from Opposition Leader Stephen Harper. Ontario judge Roy McMurtry had handed down his ruling permitting same-sex marriage. Harper argued the Liberals had plotted for a very long time to produce precisely this result. “They wanted to introduce this same-sex marriage through back channels,” Harper said then. “They had the courts do it for them, put the judges in they wanted, then they failed to appeal, failed to fight the case in court.”

But reporters protested: Roy McMurtry was a lifelong Progressive Conservative, appointed by Mulroney. “Well, he’s a former Tory,” Harper said. “But whether he’s conservative or not is a matter of terminology.”

Some readers will think this long digression into Supreme Court-land takes me pretty far off topic, as some readers did when I wrote a whole column pointing out that Court Party co-author Rainer Knopff and a similarly-minded colleague worked on the committee that picked the next governor general. The GG isn’t a court, the census isn’t a court challenge. But I think most readers will see how Harper’s longstanding fascination with “back channels” as a means for advancing the agenda of actors who constitute “a political minority in Canada” and for whom “electoral politics is not an advantageous arena” plays, not only in the census battle, but in much of what he has done as Prime Minister.

So, like the Stephen Taylor of three weeks ago, I believe the census fight is absolutely at the centre of what Harper is trying to accomplish as prime minister.

One last thought. Taylor is (was?) sure the ultimate goal of all this manoeuvering is to “dismantle the welfare state.” It’s entirely possible to suppose that, at least over the medium term, which could last decades and indeed maybe forever, the real result would simply be the realignment of massive state action to serve the electoral interests of the Conservative Party. If one day we have no idea how many rock-ribbed family-values farmers and small tradesmen of Icelandic, Ukrainian, Scottish and Irish descent there are between Kenora and Kelowna, it will be easy enough for Tony Clement and Stockwell Day to claim there are 147 million of them and every one needs a tool-belt tax credit and a little something extra to help raise the kids. That choice, of course, will come later. First Stephen Harper believes he must kick out the slats of the world the Liberals have been building since Trudeau.