Paul Wells: The PM has created a multiply redundant federal cabinet where no one will have enough power to influence anything. How little things have changed. 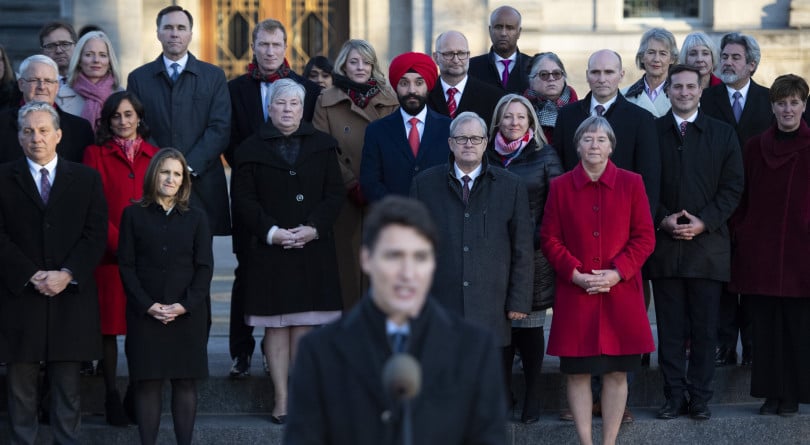 Members of cabinet stand behind Trudeau as he speaks to reporters following a swearing in ceremony at Rideau Hall on Nov. 20, 2019 (THE CANADIAN PRESS/Justin Tang)

It’s a trick question, of course. None of them is. Differences among them will be settled at the Block Formerly Known as Langevin, from whence emissaries will be dispatched to inform the eight economic ministers of their opinions. Just as emissaries were dispatched, 14 times, a year ago to inform the attorney general of her opinion on the proper conduct of criminal trials.

A multiply redundant federal cabinet will quickly become a pretext for central control even if that wasn’t the point of building it that way, because none of the title-holders holds enough of the elephant to discern its shape, let alone influence its path. A lot of European countries have a minister of finance, who writes budgets, and a minister of the economy, who here would once have been called the minister of industry. But Justin Trudeau has always preferred a multiplicity of inputs without worrying too much about results, and this does not seem to have much changed.

(An important exception: Two ministers who were never persuasive, Kristy Duncan at science and Ginette Petitpas-Taylor at health, have been bounced out to parliamentary roles, deputy government leader and deputy whip. This is unfortunate on compassionate grounds—Duncan in particular tried her hardest, all the time—but it’s a fair call.)

READ MORE: What Chrystia Freeland’s real role will be

I wrote here two weeks ago that the Liberals were coming to think of themselves as the big winners of October’s election, and that it would not make them particularly prone to change their ways. That’s their right; Andrew Scheer and Jagmeet Singh and Elizabeth May took turns visiting Trudeau to insist he implement their election platforms, and it would hardly do for the Liberals to be the only apologetic party in the Commons. But it’s also turning into a handy guide for predicting Trudeau’s actions. Almost everyone in his shuffled cabinet won a larger margin of victory in their ridings in 2019 than in 2015. They feel like, after everything that happened this year, they won big. Meanwhile Jane Philpott is between jobs, Jody Wilson-Raybould will have lots of time to inspect the drapes at the back of the Commons, and Chrystia Freeland is deputy prime minister. This is a valuable lesson in the rewards for staying in line.

So Navdeep Bains, the architect of a perfectly incomprehensible supercluster strategy, will be responsible for not fixing it. Jean-Yves Duclos, the nicest man in this government, will be responsible for enforcing fiscal rigour at treasury board, which means there won’t be any. Some changes are puzzling: Jim Carr was minister for trade diversification for about a year. He was the first minister with that title. Now there is no minister for trade diversification (the title hasn’t been given to anyone else while he concentrates on his health). What changed? You may say titles don’t matter. I would be glad to agree. But then why is the government still generating twee portfolio names around the clock?

Other changes are encouraging. Patty Hajdu is a confident, activist minister with an independent streak. Finding her at health is encouraging. It’s not clear what can be done about the opioid crisis, which killed an estimated 1,082 Canadians in the first three months of this year and has killed about 1/3 as many, since 2016, as died in World War II. It can confidently be predicted that Hajdu will set to work immediately.

About Freeland at intergovernmental affairs, it may be best to reserve judgment. In the 1970s and 1980s, people in that job had clout because they were negotiating major constitutional change and therefore had something to offer. This government hasn’t done much bargaining. It’s not clear how much manoeuvring room it has.

On that score, I would be worried, if I were a Liberal, about Steve Guilbeault at Canadian heritage. Most of the French-language questions to Trudeau on Wednesday were about the apparent snub of Guilbeault, a career environmental activist who isn’t the environment minister. Every time the Trudeau government sins against ecological virtue, there will be a chorus calling on Guilbeault to resign on principle. He begins to look like Amanda Simard, the franco-Ontarian who was a member of Doug Ford’s governing Ontario caucus until she wasn’t.

(That Guilbeault does not seem to be any kind of devotee of the performing arts is a second-tier concern, although I do recall that Bloc Québécois leader Yves-François Blanchet used to work in the recording industry and still knows Quebec’s cultural industries well. So for the Liberals’ sake, Guilbeault had better take a briefing well.)

A last word on David Lametti, who remains the justice minister and attorney general. Ethics Commissioner Mario Dion noted that the first time a government staffer wrote to Jody Wilson-Raybould’s office to ask why she wasn’t ordering a deferred prosecution agreement (DPA) for SNC-Lavalin was in mid-August of last year, seven weeks after the 2018 Budget Implementation Act received royal assent, making such settlements legally possible. So, seven weeks after DPAs become an option, Ben Chin at Bill Morneau’s office wrote to Wilson-Raybould’s office to ask, what the heck, why no deal?

This is interesting because David Lametti has now been Canada’s attorney general for 10 months. Every day he does not order the Public Prosecution Service of Canada to issue a DPA is a day on which his policy is functionally identical to Wilson-Raybould’s. The PMO and Morneau’s office pushed Wilson-Raybould repeatedly to change her mind. Lametti is getting all the time in the world. Is it because he’s a man? Is it because he quickly learned she had very good reasons to make the decision she did? Life is full of mysteries.