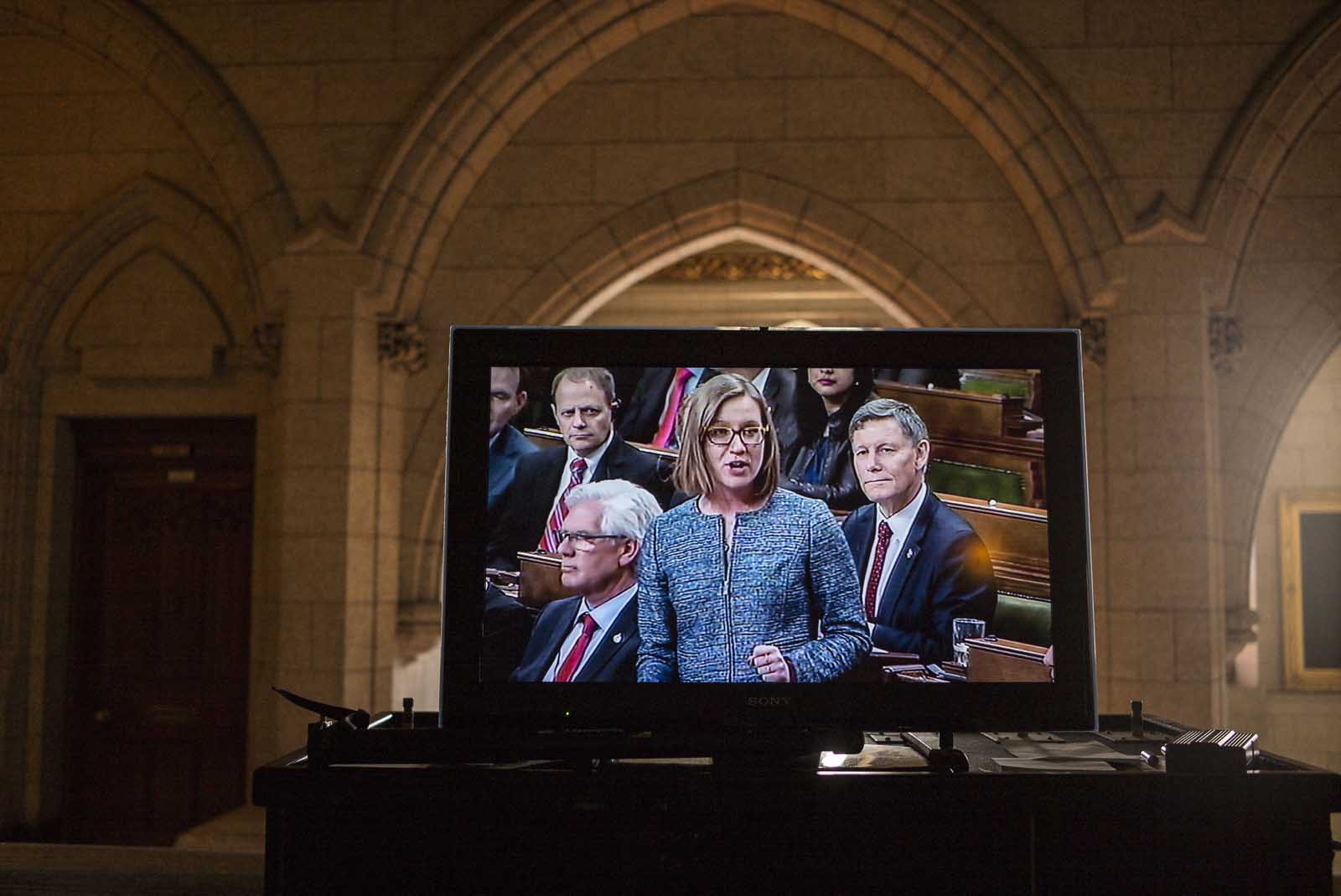 On TV monitor outside House of Commons during Question Period Minister. (Photograph by Peter Bregg)

In a mandate letter for newly appointed Democratic Institutions Minister Karina Gould, Trudeau makes it clear that electoral reform — once top of mind for the Liberal government — is no longer on the agenda.

“Changing the electoral system will not be in your mandate,” the prime minister writes in the letter, released Wednesday.

A variety of consultations across the country have shown that Canadians are not clamouring for a change in the way they choose their federal government, the letter continues. It also rules out the possibility of a national referendum.

“A clear preference for a new electoral system, let alone a consensus, has not emerged,” Trudeau writes. “Furthermore, without a clear preference or a clear question, a referendum would not be in Canada’s interest.”

Trudeau repeatedly promised — both as a campaigning Liberal leader and as prime minister in a speech from the throne — to get rid of the current first-past-the-post voting system in time for the 2019 federal election.

The Liberals have since given themselves some wiggle room, saying they would not go ahead without the widespread support of Canadians.

Canadians made their views known through the House of Commons special committee on electoral reform, town halls held by MPs from all parties, the travels of former minister Maryam Monsef and a much-maligned online survey called MyDemocracy.ca.

The mandate letter shows that Trudeau and do not believe those consultations have produced their desired — albeit undefined — level of support for electoral reform, let alone any clarity on a preferred replacement.

The about-face is sure to provoke a passionate response from their political rivals.

The New Democrats, who have long called for a system of proportional representation, went into a meeting with Gould on Tuesday hoping to hear the new minister repeat Trudeau’s original, unequivocal promise: that the 2015 vote would be Canada’s last under first-past-the-post.

“That is why that ministry exists,” MP Nathan Cullen, the NDP’s democratic reform critic, said Tuesday. “That’s why she sits in cabinet, in large part — it’s to fulfill that promise.”

The Conservatives, who had pushed for a referendum, are likely to be pleased with the status quo, but will no doubt excoriate the government for breaking such a prominent campaign commitment.

There are also some big new items in the mandate letter.

Trudeau wants Gould, Defence Minister Harjit Sajjan and Public Safety Minister Ralph Goodale to come up with ways to defend the Canadian political system against cyberthreats and hackers — a possible consequence of the “voter fraud” and hacked email controversies emanating from the raucous U.S. election.

“This should include asking the Communications Security Establishment (CSE) to analyze risks to Canada’s political and electoral activities from hackers, and to release this assessment publicly,” he writes.

Trudeau also wants the three ministers to ask the CSE to “offer advice” to Elections Canada and political parties — including opposition parties — on “best practices” regarding cybersecurity.

The letter also asks Gould to take the lead on developing legislation to bring stricter rules — and greater transparency — to political fundraising, a response to months of negative headlines about so-called cash-for-access Liberal fundraisers.

The promised legislation would require cabinet ministers, party leaders and leadership candidates to publicly advertise their fundraisers in advance, and release a report after the fact with details of the event.

The proposed new law, if passed, would also require events to take place in publicly available spaces, a move designed to address concerns about well-heeled donors bending the ears of cabinet ministers in private homes.

“Other measures may follow after discussion with the other political parties,” Trudeau writes.

The letter also repeats earlier commitments, such as repealing some elements of the previous Conservative government’s Fair Elections Act and exploring the idea of an independent commissioner to organize leaders’ debates during federal elections.

It also includes reviewing campaign spending limits and working with Treasury Board President Scott Brison and Justice Minister Jody Wilson-Raybould to increase the openness of government, including reviewing the Access to Information Act.