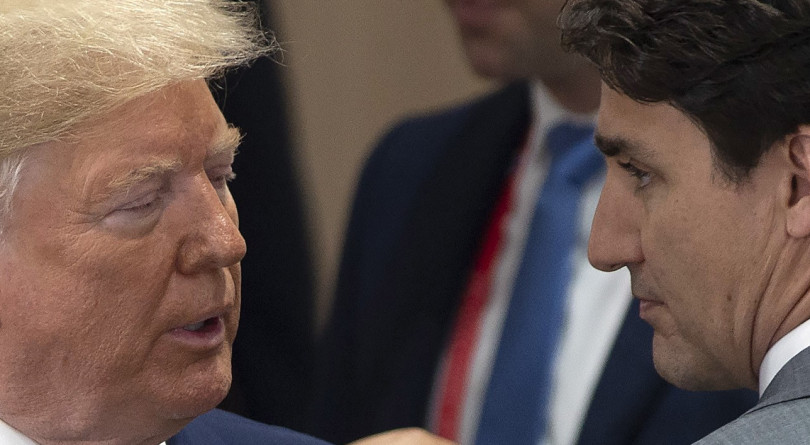 They are home: Donald Trump‘s call for four Congresswomen to “go back” to the “totally broken and crime-infested places from which they came” (three were born in America) drew rebukes from world leaders, though all, including Justin Trudeau, stopped short of calling Trump’s comments racist. Outgoing British Prime Minister Theresa May called the comments “completely unacceptable,” the same words Boris Johnson, who hopes to replace her, used. Meanwhile, when Trudeau was asked if he thought Trump’s comments were racist, he said “I think Canadians, and indeed people around the world, know exactly what I think of those comments. That is not how we do things in Canada. A Canadian is a Canadian is a Canadian.” (The Irish Times, Globe and Mail)

From Washington, Allen Abel writes about the deafening silence from Republicans to Trump’s comments, and America’s long, ugly history of telling non-whites to “go back” home:

Telling foreigners to go back where they came from is as American as pulled pork, high-school football and the Ku Klux Klan, and as old as the republic itself. As far back as 1783, barely two years after the British surrendered to George Washington, the Freemen of the City and Liberties of Philadelphia were voting to “mutually pledge ourselves to expel, with infamy … those degenerate and apostate sons of America who hold principles incompatible with our republican government” and recommended that they be sent to “the new-erected town of refugees in Nova Scotia.” (Maclean’s)

Check the calendar: Oct. 21 is the date set for the next federal election. It also happens to be a somewhat obscure but important Jewish holiday. That could have possible implications in some battleground ridings, leading to a court battle this week that could force voting day to be moved:

Chani Aryeh-Bain had just four days to soak in her victory before the trouble began. On April 14, 2019, the 51-year-old mother of five handily clinched the nomination to run for Parliament under the Conservative banner in her lifelong riding of Eglinton–Lawrence in midtown Toronto. She was so excited, she didn’t take a good look at the election calendar until days later. Nobody on her team did.

“We did not clue into the extent of the disadvantage immediately,” says Ira Walfish, a community activist who volunteered for Aryeh-Bain. Four days after she secured the nomination, Aryeh-Bain crafted a worried email to Canada’s Chief Electoral Officer, Stéphane Perrault, requesting he change the date of the federal election. They hoped for the best, but Walfish remembers the team’s mindset at the time: “This is not gonna go well. (Maclean’s)

Promises promises: In a pair of posts over at CTV News Rachel Aiello examines Trudeau’s record during his first term, from how the country changed under his leaders, to the promises he made but failed to keep.  (CTV News)

Petro-pride: Legions of Albertans are showing their allegiance to oil by wearing their hearts on their sleeves… and caps and T-shirts and hoodies. From the latest print edition of Maclean’s, Jason Markusoff looks at what’s behind the surge in pipeline patriotism:

Petro-patriotism has gathered strength in oil country, after five years of economic slump. Albertans have long intertwined their collective identity with their province’s key industry, but have never before worn it on their chests like this. Like any patriotic/nationalistic movement, it identifies external foes: environmentalists (some abetted by foreign funding!) and the Trudeau government that have delivered pipeline delays and environmental measures like the carbon tax and an oil tanker ban on the northwest B.C. coast. Newly elected Premier Jason Kenney has eagerly donned the mantle as the industry’s chief defender: his campaign pickup truck bore the bumper sticker, too.

The pride comes, of course, with dollops of defiance: as much of the world and Canada demand climate change solutions, the petro-patriots insist Canadian fossil fuels are already the world’s most responsibly produced and that the burden to act should shift elsewhere; some still deny there’s a human-caused problem at all. “Global warming is a made-up story,” Vit Jankovic, a retired pipeline technician, told Maclean’s at the rally. “I like to think of it as scientists playing their video games to see who can get more warming in.” (Maclean’s)

In theatres now: Anne Kingston attended one of the screenings of Unplanned, the American anti-abortion movie that has found its way into the 2019 election campaign, so you don’t have to:

The protesters hadn’t shown up yet when I walked into the first screening of Unplanned at the one Toronto theatre showing it. Death threats directed at a B.C. theatre had resulted in it cancelling screenings. In Toronto, more security hovered than usual; two staff members hung around in the theatre as the movie played and the audience of 50 or so gasped and murmured on calculated cue.

If you’d told me a year ago I’d be sitting in a Cineplex, watching an anti-abortion movie made by an American producer of low-budget evangelical Christian flicks as necessary background for covering Canadian politics, I wouldn’t have believed it. But here we are. Let that sink in. (Maclean’s)

What the polls say about Election 2019

A growing number of voters in Ontario say Premier Doug Ford will deter them from supporting the Conservatives in the next federal election. Sixty per cent of those polled in the province felt that way, up from 54 per cent in June, according to the survey by Corbett Communications. (Toronto Star)