Trudeau and resource projects: the urge to get it done 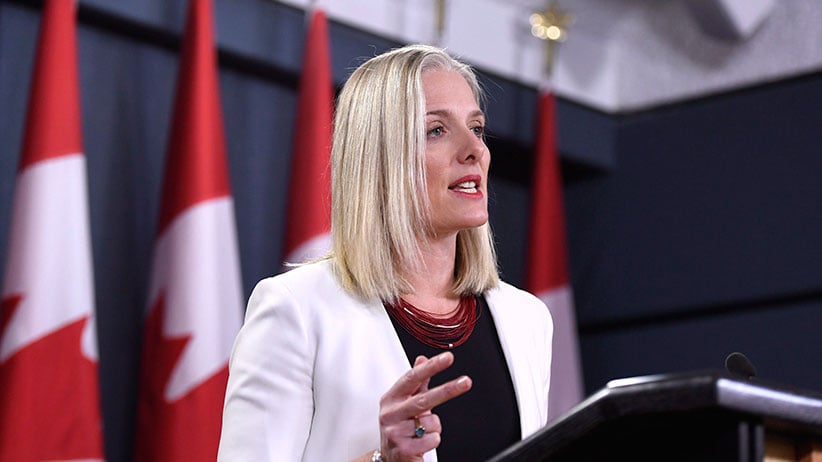 Minister of Environment and Climate Change Catherine McKenna speaks during a press conference on the government’s environmental and regulatory reviews related to major projects, in the National Press Theatre in Ottawa on Thursday, Feb. 8, 2018. THE CANADIAN PRESS/Justin Tang

There was Catherine McKenna, the environment minister, in a roomful of Ottawa reporters on Thursday as she unveiled and defended the Trudeau government’s new assessment rules for major projects. These are the rules by which oil pipeline projects can be assessed for their environmental impact, so of course the stakes were sky-high.

McKenna described a system that will be awfully impressive if it works: More projects will be assessed, each according to a wider set of criteria, with a greater number of interested groups invited to intervene in the assessment. And to hear the minister tell it, it’ll all happen faster than under the old rules.

Leaving aside the odds on all of this working as advertised, it’s striking how much of an emphasis McKenna put on speed and predictability in her remarks. The point was even clearer in a prepared quote from Jim Carr, the natural resources minister, which was distributed with the press material.

“A new wave of resource development is coming with more than $500 billion in projects planned over the next 10 years,” Carr said, or was reputed to have said. “We are building a better Canada, where investors, companies and all Canadians can have confidence that good projects will be approved in a timely manner and  held to the highest standard.”

The very assertion that this new Canada is still being built suggests that so far it doesn’t exist—that until now, investors couldn’t have confidence that good projects would be approved in a timely manner. Recent historical evidence suggests the same thing. It’s becoming a problem for Canada. It could become a bigger problem if it isn’t fixed.

The nation stands transfixed as the NDP governments of Alberta and British Columbia feud over the fate of Kinder Morgan’s Trans Mountain project. The Conservative opposition is demanding that Justin Trudeau come back from San Francisco to fix the problem. It’s not clear why he needs to fix it this week, or why he’d have better luck now than he did last year, or the year before, or better than Stephen Harper had before him.

But it’s clear that at bottom, Trudeau intends the same thing Harper did: That a pipeline get built. “We’re going to ensure that pipeline gets built because it is in the national interest,” the Prime Minister told reporters in San Francisco. And I had to smile because the phrasing was so familiar.

Six years ago Joe Oliver was Stephen Harper’s minister of natural resources. On the heels of Barack Obama’s refusal to promptly sanction construction of the Keystone XL pipeline through U.S. territory, Harper went on the fritz for a while, and Oliver with him—threatening and denigrating opponents of pipeline projects, flirting with an overture to China, and above all deeply preoccupied with the prompt approval of oil pipelines specifically, and other natural resource projects more generally. The open letter Joe Oliver published was his manifesto, and his boss’s. That letter is one of maybe a half-dozen crucial documents for understanding the Harper decade.

MORE: In B.C. and Alberta’s pipeline fight, only one side is unified

“Anyone looking at the record of approvals for certain major projects across Canada cannot help but come to the conclusion that many of these projects have been delayed too long,” Oliver wrote. He mentioned the Mackenzie Valley Gas Pipeline project, first proposed in the 1970s and never built, a totem of alienation in the country’s Western resource-producing regions. One way to fix such obstruction, Oliver argued—in terms Catherine McKenna could have used today, and in fact basically did—was to improve major project assessment. “Our regulatory system must be fair, independent, consider different viewpoints including those of Aboriginal communities, review the evidence dispassionately and then make an objective determination,” Oliver wrote. “It must be based on science [ed. note: !!!] and the facts.”

“We believe reviews for major projects can be accomplished in a quicker and more streamlined fashion,” Oliver continued, before concluding with the words Trudeau echoed today, six years later: “It is an urgent matter of Canada’s national interest.”

The punchline, of course, is that of the major pipeline projects under consideration when Oliver was a minister—Keystone XL, Energy East, Northern Gateway—none has been built, six years later.

Harper Conservatives and Trudeau Liberals would be appalled at any suggestion they’ve essentially collaborated in the same decade-long wild goose chase, so let’s cheerfully grant both sides the differences in approach that help each believe they’re not the other. The point is that we’re now up to two consecutive prime ministers who’ve identified pipelines as constituting part of Canada’s “national interest,” a term no national government invokes lightly. And yet they’re still coming up snake-eyes.

That’s why Trudeau was sounding all get-er-done in San Francisco, and why McKenna and Carr were signing a Financial Post op-ed whose theme was that their process would ensure success in building big resource projects.

Again I’m less interested today in whether they’ll succeed than that building big things is the goal. Inevitably a lot of the current debate is bound up in the environmental politics (I’m tempted to say the theology) of oil. But the question is bigger: Is Canada a place where any project that crosses provincial borders and traverses an array of unceded territories can happen?

People with deep pockets are watching. On the same day McKenna made her announcement, Suncor’s CEO Steve Williams folded his hand, declaring that Canada’s just become too hard a country to spend a few billion dollars in. Last autumn the Fraser Institute published a report suggesting that business investment in Canada is second-lowest out of 17 advanced economies.

The Trudeau Liberals’ vaunted but still embryonic Canada Infrastructure Bank is designed to lure big international investors for big projects. Months after the Bank announced the names of its board, it still has no CEO and the only project publicly known as a candidate for CIB investment, Montreal’s audacious regional rail network, looks like it’s costing more and arriving later than planned, though so far not seriously so.

Trudeau entertainingly got in trouble four years ago for saying he had “a level of admiration” for China’s “basic dictatorship.” It’s worth recalling the entire thought: What he liked about Chinese dictatorship wasn’t the enforced cap on procreation or the systematic persecution of Tibet. It was the brisk execution of major projects. “Their basic dictatorship is actually allowing them to turn their economy around on a dime,” Trudeau said. In hindsight it seems Trudeau was not expressing admiration so much as envy.

When I suggest that Canada may be developing a reputation as a nice place where nothing big is ever permitted to happen, government sources are quick to put things into perspective: Canadian policy gridlock is a pretty mild problem, they say, compared to the chaos in much of the world. The next dollar you invest in Canada is likely to have a happier life, they say, than your next dollar invested almost anywhere else. And there’s something to that.

But the scale of the investment Trudeau hoped to attract is incompatible with the suspicion that any next dollar anyone invests in Canada will just lie there like a latke. And that helps explain why this prime minister is increasingly intent on making something—really almost anything—big happen fast.