Trudeau and Scheer agree: Scheer could be the next prime minister 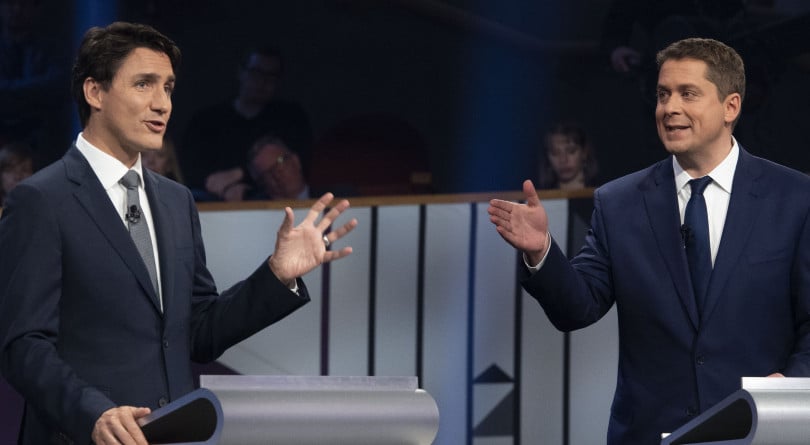 Barry’s backing: Most Canadians still have a soft spot for the previous occupant of the White House, so Liberal supporters were no doubt thrilled when Barack Obama chimed into the Canadian election in the final days of the campaign with some warm words for their guy. “I was proud to work with Justin Trudeau as President,” Obama tweeted. “He’s a hard-working, effective leader who takes on big issues like climate change. The world needs his progressive leadership now, and I hope our neighbors to the north support him for another term.” Thanks, said a grateful Trudeau.

It was a powerful and remarkably well-timed volley in the “progressive” war of words between Trudeau and NDP leader Jagmeet Singh, with Obama mirroring Trudeau’s line that he’s the progressive leader Canada needs, as opposed to a progressive opposition. (For his part Singh carefully quibbled with Obama’s tweet: “I’ve got a lot of respect for Mr. Obama, I think in this regard he is wrong.”)

He can’t do that! (Actually he can): While Andrew Scheer said he’s not terribly interested in what “former foreign leaders” have to say, Conservative twitter was up in arms at the perceived foreign interference in the election, but as Elections Canada noted, that’s not how it works.

Prime Minister Scheer: While Obama’s endorsement of Trudeau may have cheered Trudeau supporters, and might even inspire some wandering Liberals to return to the fold, Trudeau latched on to Scheer’s assertion that he’s “going to get a majority” with his own assessment: Yes, Scheer might. “We could wake up next Tuesday with a government led by a new leader,” Trudeau said, acknowledging he might not be prime minister come Tuesday —  a message tailored to keep progressives from straying.

Proportionally speaking: Let’s take a moment to visit an alternative reality where Trudeau didn’t bail on his promise to make 2015 the last election decided by a first-past-the-post voting system. In his latest post for Maclean’s, 338Canada‘s Philippe J. Fournier looks at how this tight election might end if proportional representation were a real thing:

The Conservatives and Liberals would still be statistically tied for first place, but their averages would take a serious dip from the current numbers (see current seat projections here). Neither party would stand even close to the 170-seat threshold for a majority.

The NDP would win on average 61 seats—more or less double where its current projection stands under FPTP.

Without question, the most dramatic change would be the Green Party representation: Under this PR scenario, the Greens would win on average 32 seats—a near ten-fold increase compared to their current projection of three or four seats. (Read more.)

Kapow! Blam! Meh.: Meanwhile, devoid of any big ideas to inspire voters and unable to put any real distance between themselves, the Conservatives and Liberals kept slugging away Wednesday. Scheer, if elected, promised to implement a $20,000 fine for politicians who violate the federal Conflict of Interest Act, which allowed him to regurgitate his favourite talking points about Trudeau and the SNC-Lavalin controversy. As for the Liberals, Marc Garneau posted a clip of Scheer sitting and browsing on his phone while the MPs sang O Canada three years ago, a not-so-subtle dig at Scheer’s dual American citizenship. (Scheer said he did so because the Liberals were using the anthem as a political statement, having just voted to amend the anthem’s lyrics to make them gender neutral.)