Trudeau and Wilson-Raybould, before the fall

Image of the Week (retrospective edition): A photo taken the moment the PM gave Jody Wilson-Raybould her 'dream job' captured the sense of promise around the new government in 2015. Now it speaks only of loss. 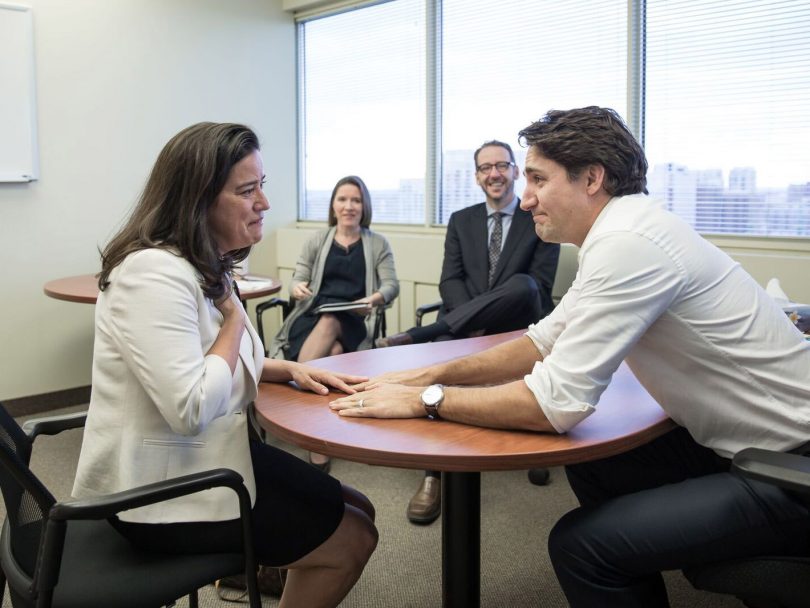 Joy. Gratitude. Surprise. Even disbelief. Jody Wilson-Raybould’s face communicates multitudes in this Oct. 29, 2015 photograph taken by Justin Trudeau’s omnipresent photographer Adam Scotti. It’s part of #first100days, a curated collection of hope-filled imagery capturing a new government in transition. In the background, the architects: Trudeau’s chief of staff, Katie Telford, and principal secretary, Gerald Butts. The moment captured—Wilson-Raybould being told by an emotive, tactile Trudeau that she’ll be Canada’s justice minister and attorney general—is historic. The former B.C. regional chief for the Assembly of First Nations wasn’t the first woman to take on the roles—that was Kim Campbell in 1990. But as the first Indigenous person overseeing national justice, Wilson-Raybould, more than any other Trudeau cabinet minister, embodied the Real Change mantra. What more powerful, emotionally charged, change-is-finally-here signal could the government make? What better proof of its claim that Canada’s “most important” relationship is with Indigenous peoples? Not even four years later, the photograph exists as a poignant “before”—before a Jan. 14 cabinet shuffle saw Wilson-Raybould moved to Veterans Affairs; before allegations that the PMO, including Telford and Butts, put pressure on the AG to protect Montreal construction giant SNC-Lavalin and Liberals’ electoral fortunes; before Wilson-Raybould’s Feb. 12 cabinet resignation; before Butts’s resignation; before fall-out from the former minister’s excoriating Justice Committee testimony ensnared the government in an existential crisis that cuts to the very core of its identity, an identity once defined and buttressed by images like this one.