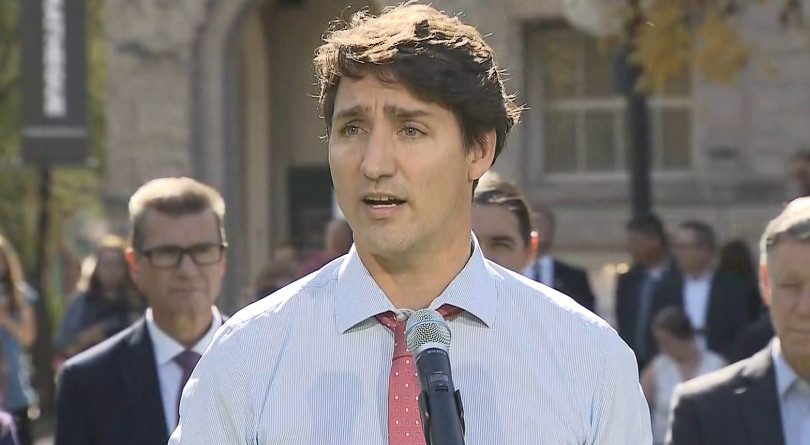 What’s a progressive prime minister to do when he can’t remember how many times he painted his face and hands brown and black as a joke?

1, 2, 3: A day after two photos emerged showing Justin Trudeau in blackface  — from the only two occasions he ever engaged in that “racist” behaviour he initially assured reporters — Liberals were gut punched by a video of a third incident. Global News got the video courtesy of the Conservative Party, Andrew Scheer admitted, which had received it from a “concerned individual.” How long had the Conservatives been sitting on it? Scheer avoided answering that question. But that was secondary to the main show: Trudeau trying to save the Liberals’ chances for re-election.

We’ll have to wait for the next round of post-blackface scandal polls to know whether Trudeau’s second apology on Thursday— which was decidedly less focussed on himself (“I’m pissed off myself,” he said Wednesday night) than on those hurt by his behaviour — delivered before a crowd of politely applauding supporters in Winnipeg, reassured Canadian voters.

In the meantime Trudeau’s speechwriters are no doubt working on his next encore-encore apology should more photos emerge, which Liberal officials told La Presse is the case.

Dehumanizing: Writing at Maclean’s Andray Domise explores the history of blackface and argues it isn’t just mockery or having fun at the expense of offended minorities that’s the problem. It is the continuance of a white supremacist tradition:

While the forms of scientific racism that came en vogue during the 19th century (led by Arthur de Gobineau’s The Inequality of the Human Races) helped propagandize lawmakers and the gentry class against the enfranchisement of the lesser races in America as well as European colonies in the Caribbean, Africa, and South Asia, blackface operated as a tool of ideological capture among lower-class mainstream white audiences.

In other words, as Europe invaded and colonized Africa and the Orient, audiences everywhere from London and Paris, to Toronto and Montreal, were treated to Jim Crow performances. Audiences cheered negro melodies in New Brunswick, as British gatlings and cannons were loosed upon Zulus in Ulundi. (Maclean’s)

Singh’s moment: Until Wednesday night the Conservatives were not hopeful about their chances on Oct. 21, while the NDP looked susceptible to the Liberal ploy to scare progressive voters into sticking with Trudeau to avoid electing a racist Conservative government. Then everything changed, writes Stephen Maher, creating opportunities for Scheer and in particular Jagmeet Singh:

This election will be the first where millennial voters outnumber baby boomers. The electorate is younger, and more diverse than it was in the last election. According to the 2016 census, 22 per cent of Canadians are visible minority, with a median age of just 33. This is the future of Canada, not just in the country’s multicultural heart, downtown Toronto, but just about everywhere.

Trudeau has put diversity at the heart of his government, making a strong argument to those voters. His argument got much weaker on Wednesday night, and Singh’s argument—that he can be their champion—got a hundred times stronger. (Maclean’s)

That thing the boss did: Several members of Trudeau’s diverse cabinet have expressed disappointment at the pictures. Amarjeet Sohi said in a tweet he was “disheartened” by the “indefensible” images but considered Trudeau’s apology to be sincere. Meanwhile Liberal candidate Greg Fergus said there was “a lot of confusion and hurt” when the images came to light, but that he doesn’t “believe that anybody has ever lived their lives without making errors.” (CTV News)

As for Defence Minister Harjit Sajjan, he spoke at length with Maclean’s Ottawa bureau chief John Geddes about the controversy and explained why he accepts Trudeau’s apology:

Q: I’m curious, though, about how your own conversation with him went.

A: What I want to focus on is the excellent words that he has used. I know him well enough to know that his [public] apology was absolutely sincere. The conversation that I had with him was very meaningful, and I know that it was heartfelt from him as well.

Q: But Mr. Trudeau is such a polished performer. How can you be sure? Wouldn’t his words of regret have been more convincing if he had come out and talked about dressing up repeatedly in blackface before being forced by a news story to apologize?

A: I’ve lived with this my entire life. I’ve seen many leaders, many leaders, go through a time when certain comments weren’t acceptable. I’ve seen a lot of lip service throughout my time, and I can tell you straight out that Justin, in his apology, was heartfelt. I think I’m a good judge of character. (Maclean’s)

No big deal: Finally, amid today’s fallout, one of the Sikh men photographed with Trudeau’s darkened hand draped over his shoulder at the now-infamous 2001 Arabian Nights gala, has defended Trudeau’s costume that night. Sunny Khurana told OMNI Punjabi he didn’t consider Trudeau’s painted face to be racist: “He wasn’t trying to demean anybody who was a person of colour, and from what I can recall from that function, it never came across as that, not at all,” he says. “I mean I didn’t even think twice of it. It was a good party, we had fun, it was a theme party. It’s definitely not a racist act.” (OMNI Punjabi)