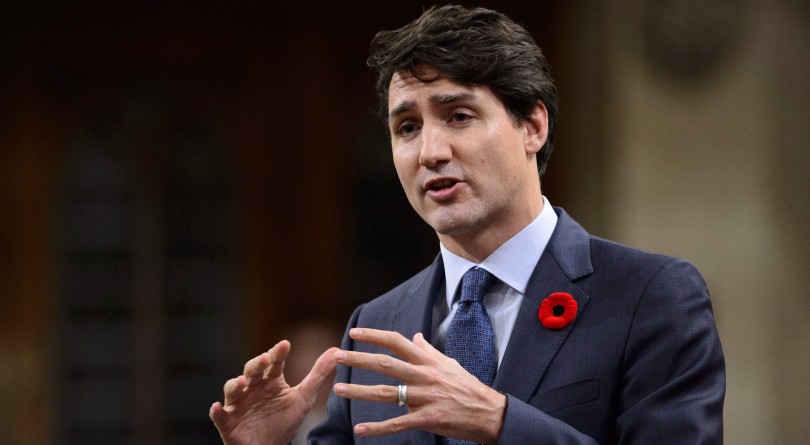 Prime Minister Justin Trudeau stands during question period in the House of Commons on Parliament Hill in Ottawa on Wednesday, Nov. 7, 2018. THE CANADIAN PRESS/Sean Kilpatrick

It’s tempting to blame CSIS for failing to uncover Tony Clement‘s sexting predicament, given the agency screened him for the position, writes Stephen Maher. However the Clement sexting saga is also yet another example of parties and politicians not taking security risks seriously:

Many politicians see themselves as members of a separate, superior class of people who need not answer to their inferiors, so it can’t be much fun for the spooks who have to vet them.

The responsibility for making sure this works falls at the feet of the Prime Minister, who set up the committee, but the opposition has not helped. In August 2017, Trudeau wrote to Andrew Scheer asking for the names of eight Conservative MPs to be considered for appointment to the committee. Scheer wrote back with two names: Clement and Gord Brown (who tragically died in May). The NDP did the same thing, responding with only one name: Murray Rankin.

I can understand why the opposition parties don’t want the Prime Minister dispensing patronage in their ranks, but the government had good national security reason for wanting more than one name per job, and the opposition ought to have co-operated. (Maclean’s)

A comprehensive trade agreement between Canada and China—the kind of deal that Donald Trump insisted he be able to block as part of the USMCA talks—is still on Ottawa’s radar. So says international trade minister Jim Carr, the latest in a parade of federal and provincials to visit China in recent weeks. Many have said the best way forward is to strike sectoral deals with China that avoid raising the ire of the Trump administration. Carr says Canada’s keeping its options open: “It’s not one or the other. These are trade conversations over a period of time. Trade is not an event and we’re having a continuous dialogue with our Chinese counterparts about a whole variety of products.” (Canadian Press)

As Canada pushes to negotiate trade deals with China and Canadian businesses look to China as an alluring market, we need to “weigh the benefits of continued business-as-usual engagement against the costs to the democratic values we cherish” writes J. Michael Cole, a former CSIS analyst now based in Taipei:

Even as the Canadian government ignores many of the warnings and recommendations made by its intelligence analysts and allies, China continues to acquire Canadian firms involved in sensitive sectors. Perceptions that Ottawa isn’t paying sufficient attention to these, and to China’s “sharp power” in general, risk undermining trust in Canada’s reliability as a member of the “Five Eyes” intelligence grouping; the same threat has faced New Zealand, another member, in the past year. We should not forget that breaking the bonds that unite us is also part of Beijing’s strategy, all with the aim of weakening the U.S.-led liberal-democratic world order. (Maclean’s)

Meanwhile, USMCA’s future continues to look shaky after the Democrats won the House in the midterms. During the negotiations, when Trump wasn’t insulting Canada’s prime minister, he was focussing his ire on Mexico, which he accused of using cheap labour to steal jobs from America. The USMCA deal includes minimum wage levels for a certain share of Mexican auto production, but Democrats insist the measures don’t go far enough. (New York Times)

Another issue looming over USMCA (there are a lot of them) is America’s tariffs on Canadian steel and aluminum. Trudeau says he brought the issue up with Trump when the two leaders met at a dinner in Paris, and that he would like to have the issue resolved before they meet again at the G20 summit in Argentina, the expected site of the USMCA signing ceremony. But Trudeau dodged questions about whether Canada has put any conditions on the signing ceremony, repeating one of his most common refrains from the past year: “Discussions and work is ongoing. And as always, I won’t be negotiating in public.” (CBC News)

Neil Young let loose at Trump over the President’s response to the fires devastating California. In a blog post Young, who lost his Malibu house in one of the fires, blasted Trump, who claimed the blazes were the result of poor forest management:

California is vulnerable — not because of poor forest management, as DT (our so-called president) would have us think. As a matter of fact this is not a forest fire that rages on as I write this. We are vulnerable because of Climate Change; the extreme weather events and our extended drought is part of it… Our temperatures are higher than ever here in our hottest summer on record. That has not helped. DT seems to be the Denier. (I’m holding back and not using the word liar just because it rhymes with denier.) It really is time for a reckoning with this unfit leader. Maybe our new Congress can help. I sure hope so. (Variety)