Canada-U.S. bilateral ties might be today's story, but Canada's long game has to be in its multilateral relationships 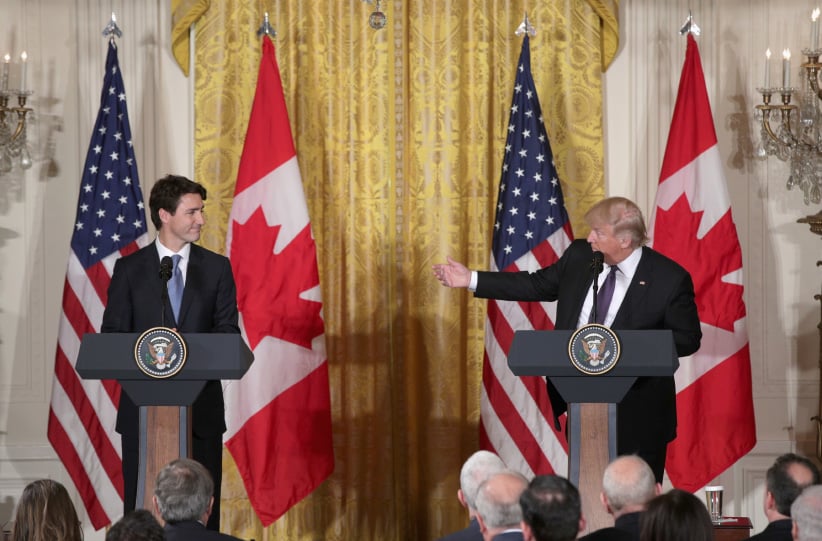 There was a moment, when Foreign Affairs Minister Chrystia Freeland paused to answer questions from reporters outside a federal cabinet meeting held in Calgary late last month, when the Liberal government’s strategy for weathering the weirdest U.S. presidency ever seemed suddenly to come into focus. After she alluded breezily to the benefits of the Canada-U.S.-Mexico trade agreement, Freeland added, rather more firmly: “But, of course, our relationship with the United States is primarily a bilateral relationship, and I think Canadians know and understand that.”

The strategy behind that assertion was worth mulling over as Prime Minister Justin Trudeau met today with President Donald Trump in Washington. Trump might try to bully Mexico, sneer at the European Union, risk a trade war with China, and even question NATO, but Canada hopes to stand apart from all that. Trudeau’s plan is evidently to give Trump no reason to lump Canada in with foreign relationships he perceives as more deserving of his ire.

That requires restraint. Trudeau had already demonstrated plenty. He wisely resisted denouncing Trump during the 2016 presidential campaign, even when Hillary Clinton was expected to win and railing against Trump might have seemed a temptingly low-risk proposition. He didn’t join world leaders, led by Germany’s Angela Merkel, who bluntly denounced Trump’s ban on travellers from seven majority-Muslim countries. “The last thing Canadians expect,” Trudeau said today at his joint White House press conference with Trump, “is for me to come down and lecture another country on how they choose to govern themselves.”

Every signal—especially Freeland’s declaration that Canada sees America through a bilateral lens—is that Trudeau was striving to accentuate the positive two-way relationship. There’s an obvious upside to trying not to allow Canada to be linked in Trump’s impulsive mind with other, potentially more problematic, international files. Indeed, pragmatists around Ottawa have been stressing that this would be the worst moment for the Canadian government to indulge in any multilateralist idealism.

And that’s likely good advice when it comes to the message Trudeau delivers directly to Trump. But it would be a mistake to assume that shoring up an advantageous bilateral relationship with the U.S., while letting multilateral institutions atrophy, is ever any Canadian government’s smartest strategic play. The best foreign and trade policy minds in Ottawa have for decades sought to counterbalance the inescapable importance of the U.S. to Canada by fostering forums where more countries are at the table.

MORE: How world leaders are using side-eye against Trump

The founding of NATO is a prime example. The alliance grew out of postwar fear of the Soviet threat and frustration with the United Nations not living up to expectations. Along with the U.S. and Britain, Canada was an early advocate. As the late diplomat Escott Reid wrote in his memoirs, Ottawa was betting that Canada’s clout in Washington would be amplified as part of a collective defence organization—given that the alternative was settling for junior-partner status in a bilateral military relationship with the U.S.

Even in cases where a strictly two-way deal seems to be working just fine, Canadian policy has preferred more players in the game. When the Canada-U.S. Free Trade Agreement came into force in 1989, Canada’s edge on access to the American market was clear. But when the U.S. began looking at a similar deal with Mexico, Canada scrambled to be at the table, and NAFTA was the result. “We fought very hard to be in NAFTA because we did not want a hub-and-spoke relationship with the United States,” says Queen’s University policy professor Robert Wolfe, an expert on the history of trade deals.

The sort of “hub-and-spoke” approach Wolfe warns of might be Trump’s preference. In that scenario, Canada, like every trading nation, would be more vulnerable to the whims of Washington’s protectionists. And that extends out in the post-Trump future. So Wolfe urges the Liberal government to keep investing patiently in the stalled World Trade Organization process, with all its frustrations, in hopes of an eventual breakthrough.

But building the bilateral relationship can continue while Canada invests patiently in multilateralism. “We’ve always done that,” Wolfe says, citing the 1965 Auto Pact as a Canada-U.S. deal made against the backdrop of deepening global trade rules. More recently, Wolfe adds, there was the 2011 creation of the Canada-United States Regulatory Cooperation Council, which tries to boost economic efficiency by aligning regulations on both sides of border.

That sort of sensible, serious—some might say stultifying—cooperation is deep enough in the bureaucratic weeds to survive even the most disruptive of U.S. presidencies. In the far brighter glare of media attention, Trudeau’s job is to personify uncomplicated bilateral amity. But a more subtle dynamic among multiple leaders is almost bound to emerge. Watch for signs of how Trump is fitting in—or not—when the Group of Seven presidents and prime ministers meet for their annual summit, this year hosted by the Italians in Taormina, Sicily, at the end of May.

John Kirton, a University of Toronto political science professor and expert on the G7 summits, points out that Trudeau’s father, Pierre Trudeau, happened to host the 1981 G7 summit at Montebello, Que., the first attended by then-U.S. president Ronald Reagan. According to Kirton, “a broad analogy applies” between ushering Reagan then, and Trump now, into the G7 fold—each “a brand-new, apparently far right-wing U.S. president, who really seemed so far outside of the mainstream of the American presidential norm.”

And, Kirton says, Pierre Trudeau and other G7 leaders were successful, up to a point, in finding ways to absorb Reagan into their club. Kirton sees potential for repeating that trick with Trump. Justin Trudeau, for instance, can connect with him on infrastructure spending, European leaders on coping with mass migrations. When it comes to developing personal rapports, Britain’s Theresa May and Japan’s Shinzo Abe, and perhaps Trudeau, have shown signs of progress.

So, if Trudeau’s visit with Trump today accentuated the bilateral elements of the Canada-U.S. relationship, the more important action may be yet to unfold on the multilateral level. The big question is whether Trump will gradually allow himself to be nudged into functioning more or less normally through NATO, the WTO, the G7, or lean harder on two-way relationships that he might think better suited to his deal-making self-image.

MORE: Advice for Trudeau from our Bush-era ambassador

The most candid old pros of diplomacy aren’t making any confident predictions. Jeremy Kinsman, a retired former ambassador to Italy and the European Union, says the classic Canadian approach with any new U.S. administration would be to find a way to be useful to a president finding his way in the world. Trudeau’s challenge, Kirton says, is to do that without sacrificing his own high standing. “The problem here is that Trudeau is being called one of the last liberal internationalists standing,” Kinsman says. “I find it difficult to see in what respect he’s going to be helpful [to Trump].”

Today, at least, Trudeau tried to be helpful just by continuing to swallow any comment that might hint at a criticism of his host. In the months ahead, though, he will have to find a way to keep the bilateral peace without forgetting Canada’s deep investment in the multilateral order.