Trudeau cautions that American political instability could mean 'some disruptions'

Politics Insider for Oct. 9: The PM comments on the presidential election south of the border, Ford Motors gets nearly $600 million in taxpayer money and Ben Harper has a new gig 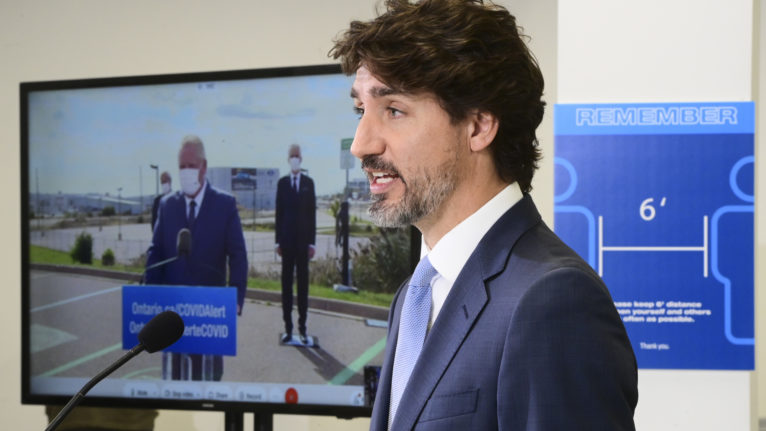 Here are some things Prime Minister Justin Trudeau said yesterday about political instability south of the border:  “We are certainly all hoping for a smooth transition or a clear result from the election, like many people around the world … If it is less clear, there may be some disruptions … We need to be ready for any outcomes … We are certainly reflecting on that.” Earlier this year, Foreign Minister François-Philippe Champagne announced sanctions against certain Belarusian officials after a fraudulent presidential election in that country—and a crackdown on protesters and journalists in its wake. For the moment, that unrest remains a non-sequitur.

Trudeau was at a Ford Motors facility in Ottawa, where he virtually joined Premier Doug Ford to announce both levels of government would spend $295 million on the automaker’s plan to build electric vehicles at its sprawling assembly plant in Oakville, Ont. “Rather than bickering and arguing with each other, when we’re all pulling in the same direction, this is the result we get,” said Ford. The politicians called the infusion an “investment,” as politicians do. Others might call it corporate welfare.

Meanwhile, NDP leader Jagmeet Singh rolled out his next big policy pitch: taxing the rich. Singh bemoaned “wealthy corporations making record profits because of the pandemic,” and called for a “1 per cent annual wealth tax to families with fortunes over $20 million.” The balance-of-power wielding Dipper subtweeted the uber-wealthy Weston family as he railed against grocery stores—see: Loblaws—whose revenue spiked this year.

It’s no secret that family dynasties have long been a thing in Canada. And finally, after years of waiting, a conservative prime minister’s son named Ben has take after his dad. No, we aren’t talking about the Mulroneys (though Brian’s daughter, Caroline, carried the family name into a legislature). This Ben is the eldest son of Stephen Harper—and he’s working for Premier Jason Kenney in Alberta. Jason Markusoff reports that young Ben has taken up a gig as a policy advisor.

The 24-year-old had in fact been quietly working in the Alberta legislature since June, briefly holding aide positions in the offices of Alberta’s finance minister and economic development minister before Kenney hired him to the premier’s team last month, spokeswoman Christine Myatt wrote in an email Thursday. Alberta’s government directory lists Harper as the junior of two policy advisors to Kenney.

The eagle-eyed Markusoff also noted a politically star-studded announcement today in Alberta. Kenney and three of his ministers (one of whom is coincidentally the son of a sitting MP!) will join federal minister Catherine McKenna and Canada Infrastructure Bank (CIB) chair Michael Sabia for a “major investment” in irrigation infrastructure. That’s the same CIB that Paul Wells concluded was “in no sense a bank anymore,” but instead a typical “pot of federal money” into which the government may dip at its pleasure.

The Parliamentary Budget Office released another report yesterday—that makes 10 just this week—on carbon pricing. Yves Giroux’s crew found the feds’ fight to curb emissions is on pace to fall 77 megatonnes short of its 2030 goal. The PBO gamed out two scenarios to cover that gap, and projected the impact of new measures on GDP in a decade. The verdict? GDP would be between -0.47 per cent and -0.62 per cent lower in 2030. The Canadian Taxpayers Federation screamed that kind of drop is the equivalent of taking $10 billion out of the economy. Then again, the national GDP will be well over $2 trillion by that time.

Broken Arrow: The National Post tracked down the man who’s spent years searching for the final resting place of legit Avro Arrow test models. John Burzynski, a mining exec with a side hustle as a Lake Ontario model-hunter, calls the artifacts the “holy grail“—the last-known remnants of the most famous Canadian aviation project ever to be abruptly cancelled. The nascent Cold War interceptor’s mystique has survived generations since John Diefenbaker axed its funding in 1959. Don’t be surprised if a pilgrimage of Arrow devotees gather to witness the eventual salvaging of the models.

Fact check: Vivian Bercovici, a former Canadian ambassador to Israel, tweeted a debunked rumour that sometimes circulates around Ottawa. The story goes that journalists at some point started submitting questions to the Prime Minister’s office in advance. Politicians’ comms staff do, on occasion, ask for questions before a press conference. Journalists do not oblige. Period.