Trudeau couldn't have prayed for a better distraction 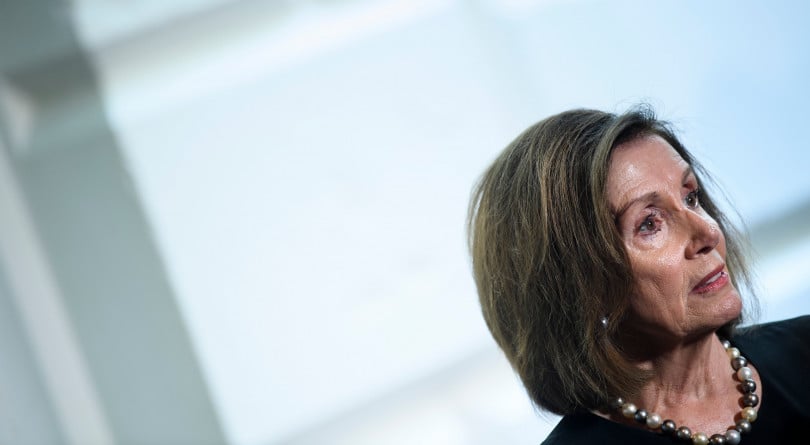 Speaker of the House Nancy Pelosi speaks to members of the press after a meeting with House Democrats on Capitol Hill September 25, 2019, in Washington, DC.(Photo by Brendan Smialowski/AFP/Getty Images)

If Justin Trudeau has been praying for something—anything⁠—to distract the public from his waning blackface scandal, he should be thanking Nancy Pelosi and Lady Hale like they’re gods. Between the British Supreme Court’s decision that Prime Minister Boris Johnson’s parliamentary prorogation was unlawful, and the impending U.S. impeachment inquiry against Donald Trump, Trudeau must be feeling pretty good that the biggest equivalent Canadian scandal right now barely dented his support.

Glavin gets results. After Maclean’s published an investigation by Terry Glavin into Waseem Ramli, a notorious Syrian supporter of dictator Bashar al-Assad who earned a quiet and quick appointment as “honorary consul” in Canada, Global Affairs Minister Chrystia Freeland tweeted a response:

Shocked by the comments made to the press by the Syrian Honorary Consul in Montreal and the views he has espoused publicly on social media and elsewhere. Neither my team nor I were aware that officials at Global Affairs Canada had approved this appointment. I have asked the Department to look into this right away.

Conservative leader Andrew Scheer called the appointment “outrageous,” while other ambassadors and Ottawa insiders expressed concern and confusion over the appointment of a man whose views blatantly contradict those of Canada and its government.

That mini-scandal (Ramligate, anyone?) won’t be brought up in the scheduled Munk Debate on Foreign Policy, however, because the Munk Debates organization axed the whole thing after Trudeau declined to appear. The Liberal leader has decided to only attend three debates: a nationally televised English-language one and two in French.

Greta gets results, too. Hours after teenage activist Greta Thunberg gave an impassioned, angry, accusatory speech at the United Nations climate summit this week, every left-leaning party Canadian leader invoked her name on the campaign trail. NDP leader Jagmeet Singh name-dropped her while firing off the bullet points of his party’s climate strategy (which includes creating 300,000 jobs in the clean-energy sector and making all homes energy efficient by 2050), while Trudeau one-upped Singh’s promise with a plan to make the entire country a net-zero carbon emitter by 2050. (In a real knife-twist move, Trudeau made the announcement in Singh’s own riding of Burnaby, B.C.)

Green leader Elizabeth May, meanwhile, speaking in Sackville, N.B., brushed aside Trudeau’s plan. “Is it preferable to (the plan of) Maxime Bernier? Oh yes,” she said. “Is it preferable to what Andrew Scheer has offered? You bet. But it’s not anywhere near what is required.” May’s plan involves more urgent work, drastically cutting emissions by 2030 while ending all fossil fuel subsidies to build a zero-carbon economy by 2050.

To clarify: “Zero carbon” means zero emissions being created, e.g. by making all cars electric. “Net-zero,” which is Trudeau’s plan, would offset any carbon emissions with environmentally friendly strategies such as planting trees.

May’s plan is obviously the boldest of the bunch, but to enact it, she’ll have to win voters over. And so long as her campaign keeps bungling simple tasks like not needlessly photoshopping images after they’ve been published, such a victory seems like a stretch.

Meanwhile, in Toryland. Scheer promised to reverse a controversial tax system created by the Liberals in 2017, which he says hurt small businesses. The Tory plan would nix 34,000 regulations from a list of 136,121 current ones, hiring a Minister of Cutting Red Tape to do the job. Scheer cited the fraught world of kids opening lemonade stands as an example of ludicrous over-regulation that impedes entrepreneurship and ingenuity.

It remains to be seen whether this plan will go over any better than his housing announcement, which is earning mixed reviews from experts. Foremost among Scheer’s promises was to extend mortgage amortization rates from 25 to 30 years. Evan Siddall, president and CEO of the Canada Mortgage and Housing Corporation (CMHC), cannot take an official stance on political issues, but frankly stated his thoughts on longer amortizations earlier in the sunmmer: “If you extend amortization, you’re increasing demand and increasing debt,” Siddell said. “So, you know my answer: I think it’s dumb.”

However, Scheer’s plan included some positive notes, including eliminating the mortgage stress test for people renewing their mortgages and investigating money laundering in Canadian real estate.

Will somebody get the media a functioning bus already? The Liberals’ media bus broke down, literally spinning its wheels while reporters stood around and waited. It wasn’t the first time the bus has caused the party problems, either. Hard to put a good spin on that story.

Shame, shame, go away, come again another day. There’s a lot of finger-pointing going around this election cycle. Forget blackface for a moment, and move beyond Greta Thunberg’s cries of “How dare you!” to millions of viewers. In a quieter announcement, Hassan Guillet⁠—a prominent imam in Quebec who was running for the Liberals until they dropped him, after discovering he made controversial comments about Israel, Orthodox Jews and anti-Semites aligned with the terror group Hamas⁠—has decided to stay in the race, running instead as an independent, refusing to be shamed out of public life.

Meanwhile, Natan Obed, president of Inuit Tapiriit Kanatami, a national Inuit organization, is calling on federal leaders to specifically address the host of issues plaguing his people in 2019.

The question we should be asking now is this: how will our national parties and party leaders build on this national conversation by taking action to end systemic and structural racism in our country that underpin social and economic inequity?

For Inuit specifically, what policy changes and legislation will each party advance to ensure Inuit can access federal services in our own language, and enjoy the basic services and infrastructure that most Canadians take for granted?

To get an answer, the public will have to point a lot more fingers at our leaders. As David Moscrop writes in Maclean’s, public shaming is a necessary part of democracy.

Shame plays an important and complicated role in democratic life. As the tactic of bullies, it oppresses. As the weapon of the marginalized, it empowers people to push back against those in positions of power who fail to represent them or the public interest. In the streets, cries of shame are calls to do better. In legislatures, the same shouts are part of a representative’s toolkit—as when members of the U.K. House of Commons shouted “Shame, shame!” at Prime Minister Boris Johnson as he (unlawfully) prorogued Parliament.

Politicians who feel no shame are dangerous. They’re potential threats to democracy and the rule of law. An American president who admits no shame might mock a teenage activist who stands bravely in front of the world to demand better from a political class that has failed us time and time again.