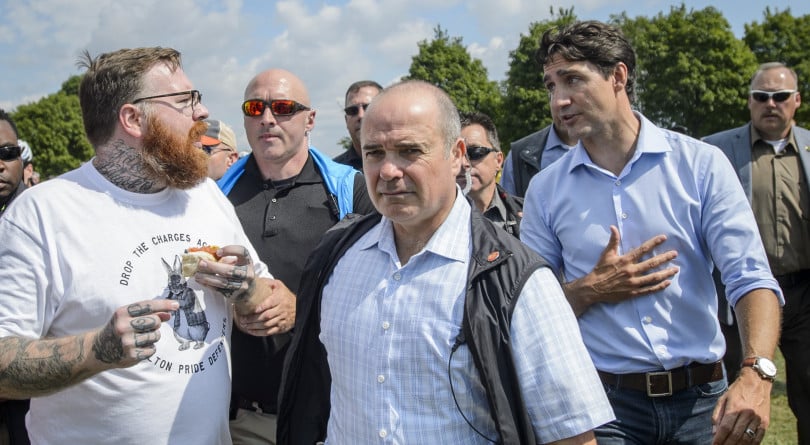 A protester yells at Prime Minister Justin Trudeau during a BBQ after the labour day parade in Hamilton, Ont., on Monday, September 2, 2019. (Andrew Lahodynskyj/CP)

Hammer time: There’s really no other place for an aspiring prime minister to be on Labour Day than the union heartland of Hamilton, Ont., and so the three main party leaders brought their unofficial campaigns to steel city Monday. Andrew Scheer joined former Hamilton Tiger-cat Peter Dyakowski, running as a Conservative in one of the city’s five federal ridings, to watch the team beat the Toronto Argonauts. Jagmeet Singh, having pledged earlier in the day in Toronto to bring in legislation blocking companies from replacing striking workers with temporary ones, headed for the city’s annual Labour Day picnic. (Canadian Press)

As for Justin Trudeau, his effort at displaying worker solidarity hit a snag. While marching with a local chapter of the Labourers International Union of North America, he ran into a group of protesters with a different view of his labour bonafides chanting, “Justin Trudeau, Andrew Scheer, same old b——t, different year.” After being held up for more than half an hour Trudeau skedaddled and rejoined the group a couple blocks later. (Hamilton Spectator)

Look out below: The latest 338Canada poll projection is looking seriously grim for Singh. While the Liberals have climbed to an average of 165 seats, just five short of majority, the NDP slipped further behind. As 338’s Philippe J. Fournier writes:

Poor numbers for the NDP have been piling on lately and one wonders where this could lead the party. … In the best case scenario according to current figures, the NDP would barely win more than half of its 2015 seat total.

The worst case scenario? Barely a handful of seats. (Maclean’s)

No deal: In contrast to Elizabeth May‘s Green Party, Singh last week ruled out the idea of the NDP propping up a minority Conservative government, no ifs, ands or buts. Tom Parkin writes that it was the right decision for Singh to take and will strengthen his hand:

The threat to walk down the hall and cut a deal with the Conservatives is a bluff—and everyone at the table knows it. When everyone knows it, there is no leverage. So Singh has turned it down.

Probably nothing unifies social democrats more than antipathy toward Conservatives. Scheer’s party wants to pull-down everything Singh’s social democrats want to build up. But it’s more than that. It’s personal. Scheer threatens to hurt the people who are part of the social democratic electoral coalition. Singh’s no-deal stance makes him the unambiguous defender and unifier of that coalition. And that clear anti-Scheer position contrasts well. (Maclean’s)

Meanwhile Singh praised his brother, Brampton East MPP Gurratan Singh, for his response to a far-right protestor who confronted him at Mississauga, Ont.’s MuslimFest over the weekend and demanded he declare his views on Shariah law and “political Islam.” Like the elder Singh has in the past, the Ontario politician refused to counter that he is indeed Sikh and not Muslim, and instead responded that “We don’t need that kind of racism in Canada.” (CBC News)

Dating game: We’re in the final stretch of the unofficial campaign before Trudeau advises the Governor General to dissolve Parliament and things get real, something he has until Sept. 15 to do. The CBC takes a look at the history of gaming the writ, and notes two factors favouring a Sunday Sept. 14 writ-drop: Manitoba is caught up in a provincial election campaign that doesn’t wrap up until Sept. 10 and past prime ministers’ visits to the GG have often (though not always) fallen on a Sunday. (CBC News)

But think of those carrots!: Who could look at the biggest ecological and humanitarian disaster in history and get excited for the economic opportunities? Former Conservative finance minister Joe Oliver, for one. Oliver is giddy at the prospect of climate change extending the Canadian growing season, as projected in a report by Moody’s Analytics that sorted countries as likely winners and losers of climate change based on economic models. Even putting aside the significant sums of money Oliver has received from energy industry opponents of carbon pricing, Stephen Maher writes that Oliver’s position is thin:

For one thing, he is seizing on a single report, which relies on the kind of computer modelling that he pooh poohs when he disagrees with the conclusions. And the Moodys report doesn’t factor in the impact of increased fires, flooding, coastal erosion and other climatic horrors. Consider that the Fort McMurray fire alone cost an estimated $10 billion. This year’s fires have so far burnt almost 900,000 hectares in Alberta—one and a half PEIs.

Scientists believe climate change is making those fires worse, but they would find it hard, no doubt, to convince Oliver of that. (Maclean’s)

Yes, he went there: While we’re on the subject, Oliver’s former cabinet colleague Maxime Bernier is taking a different approach to opposing efforts at combating climate change: cyberbullying a teenage girl. After attacking 16-year-old Swedish activist Greta Thunberg as “mentally unstable” over the weekend, the People’s Party of Canada leader followed up yesterday with a barrage of unhinged tweets completely unworthy of repeating (though they’re here if you really really need to read them). It is worth remembering at a time like this that the “people’s” candidate is unable to garner even three per cent of voter support. (Global News)