Justin Trudeau in the ring

John Geddes on boxing night in Ottawa: Brazeau came out swinging for a knockout. Trudeau was patient. 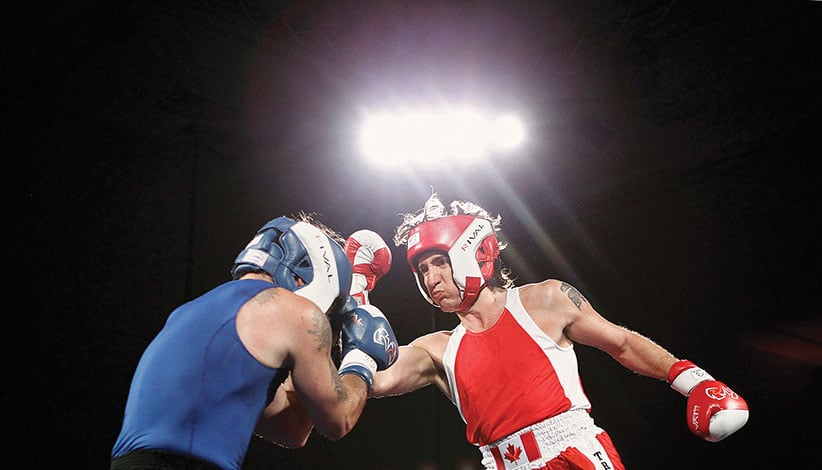 Many years ago I had the pleasure of interviewing Morley Callaghan. After I asked him about the famous account in his memoir That Summer in Paris of the day he boxed Ernest Hemingway, with F. Scott Fitzgerald as referee, Callaghan said he thought boxing was pretty much drained of juice as far as storytelling went. “The up-and-coming pug, the washed-up pug,” the old literary pro told me wearily. “They’ve all been done.”

With the greatest of respect to Callaghan’s memory, not quite. How about this outline for novelty? The son of a prime minister agrees to fight a senator. The kid’s not so brawny, but this senator is a beefy aboriginal guy. The kid grew up in comfort, but the senator has a kind of hard-knocks aura about him. Many figure that given the kid’s pampered upbringing and penchant for publicity, it wouldn’t be so bad to see him beat up a bit. But then this senator yaps crudely about how much he wants to hurt his opponent, and you can feel the sentiment begin to shift.

By the time we assembled in the ballroom of the Hampton Inn, out near Ottawa’s train station and minor-league baseball stadium, Justin Trudeau, Montréal MP and son of the late Pierre Elliott Trudeau, had a respectable slice of the crowd behind him. Still, Senator Patrick Brazeau, from the sounds of the cheers when their faces appeared on the big screens, remained the audience favourite. Brazeau came out swinging for a knockout in the first round. Trudeau looked scared. He clung to his composure, however, and settled in to win the second, by general assent, on points. In the third and final round, Trudeau took control, and his fans, both the resolute and the grudging, went wild. Brazeau  lost when the referee declared a technical knock out.

The real emotion generated by a novelty charity bout ($230,00 raised for the Ottawa Regional Cancer Foundation) was something to behold and to experience. Brazeau was expected to win because he has a military background and martial arts training and big biceps. Trudeau had only his unusual upbringing to recommend him. Here’s what he told me in February when I asked him about it for a Maclean’s interview (part of this was published in the magazine, but I figure it’s of enough interest to give you the full quote now):

“We actually weigh pretty much the same. My reach is significantly larger than his. The way things have been set up is everybody is convinced that this black belt in karate with massive arms is going to clean up the pretty boy, because he grew up in the mean streets of Maniwaki and I grew up with a silver spoon in my mouth, you know? That’s what everyone says, right? So as it stands I can’t lose. Even if I do actually lose I know I will have gone in and people said, ‘Well, there wasn’t a chance anyway.’

“Neither of us have ever actually been in a boxing match before. I’ve trained in boxing all my life, my dad taught me how to box early, and through my twenties I trained at various sorts of rough gyms in Montreal, mostly as just a way of keeping in shape. I even boxed out in Vancouver for a while. But I never stepped it up to full-on sparring, or even a real bout. Pat’s been talking quite openly about the fact that he plans on taking me down early. I expect him to come in very hard, very fast. I plan on allowing him to, because I can take a lot, and use my jab to try and keep him at a distance, and out-think him.”

So Trudeau had it figured from every angle. He accurately predicted that Brazeau would come out trying to flatten him, and that’s sure how it transpired. He plotted out using his jab and reach advantage, and that’s what kept him in it after the early rough going. He didn’t predict that he would rally late and rock the patronage appointee to the point where the bout would have to be stopped early. More tellingly, though, Trudeau shrewdly read the psychology of the fight perfectly, seeing how his “pretty boy” rep and “silver spoon” upbringing actually worked to his advantage. It took the pressure off: all he had to do was survive.

All Ottawa is talking about the fight. Journalists were only half joking when they spoke of Trudeau’s path to the Liberal leadership beginning at the Hampton Inn. This is of course absurd. But then Morley Callaghan’s story about sparring with Hemingway teaches how boxing, especially between amateurs, is absurd at its core, and yet no less dramatic for that. Two skilled wordsmiths punch it out, a third acting as ref. Ridiculous. Then Hemingway, the self-styled tough guy, is so mad at being cut by Callaghan, the technically superior boxer, that he spits blood in his face. “And in spite of the fact that Ernest had spat blood on my face, I felt closer to him than ever,” Callaghan wrote.

That’s a crazy reaction, obviously. Boxing has an enduring way of making people think and talk nonsense. (I’m a bit susceptible: I blame it on listening, as a 9-year-old and after bedtime, to Muhammed Ali beat Jerry Quarry in three rounds on a radio my brother and I turned on low in our darkened room so our parents wouldn’t hear that we were still up.)

I started out suggesting Callaghan was wrong to suppose there were no new boxing stories, that the Trudeau-Brazeau fight proved a fight yarn can still feel fresh. Now that I think about it, I have to revise that. It wasn’t any new element that made it resonate. The underdog triumphed, as in countless variations. The boxer beat the puncher, as the old maxim teaches. Out of the dumbest sort of contest ever devised, a lesson about character, improbably and absurdly, once more shone through.