Trudeau invited 44 people to accompany him to Washington 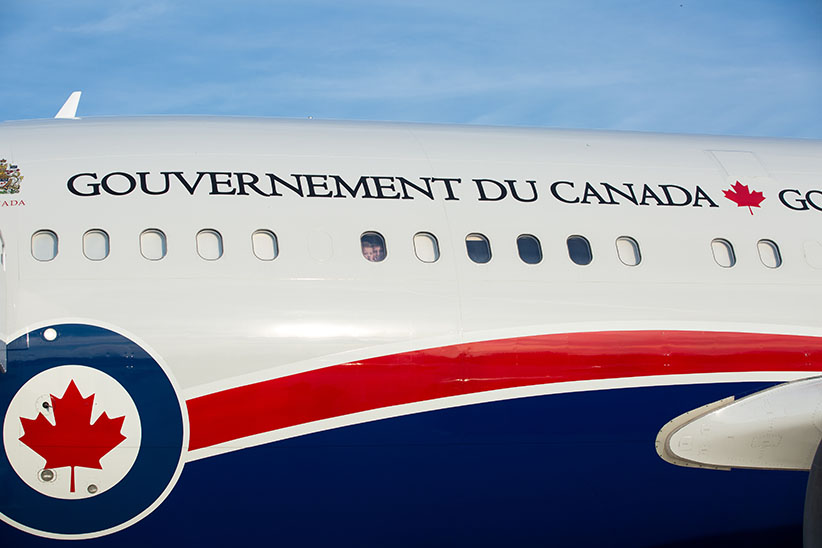 Xavier and Hadrien look out of RCAF01 on arrival to Andrews Air Force Base just outside of Washington, D.C. March 9, 2016.

OTTAWA — Justin Trudeau took a small army of 44 people with him for a three-day visit to Washington last March, at a cost of more than $25,000.

The size and preliminary cost of the delegation invited to accompany the prime minister on his first visit to the U.S. capital has been disclosed in a document tabled in the House of Commons.

It’s not clear whether the delegation included one of two taxpayer-funded nannies employed by Trudeau and his wife, Sophie Gregoire-Trudeau, to help look after their three young children.

The kids accompanied their parents on the trip and were filmed playing on the White House lawn, with a nanny at one point chasing after the youngest, Hadrien.

A separate document also tabled in the Commons shows that two caregivers, employed as part of the staff at the prime minister’s residence, were paid a combined salary of $30,850 over the first three months of Trudeau’s term in the top job.

That does not include the cost of foreign or domestic travel for either of the nannies, one of whom was spotted during a prime ministerial trip to Paris last year.

A spokesman for the Prime Minister’s Office said such travel costs for the nannies would come out of the Global Affairs Department’s “international conference allotment.”

The two documents were tabled Thursday in response to written questions by Conservative MP Blaine Calkins about the cost and size of the Washington delegation and the cost of employing the nannies.

Trudeau’s much ballyhooed Washington visit included a private tete-a-tete with President Barack Obama and a lavish, glamorous state dinner at the White House.

The document about the Washington trip pegs the total cost for all 44 persons on the trip at $25,995, including $6,755 for accommodations and $5,000 for meals and per diems. But it notes that not all invoices and claims for that trip have yet been processed.

The document on the nannies says that the caregivers are paid salaries in the range of $15 to $20 per hour for work during the day and $11 to $13 per hour for night shifts. They are not entitled to overtime.

They are, however, entitled to three weeks of paid vacation each year and are eligible for coverage under the public service health care, dental care and pension plans.

News that Trudeau had put two nannies on the public payroll last November sparked some controversy. The PMO said at the time that Trudeau would not increase the overall household staff at the prime minister’s residence but was making adjustments to the staff complement to suit his young family’s needs.

Read more of our coverage from Trudeau’s official visit here.