Trudeau needs to be this election's big man on campus

John Geddes: High turnout among young voters helped Trudeau mightily in 2015 and he is bidding to recapture some of that magic in this fall's campaign 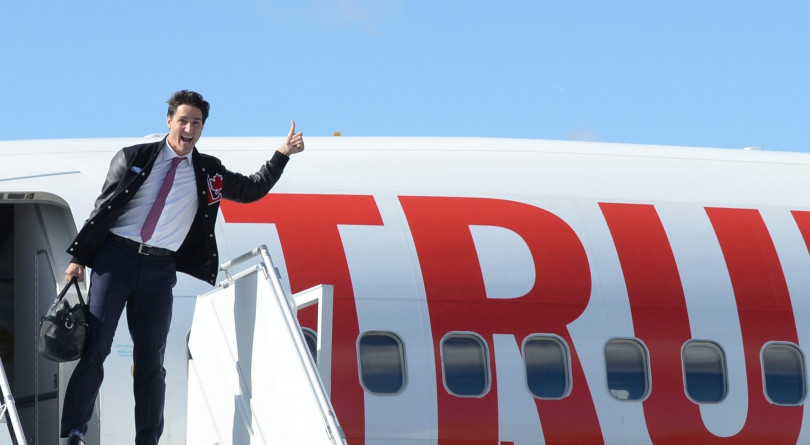 Trudeau boards his campaign plane in Ottawa on Sept. 29, 2019 (THE CANADIAN PRESS/Ryan Remiorz)

Justin Trudeau couldn’t have chosen a more clearly strategic and symbolic place to be for today’s release of the Liberal party’s full 2019 campaign platform than a suburban campus—University of Toronto’s in Mississauga—as his party also rolled out promises of financial help for students and recent graduates.

There is no missing the fact that Trudeau must place high priority on reigniting some his 2015 campaign’s magic among younger voters, especially in the crucial Toronto and Vancouver ‘burbs, which was such a key factor in driving turnout way, way up back in his first race as Liberal leader. But it’s a trick the Prime Minister could be hard pressed to repeat.

Even before this fall’s federal race was rocked by the revelation that Trudeau didn’t see anything wrong with darkening his skin to dress up as Aladdin when he was a 29-year-old teacher, the question of whether he could again inspire high participation this Oct. 21 across all age groups—but especially millennial voters—was one of this election’s critical strategic questions.

Digging a little deeper into Statistics Canada data, turnout in 2015 was highest among young people who had recently completed their degrees—exactly those likeliest to be struggling to repay those loans. Among Canadians aged 25-34, the voting rate of those who had finished university was a yawning 42 percentage points higher than those who hadn’t completed high school.

Those numbers add some context to Trudeau’s concerted pitch in the 2019 Liberal platform, released in full today, to win over financially strapped university and college students—and their parents. They package together four related policies.

The most straightforward is to increase what’s available under Canada Student Grants, which students don’t have to pay back. In 2016, the Liberals boosted the grans by 50 per cent and changed the rules to allow more part-time students to qualify for the grants.

READ MORE: Trudeau couldn’t have prayed for a better distraction

That gave students up to $1,000 more. Now, the Liberals are promising another 40 per cent boost to the grants program, which they say would give students up to another $1,200. The most a student can qualify for would rise to $4,200 as of next year, according to the platform. The Liberals estimate 470,000 low- and middle-income students will qualify.

The other three measures all have to do with how students repay loans. The Liberals promise to let individuals put off starting to repay student debt until they are making at least $35,000 a year, and wait two years before they begin paying off loans (up from the current six-month grace period). As well, former students who are new parents will be allowed to wait until their youngest child turns five before they have to start paying back loans or have interest begin piling up.

It can be tempting to overstate the singular importance of the youth vote to Trudeau’s prospects of winning this fall.  Yes, about 550,000 more voters aged 18-24 turned out at the polls in 2015 than in 2011, when Stephen Harper’s Tories won with a majority. But, to put that rise in perspective, the total Liberal vote climbed by a staggering 4.2 million in 2015 over 2011.

“Even though they did very well with millennials, that was part of a multifaceted late movement [among voters], that included equally important movements of Quebecers, new Canadians, and seniors,” explains veteran pollster Frank Graves, president of Ottawa-based EKOS Research. “The millennials were extremely helpful, and without them they might not have won, but they weren’t sufficient. It was only one of the keys to victory.”

Still, the youth vote is getting special attention. One reason is that it can be worryingly fickle, and Liberals have to be concerned about it falling off. In the U.S., Hillary Clinton got 55 per cent of the millennial vote in 2016, to Donald Trump’s 37 per cent, a big margin but still a damaging drop for the Democrat candidate from Barack Obama’s 60 per cent in 2012.

Even before the surfacing of old blackface photos and videos took their toll on Trudeau’s progressive image, Graves says the Liberals weren’t enjoying certain advantages that helped them in their last campaign. In particular, he points to the absence of an opponent who energizes progressive voters the way Harper did after nearly a decade heading “at least a rhetorically hard-right government.”

Arguably Harper’s most controversial positions in the 2015 election included banning the wearing of face veils, including those worn by some conservative Muslim women, and setting up a so-called “barbaric cultural practices tip line” to the RCMP. Those contentious policies seem to have been at least partly behind some key turnout rises in 2015, including the remarkable 22 percentage point jump in voting among recent immigrants from West Central Asia and the Middle East.

As a result, Moe Ladha, chairman of non-partisan group Canadian-Muslim Vote, which works to boost turnout among Muslims no matter what party they support, says the atmosphere for Muslims 2015 wasn’t exactly uplifting. “The silver lining, I hope, is that people understood the importance of participation, and we’re working to try to make sure they participate again,” Ladha says.

His group estimated voter turnout in the Muslim community jumped to about 79 per cent, and about 10 points higher than that in ridings where his group was working to get out the vote through door-knocking and other concerted efforts.

Jakob Sanderson, president of the University of Manitoba Students’ Union, says he’s optimistic the high 2015 youth turnout can be repeated even with the very different dynamic of the 2019 campaign. “Every student we talk to either already thinks they are going to vote or is very excited to get information and find out how,” he says. “For the first time, the millennial generation is going to be the largest voting bloc.”

The massive participation of students across Canada on a few days ago for the “Climate Strike Day” marches, rallies and concerts tended to reinforce the assumption that young voters are primarily engaged by issues championed by progressive parties. “I think that type of narrative falls into the trap that political parties have fallen into for a long time—to assume that the youth vote is not a critical vote, not one that has a broad diversity of opinions,” Sanderson says. “We need to stop treating students and youth voters as this homogenous group.”

Still, there’s an urgency behind the climate change debate this time around that makes it hard to imagine Conservative Leader Andrew Scheer attracting much youth interest with his promise to get rid of the Liberals’ carbon tax, and substitute a proposal to require companies to invest in green technology, if their greenhouse gas emission exceed unspecified levels.

Sanderson is scrupulously non-partisan in all his comments about getting out the vote, but even he frames the need for young people to go to the polls, given the climate crisis, this way: “I don’t think we have a choice anymore. I think that the stakes are too high. We’re at a time where we’re at an inflection point for where we’re going to be as a society going forward.”