Paul Wells: Hooking Trans Mountain up to the taxpayer hose is not the same as providing generalized investor confidence 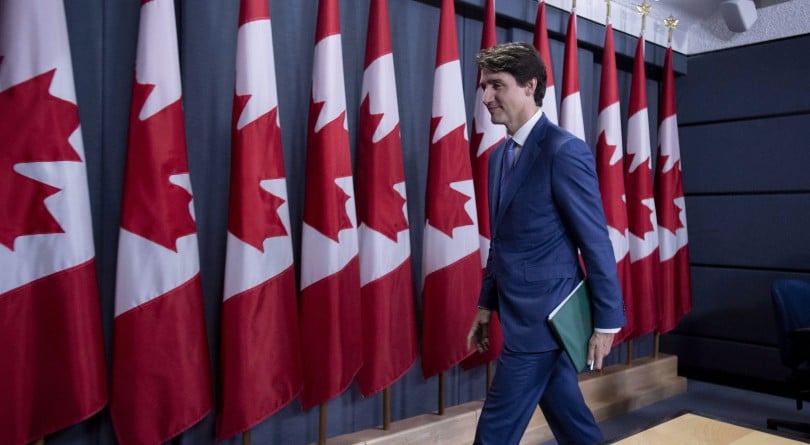 It was…. Well, it was a meeting about this great country, is what it was.

“We confirmed the many values that we share,” her British Columbia counterpart John Horgan said, “and our common view of Canada as a dynamic and diverse country with many components all working together…”

Yeah, we get it. Thanks.

“There are times in the life of a country when we come together in common purpose for the good of the country,” the prime minister told reporters after a scheduled 35-minute meeting with his two westernmost provincial colleagues stretched to nearly two hours.

“For months now we have worked hard with the governments of British Columbia and Alberta to help them chart a path forward together on the Trans Mountain pipeline expansion project.” And it’s going great, isn’t it?

“Canada has completed the deepest consultations with rights holders ever on a major project in this country,” Trudeau said. Sure, but what about Indigenous partners? “Working with our Indigenous partners has been paramount. To date 43 First Nations have negotiated benefit agreements with the project, 33 of those in British Columbia.”

The optimism exploding from every pore of the assembled first ministers was something to behold. And if truth be told, at times it strained credulity. “BCers don’t want to block Alberta’s resources,” Trudeau said.

“They want to know that the coast is protected and for too long it wasn’t. Now it will be.”

As for Albertans, “You won’t find more passionate defenders of conservation and the environment,” Trudeau said. “They wouldn’t dream of putting it in jeopardy.”

Ah, so everyone agrees on the fundamentals. Right?

Wrong. “Even as we continue to work hard with Premiers Notley and Horgan to find solutions, we must recognize they remain at an impasse which only the government of Canada has the capacity and the authority to resolve,” Trudeau said.

Notley was, characteristically, the least coy about the depth of this impasse. “I think that for the most part what we’ve been seeing from the government of B.C. has been a very considered attempt to create uncertainty by coming up with creative areas in which to inject a certain amount of legal debate,” she said. “I don’t believe it’s in the best interests of the country to engage in esoteric jurisdictional debate for the purposes of harassing a project to death, which is in effect I think is what has been happening up to this point.”

Horgan was the hardest to pin down on the exact nature of the impasse. The BC premier, a rugby player in a previous life, is built like a major appliance and I saw some Twitter traffic after yesterday’s cascading press availabilities to the effect that the big man rode into Ottawa and squished teeny Trudeau and obstreperous Notley like so many teensy gnats. What’s closer to the truth is that he energetically blew sunshine up everyone’s tailpipe before skipping town and talking tough on the aforementioned Twitter. “The interests of British Columbians — and all Canadians — should come before those in Texas boardrooms,” he told the vast cloud of electrons, once safely distant from Parliament Hill. “I will continue to fight to defend BC jobs, our economy and environment – now, and for future generations.”

So despite the triangular show of unity, the three first ministers are in fact asymmetrical and to some degree antagonistic in their deployment. Horgan is, of course, the odd man out.

Notley wants a pipeline, Trudeau wants a pipeline. Completing the Trans Mountain expansion is necessary, though probably not sufficient, to her political survival. Completing Trans Mountain is, to some extent, counterproductive to his political health — the federal Liberals have way more seats to lose in BC than any they can gain, or even hold, in Alberta — but on this file Trudeau has decided to be true to his word, and his word has always included the belief that Alberta bitumen should find ways to market.

Horgan has either the weakest or the strongest tactical position, depending how you count it. Strongest because he doesn’t need to get the pipeline expansion built, nor even to prove conclusively that it mustn’t be built. He needs to delay until the project stops making sense. Sunday’s crisis meeting was evidence that he has come quite close to succeeding.

Horgan’s stance is weakest, on the other hand, because he is not actually in charge of much. As he admitted at his news conference, he can’t deliver social peace: even if he were to rally to the Trans Mountain expansion, he can’t ensure that communities along the line rally with him. And he has zero political manoeuvring room because he is in a razor-thin minority government propped up by a Green Party junior partner who could never countenance a deal on pipelines. Meeting with Horgan assumes a level of human agency that actually isn’t his. As though Trudeau and Notley had stumbled across a bank robbery and started negotiating with one of the hostages. He’s not who you need to persuade, guys.

So they’ll persuade someone theoretically more amenable, the management of Kinder Morgan. Bill Morneau has already begun shuttling between Ottawa and Calgary, with Houston perhaps soon on his flight list, to figure out some way to backstop Trans Mountain with a combination of federal and Alberta aid and credit. The goal is to ensure that further delays don’t put Kinder Morgan off the project altogether. But although Trudeau and Notley energetically resisted this line of argument from me and other reporters, I still can’t help wondering about the signal it sends to other potential investors.

Risk is part of any investment. Investment flourishes where risk is generally low. It is unlikely to flourish where risk is generally high but a particular confluence of political interests can haul deep pockets of taxpayer money in Ottawa and a provincial capital into play. I’m not blaming Notley and Trudeau for the path they’re embarking on. They weren’t busting out with choices. But hooking Trans Mountain up to the taxpayer hose is not the same as providing generalized investor confidence.

And increasingly, this is the way things are going in Canada. Let me close with an odd but, I think, appropriate detour.

Within days, work will begin on the REM, an ambitious regional rail network around Montreal. It’s funded by the province’s public-sector pension fund, the so-called Caisse de Dépôt, the provincial government — and the federal government, which promised a year ago to pay for part of the REM if it didn’t manage to attract international investment through the new Canada Infrastructure Bank.

The Bank was the brainchild of an advisory panel that included Michael Sabia, the head of the… Caisse de Dépôt. Sabia used to wax lyrical about the vast pools of global investor money eager to pay for projects like his rail network. He talked the feds into setting up the Bank, he talked Trudeau into back-stopping his rail network, and now that it’s time to start building the rail network, it’s no skin off Sabia’s nose that the Bank isn’t ready to start pitching investors. We’ll just pay for it the old-fashioned way, with tax dollars.

It’s the way things get done in Canada. That’s not the heart of the Trans Mountain saga, it’s just a kind of bonus.