Justin Trudeau pitches spending and deficits. And a side of honesty.

With the hope of balancing the budget by 2019, no one can accuse the Liberal campaign of taking the easy way out 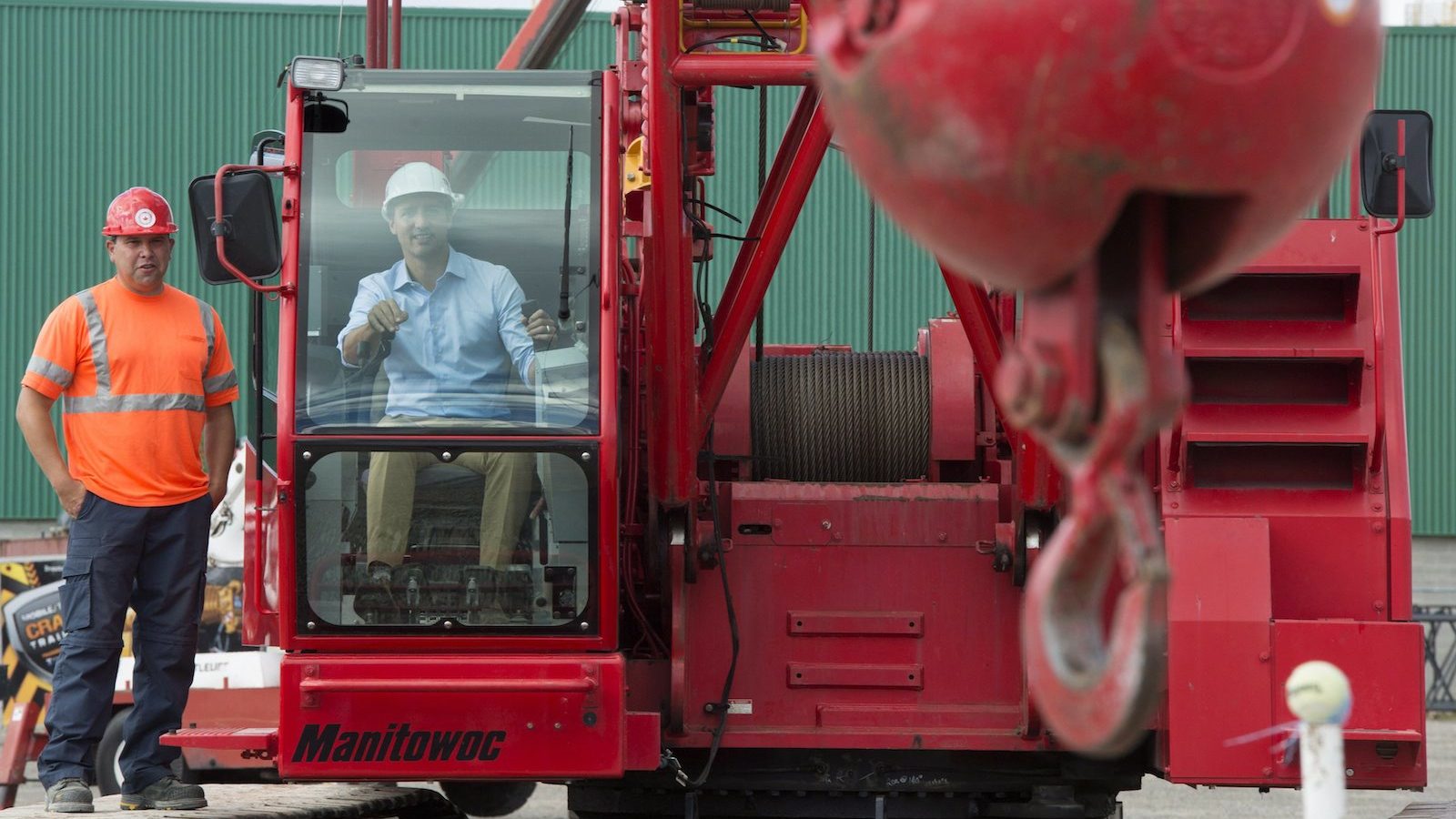 Campaign stops tend to come with hokey imagery. So it was with the props waiting for Justin Trudeau before he announced a plan to spend almost $125 billion on infrastructure over the next decade. The Liberal leader arrived at a training campus for operating engineers in Oakville, Ont., and he was operating a crane seconds after he jumped off his bus. Then he ambled over to a podium, pitched his plan on live television, and announced his intention to run budget deficits until 2019. That last bit is a major gamble as his opponents preach balance.

The trick with billion-dollar campaign promises is they have to look like something that appeals to a voter. Otherwise, they’re just a digit followed by a lot of zeroes without the immediate appeal of tax cuts or child care cheques. And promises of deficits to come, after the country has spent most of a decade in the red, are as politically risky as they are upfront. The Liberal plan forecasts two straight deficits of less than $10 billion, and a balanced budget only by the end of the next government’s mandate. Kevin Milligan measured the merits of Trudeau’s approach, but winning over the economist set doesn’t always translate into votes. This morning, as Trudeau dropped in on a must-win suburban riding, no one could accuse his campaign of taking the easy way out.

All of this comes in the wake of a new poll that claims 40 per cent of voters, a mystical number that always triggers chatter about “majority territory,” support Thomas Mulcair’s NDP. The bearded frontrunner, fresh off a promise never to run a deficit—a pledge that could be foolhardy—was today celebrating the office opening of a star candidate in Toronto, who, in his last political life, successfully balanced Saskatchewan’s budget. So how did Team Trudeau hope to turn this into a good news day? Easy. Make it all about honest recovery, slow and steady.

Adam Vaughan, the Liberal MP in Trinity-Spadina and candidate in Spadina-Fort York who helped craft the party infrastructure policy, says the Liberals won’t over-promise and under-deliver. He dissed Mulcair’s campaign for promising the moon without a proper costing. “[Mulcair] thinks that slogans, which may seduce you, are a form of governance,” said Vaughan. “Slogans are not policy, and balancing the budget isn’t done just because you say you’re going to do it. We’ve gotta have a methodical plan to solve these problems. Justin Trudeau’s being honest about it.”

Vaughan warned against promising balanced budgets prematurely. “If you try to walk out of a deficit too quickly, the damage you do structurally, to both the budget federally and the economy nationally, could be absolutely catastrophic,” he said.

Related: What economists think about when politicians promise infrastructure spending

Liberals are betting that infrastructure spending stimulates the sort of economic growth that pushes Canada back into surplus. (Trudeau got in trouble when he made a similar point about growth fuelling surpluses in early 2014. Back then, his opponents cherry-picked the quote and turned the apparent “budgets balance themselves” gaffe into parliamentary attacks ad nauseum.)

The kind of spending proposed today doesn’t compare to Conservative stimulus spending in the wake of the Great Recession, Trudeau said. But the program would dovetail with existing programs trumpeted by Conservatives as record-setting in their own right.

Few voters would quibble with the goal of economic growth. Many might be supportive of stimulus as a means to that end. But at the doorstep, how do local candidates turn it into an election issue? Vaughan, who’s running nowhere near Oakville, but calls it “critical” to his party’s fortunes, gave the local pitch a whirl.

“You’ve got a mayor who’s trying to grow this city responsibly, and expand his tax base, and protect the commercial tax base while he adds a residential tax base. You can’t do that without infrastructure dollars. There are a lot of communities in the GTA that lack the water infrastructure to add new subdivisions. At the same time, they lack the transportation infrastructure to attract new industry. If you don’t have a balanced approach that does both, you end up in a very difficult spot,” said Vaughan.

“One of the other components is that downtown Oakville is old,” he continued. “As you add the growth on the outside, you’ve got aging infrastructure downtown that has to be sustained. If you have to jack your taxes up to repair old infrastructure, your taxes will be too high to attract new investment. That’s why a balanced, methodical approach is needed.”

Phew. That’s a lot of policy for an evening canvass. But it’s emblematic of today’s Liberal campaign: Steer clear of slogans and get into the details. Maybe the next poll shows a few more people listened closely, and maybe they even bought the honesty bit. Maybe they even appreciated that the Liberal leader can operate a crane.