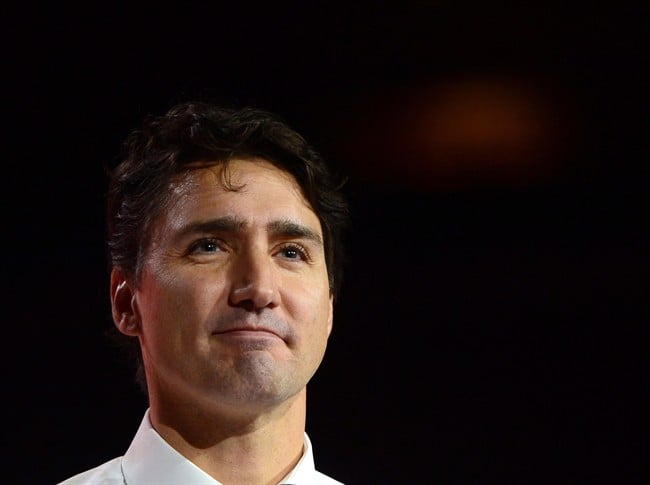 Trudeau said he plans to work with Donald Trump on shared interests, but missing from the list of interests was mention of climate change or the environment.

Trump has called global warming a hoax and vowed to “cancel” the Paris climate accord.

The president-elect’s platform commitments to roll back environmental programs and corporate taxes and take a hard stance on trade to reduce the cost of doing business in the United States could force the Liberals to rethink their own agenda, including a promised carbon pricing scheme that the Opposition Conservatives argue would drive up the cost of goods and doing business in Canada.

Trump’s views pose a challenge to Trudeau, who has argued for more than a year that the economy and environment can go hand-in-hand.

The Liberals remained silent Wednesday on the future of the economic plan as the government came under pressure react to developments south of the border.

Warren Everson, vice-president of policy at the Canadian Chamber of Commerce, said Trudeau and his team must craft an environmental policy that acknowledges the new path in the United States.

“If the Americans say, ‘we’re not playing’ … then it will be difficult to keep a political constituency going in Canada in the way that we previously had thought it would happen,” Everson said. “There would need to be a new tactic as to how the climate process is going to work.”

Cameron Fenton, Canadian strategy manager with the environmental group 350.org, called on Trudeau to “take bolder climate action than ever before.” Catherine Abreu, executive director of the Climate Action Network Canada, said governments need to stay the course on cutting climate pollution: “The economic imperative to get off fossil fuels is clearer than ever. The world knows that a prosperous future is one run on clean energy.”

The Liberals announced last month that Ottawa will impose a floor price on carbon dioxide emissions starting in 2018 if provinces don’t adopt a direct carbon tax, or a cap-and-trade market that prices emissions. For provinces that fail to act, the national floor price will start at $10 per tonne of emissions and rise $10 annually until reaching $50 per tonne in 2022.

“We will not be seeing a carbon tax in the U.S. any time soon,” Saskatchewan Premier Brad Wall said in a statement.

“It makes no sense for our federal government to push ahead with imposing a national carbon tax, when our biggest trading partner — and our biggest competitor for investment and jobs — is not going to have one.”

Notley said the possibility of a new north-south pipeline would be welcome news for oil producers.

Trump wants to see TransCanada’s Keystone XL pipeline built, but wants a bigger slice of the financial benefits to accrue to American companies. Interim Conservative leader Rona Ambrose urged Trudeau to push the project to Trump at his first opportunity and “make approval of this job-creating project a top priority.”

Notley said Keystone’s approval, should it happen, wouldn’t alleviate the need for an east-west pipeline to bypass the U.S., which has become more of a competitor and less of a consumer of Alberta oil.

Fenton said that Trudeau would be “complicit in Trump’s climate denial” if the Liberals approved a pipeline to the United States.