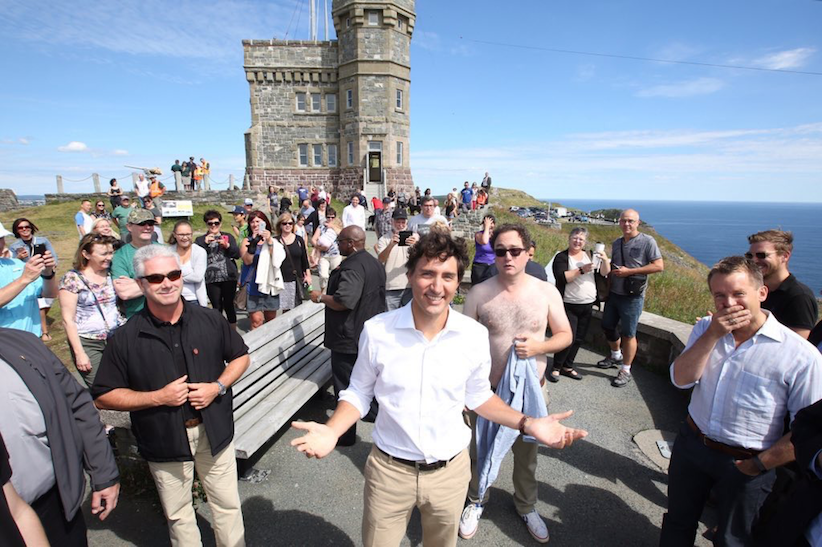 With media, fans and foes tracking shirtless Justin Trudeau sightings this summer, his scheduled appearance this morning in St. John’s was bound to draw attention.

However, the prime minister was probably not expecting it all to come to this.

In a photo posted to Twitter, comedian and This Hour Has 22 Minutes funnyman Mark Critch tweeted, “Sorry to accidentally photobomb your @CityofStJohns pic.”

The prime minister was most recently photographed shirtless while taking a break from surfing and simultaneously photobombing a couple getting married on a Tofino, B.C., beach. A Vancouver Island wedding photographer tweeted the photo of Trudeau on Saturday with his surf board standing several metres away from the bride.

A previous sighting of Canada’s shirtless prime minister gained international attention. The BBC and Time magazine reported on a Canadian family that encountered Trudeau while hiking in Quebec’s Gatineau Park last month and took a selfie with the prime minister, who was not wearing a shirt.

While a reaction from Trudeau was likely the goal, as CBC’s Jeremy Eaton pointed out on Twitter, it’s Seamus O’Regan, MP for St. John’s South – Mount Pearl who steals the shot.