With a week to go, the Liberals set their sights on Conservative strongholds 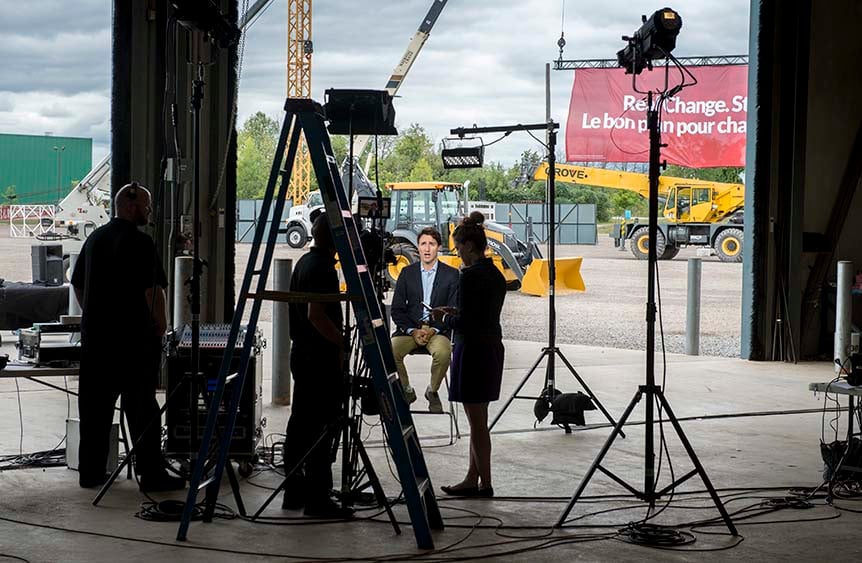 A week and a half before election day, Liberal Leader Justin Trudeau took his campaign to a place near and dear to Stephen Harper: Toronto’s Leaside neighbourhood, where the Conservative leader spent his childhood. Supporters, staff and journalists crammed into the upstairs loft above an enormous grocery store built in an old CN railway locomotive shop, where the store sells pints of Ontario craft beer and glasses of wine.

There, Trudeau announced a Liberal government’s first act would be to cut taxes for Canadians with incomes between $44,700 and $89,401, presumably, those who fit the Liberals’ definition of the oft-referenced middle class. The same piece of legislation would increase taxes for the wealthiest one per cent of Canadians, those making more than $200,000 a year, by introducing a new 33 per cent tax bracket for them. (Currently, the highest rate is 29 per cent for those earning more than $138,586.) Parked next to Trudeau were two shopping carts full of groceries with signs indicating the Liberals’ Canada Child Benefit would be worth $490 a month for a typical family of four.

The Liberals were showing Canadians, Trudeau said, “that we have a clear plan to put more money in their pockets than Stephen Harper has been able to do, because he’s been out of touch and he hasn’t understood.”

The announcement was one of the more specific plans in the Liberal platform. And it came as some polls started to show the party stood a chance of forming a minority government. Trudeau’s team was cheerful, although quick to acknowledge there were still days of fighting left in the campaign.

It’s a surprising place for the third party to be: third in both its standing in the House when Parliament dissolved, and in the polls when the election campaign began. At the start of the last week of the campaign, the Liberals were leading in the polls.

The only people it may not surprise are the ones who work closest with Trudeau.

“You have to understand the things you can control and the things you can’t control,” a senior Liberal told Maclean’s. Things the Liberals can’t control include how much the Conservatives spend on anti-Trudeau advertising, and the boost the federal NDP enjoyed after the party won in Alberta in the spring. What the Liberals could control: “We were confident we had the best leader and the best plan.”

The plan has been three years in the making—from the time Trudeau kicked off his leadership run in October 2012. He focused relentlessly on developing his policies to respond to what he heard from Canadians, the senior Liberal said, reminding Maclean’s that press gallery journalists peppered Trudeau with questions from the beginning about what his platform would entail. But the long consultation period left him comfortable making policy decisions that could seem risky, such as planning to run a $10-billion deficit for three years, and increasing taxes for wealthy Canadians.

The idea of planning for a moderate deficit came about as far back as February, strategists say, when economic news made it clear the Conservatives could very well leave their own deficit in 2016, or only a minuscule surplus. Infrastructure spending would be a major part of the platform intended to make Canadians’ lives easier through better transit and shorter commutes. Those measures, Trudeau says, would both increase productivity and get parents home to their children sooner at the end of the workday. But the Liberals couldn’t promise the spending they planned without going into the red.

“It doesn’t take a rocket scientist to know our cities need infrastructure,” the senior Liberal said, citing heavily snarled trafﬁc in Toronto. The party’s strategists knew people in the cities and suburbs were sick of it. They were confident people need infrastructure investment more than a balanced budget, and—maybe more important—that over a long campaign, the Liberals could tell that story.

This 78-day campaign—the longest in Canadian history—has helped the Liberals in other ways, too. They needed the campaign to show voters “the real Trudeau,” the one who connects with people and who outperformed (admittedly very low) expectations at the leaders’ debates. The long campaign also let Trudeau sharpen his message to better explain policies such as tax increases for the wealthy and the Liberals’ support in the House for C-51, the Conservatives’ heavily criticized national security legislation. The Liberals said they didn’t like parts of the bill, but voted in favour of it, arguing they would change it if Trudeau takes power on Oct. 19.

“[The Conservatives’] biggest mistake was to give us 11 weeks,” Liberal candidate Rob Oliphant said as he canvassed an upper-middle-class neighbourhood full of maple trees and enormous detached houses in Toronto’s Don Valley West.

“Aside from all of their policies, that is.”

Oliphant was the MP for the riding from 2008 to 2011, losing the last race to Conservative John Carmichael by 611 votes. With polls suggesting voters are keen for a change in government, Oliphant points out that was the election where the NDP increased its vote in the riding by 1,200 votes. The message is that those votes are wasted, if the point is to get rid of Stephen Harper. Going door-to-door in khakis and a bright red jacket, Oliphant meets mostly supporters that morning. It’s a section of the riding that narrowly voted in his favour in 2011. Still, some people have concerns.

“Raising taxes could have a huge impact on us,” said one woman, whose combined income with her partner is $250,000 a year. Oliphant explains the tax increase wouldn’t apply to her, but she remains worried. “I’m not necessarily a supporter of Harper. I think Trudeau is great,” she said. But she thinks the Liberal definition of the middle class is “off” and could mean less money for her family.

“You’re talking to a lot of stay-at-home moms here with [household] income over $200,000,” says another woman, unloading bags from her car as a toddler fusses. That’s a target market for Harper’s income-splitting program. Oliphant optimistically calls her a soft Conservative supporter, hoping he can still convert her.

It may have been a bit cheeky of Trudeau to go to Leaside to promise his first act would be to raise taxes for people making more than $200,000 a year: The Don Valley West neighbourhood is one where small, two-bedroom bungalows can sell for more than $1 million, and where the average family income is more than $143,000. (The median family income in Canada is around $90,000.) Then again, it isn’t exactly unknown territory for the Liberals: Until Carmichael won in 2011, the party had held the riding since 1993, when John Godfrey defeated the PC incumbent.

A few days later, Trudeau continued his foray into Conservative-held territory with a speech at a campaign office in Barrhaven, an Ottawa suburb unaffectionately known as Far-haven. To get there, one drives past farmers’ fields and a pumpkin patch, straight into what had been the riding of Conservative Pierre Poilievre. With the riding boundaries redrawn, Poilievre is now running in a more rural riding just to the south. His former assistant, Andy Wang, is the Conservative trying to hold the Nepean riding against Liberal Chandra Arya.

With half an hour to go before the event, Liberal supporters took up every parking spot of the strip mall in which Arya’s office sits, with a crowd in front of the office and a line snaking around the lot. They started lining up more than two hours early, Liberal staff said.

To the voters who elected Poilievre three times, Trudeau had a message.

The expectations for this party are strange and hard to game out. Normally, a party that doubles its seats would be a great success. But with Trudeau’s name recognition and the party’s long history, never mind what the current polls suggest; some Liberals might be inclined to hope for more. Trudeau likes to say he’s a fierce competitor, and this election campaign has shown that to be true. But neither Harper nor NDP Leader Tom Mulcair is known for his soft-hearted disposition. Trudeau will need all the ferocity he can muster to emerge on top on Oct. 19.