Trudeau to use trade talks with Pence to weigh into U.S. abortion debate

Politics Insider for May 30: That Carney rumour, Pence to get an earful and Canadians return from China empty handed 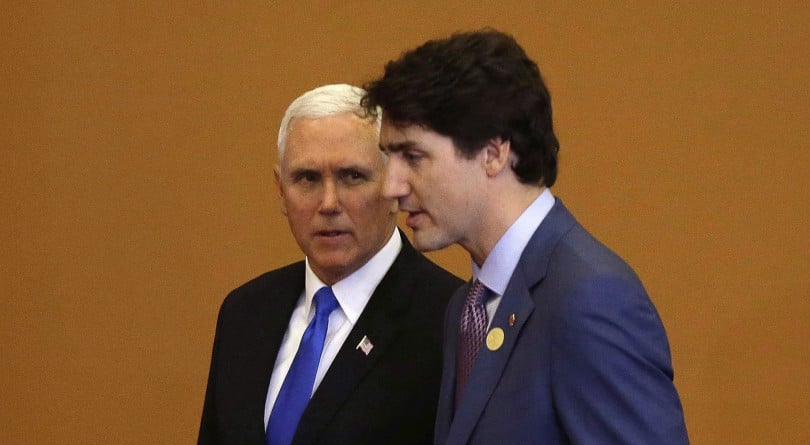 Crazy talk: It’s “totally ridiculous,” “dopey” and “boneheaded” to think some Liberal insiders are conspiring to replace Justin Trudeau with Mark Carney, say other Liberal insiders. On Tuesday the Toronto Star reported some top Liberals held a conference call where the prospect of Liberal defeat this fall came up, and the former Canadian central banker’s name was put forward as a Trudeau replacement. The Star followed up that story with comments from a parade of Liberal cabinet ministers and MPs all emphatic that the party is 100 per cent fully behind Trudeau. “We have an extremely strong leader of whom I am very proud,” said social development minister Jean-Yves Duclos. “He inspires me every day.” (Toronto Star)

Ordered into court: Of course one of the reasons Trudeau is in such a pickle is because of fallout from the SNC-Lavalin saga. But despite all the damage done in the name of helping the Quebec engineering company avoid a criminal conviction, a judge ruled SNC must stand trial on fraud and bribery charges. Quebec Justice Claude Leblond ruled prosecutors have enough evidence to move forward with their case, though for now that evidence is under a publication ban. Attorney General David Lametti can still offer SNC a deal to get out of the trial right up until a conviction is potentially handed down. (Global News)

A pensive moment: When U.S. Vice President Mike Pence meets with Trudeau today, the agenda will mostly focus on getting the USMCA/CUSMA trade deal ratified, but Trudeau won’t let Pence go without letting him know what he thinks of the recent spate of state laws banning abortions: “Obviously, I’m very concerned with the situation around the backsliding of women’s rights that we’re seeing through Conservative movements here in Canada, in the United States and around the world. I will have a broad conversation with the vice-president.” (Canadian Press)

Stick to trade, Conservatives shot back. “Look, the U.S. can do what they want. They have a healthy debate on a whole range of issues that will never come into our debate here in Canada and that’s the way it should be,” said Conservative foreign-affairs critic Erin O’Toole. “What upsets me about the Liberals is they will use foreign politics like that, as an attack line on us and I think Canadians are now seeing through that.”

Regardless, the U.S. abortion fight followed the Conservatives into the House Wednesday. After Bloc Quebecois MP Monique Pauzé sought unanimous consent for a motion asking the House to “reiterate that a woman’s body belongs to her and her alone, and recognize her right to choose an abortion regardless of the reason,” Bloc, Liberal, NDP, Green and Independent MPs gave her a standing O. Not so the Conservatives. All but one Tory MP stayed seated. (Global News)

Scramble on: The Trudeau government would like very much to go into the next election campaign with a fuller slate of kept-promises than it has right now. The problem is several key bills have yet to be passed into law. Which is why the next three weeks will be crucial for Trudeau, writes David Moscrop:

With Parliament set to rise on June 21, MPs are preparing for a summer filled with pre-election groundwork. But the government will be making the dash to sunny days with its briefcase full of legislation that has yet to be passed. Prime Minister Trudeau and his team will be under pressure to deliver on these commitments. That task will be made difficult by emboldened Independent senators and obstructionist Tory senators, as well as opposition members of Parliament who have concerns with the substance of pending legislation, wish to see the government embarrassed ahead of the election in October, or both. (Maclean’s)

One down: While the list of stalled bills is long, the Liberals secured one victory this week when their gun reform bill passed the Senate—immediately after which the Conservatives promised to repeal it if elected in October. (CTV News)

Eyesore: Ottawa may be the town that fun forgot, but it has its charms, writes Stephen Maher, in particular the architectural pleasures of Parliament Hill and the buildings that surround it—the National Gallery, the Supreme Court building, the Museum of History in Gatineau and the Chateau Laurier hotel, each building honouring those that came before it. Which makes the plan by the owners of the Chateau Laurier to bolt on a seven-storey addition to the hotel such a travesty:

Now the plans are headed to council, which can approve them, just as they normally approve big box outlets in Kanata once the traffic issues are sorted out, and the beautiful historic space at the heart of our capital will be permanently damaged.

Larco’s proposal resembles a computer heat sink or an air conditioner. It is in the bland modern style commonly used in condo developments, which people seem to like well enough, likely because it is close to a complete absence of style, a utilitarian commercial aesthetic perfectly appropriate for utilitarian commercial buildings.

It is entirely wrong, though, for the romantic skyline at the core of the capital. (Maclean’s)

I went to China and all I got was this lousy non-commitment: To no one’s surprise a delegation of Canadian parliamentarians who spent several days in China meeting with low-level officials about the release of two Canadians arrested on spy charges came back with nothing to show for it. Liberal MP Joe Peschisolido and six other MPs and senators told the officials China must be an “international responsible stakeholder” but all Peschisolido could do it “hope” they passed on the message to their superiors. (Globe and Mail)